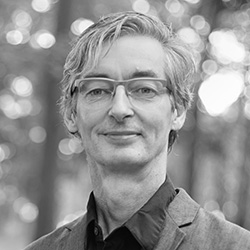 Christian R Pongratz is the Senior Advisor to the Provost and Professor of Architecture. From 2017-2019, he was the Interim Dean of the School of Interdisciplinary Studies and Education. In order to facilitate increased collaboration among New York Tech‘s disciplinary silos he is initiating new collaborative programs and teamwork driven projects engaging people, communities and industry. He co-founded the Creative Tech Innovation Council together with Isabel Draves (New York Creative Tech Week) and by forming transdisciplinary teams explores how innovation emerges at the intersection of design research, technology and business serving communities and solving broader environmental, social and economic issues.

Prior to joining New York Tech, Christian R. Pongratz was the director and founder of the Digital Design and Fabrication Program and Master of Science Specialization in the College of Architecture at Texas Tech University, where he also was a professor. He taught at the School of Architecture, University of Texas at Austin from 2000 – 2002, and was visiting professor at Yeungjin Jr. College, Taegu, Korea, the Busan International Architectural Design Seminar, Busan, Korea, and at the Architectural Association.

He is a jury member for the Pinnacle Awards by the MIA since 2007. He studied Architecture at TUM and Sci-Arc, and is a licensed architect in Germany with registration in Berlin. Before establishing his own practice, he worked in New York for Peter Eisenman and John Reimnitz, and was involved with the design of international, invited design competitions and with prestigious commissioned buildings.

Together with Maria Perbellini, in 2002 he co-founded and is a principal at pONGRATZ pERBELLINI Architects, an architectural design practice and research-oriented atelier investigating computation with material-based processes. PPA's expertise in digital design and fabrication technologies engages with an architecture of experience and explores geometries, textures, and surface structures, and their material properties, behaviors, and performances.

Selected current grant awards are the Texas Liberator Project, Design of Digital book and interactive teaching app with historical background, Interdisciplinary Collaboration between Honors College, History Department, Visual and Performing Arts, Media and Communications, Southwest Collection and Architecture, (P.I., Lead P.I. Aliza Wong), total $170,046, (2016-2017), and for Transforming Student Learning and Innovation through Design Research with Digital Craft in a new Interdisciplinary Design Center $104,465 (2014-17) from the CH Foundation; a gift in kind contribution totaling $277,340 in 2013 for the founding of a Robotics Mechatronics Lab; and together with Associate Dean Prof. Maria Perbellini, a gift of $750,000 in 2013 for a vision plan which proposes new interdisciplinary collaborations across campus with enhanced College facilities and a building extension, matched by TRIP with $225,000; This initiative increased in support to over $1.6 million by 2016.