New York Institute of Technology students Ashley Dent and Allan Andrews were two of only 124 student veterans in the United States selected to attend the 2019 Student Veterans of America (SVA) Leadership Institute in Washington D.C., September 10 through 13.

“I was beyond excited when I was notified that I was selected to attend the Leadership Institute,” said Dent, an advertising, public relations, and technology major and president of the Students Veterans Organization (SVO). “It was a breath of fresh air to be around so many military veterans who were all on the same journey that I was on. We all shared a lot of the same struggles and this is what made the time so special.”

The SVA serves 1.1 million student veterans across the country on their journey to achieve higher education. The organization offers services and support to ease the transition from military life to campus life. “The SVA honestly helped me in ways I have no words for except that I am thankful for the opportunity I received,” said Andrews, a hospitality management major and secretary of the SVO. 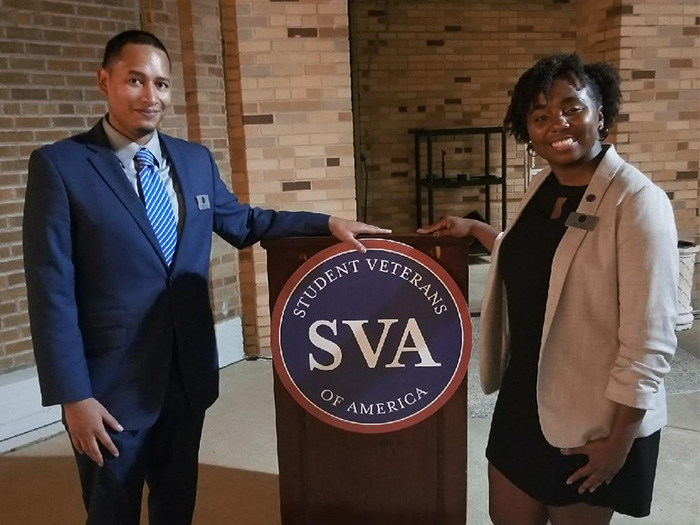 New York Tech’s SVO is just one way the university supports its student veterans. “Our Military and Veterans Affairs office has started several initiatives to better prepare our students for the global economy, centering on establishing extensive academic and social networks. A key component of this strategy is our increased partnership and participation with the SVA,” said Frank Rivera, M.S., director of Military and Veteran Affairs who himself is a veteran of the U.S. Air Force.

The 2019 SVA Leadership Institute provided an immersive program where attendees learned leadership skills as well as networked with fellow participants, facilitators, and mentors. “My experience at the Institute of Leadership was life-changing. I did not know there are so many individuals who want to help and support the student veteran population,” said Andrews.

Added Dent, “I was able to hear different perspectives and gain insights on how I can be a better leader, not only as the president of New York Tech’s Student Veterans Organization, but in my future endeavors as well. I learned the importance of networking and creating meaningful connections.”

The experience was an inspiring one for both Andrews and Dent, who sees herself running for Congress one day. “I want to give back to my community in any way that I can,” she said. “Although I don’t wake up and put on my military uniform, I can still serve my country in other ways. Being around so many lawmakers and advocates created a desire for me to want to do the same.”