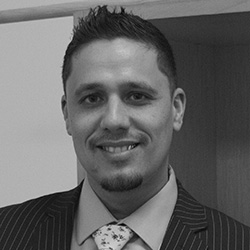 Frank Rivera is the director of military and veteran affairs at New York Institute of Technology.

Rivera served eight years in the United States Air Force as an electrical and environmental systems craftsman. He achieved the elite status of Flying Crew Chief, which afforded him the opportunity to travel the world while actively participating in the war on terror. As a staff sergeant, Rivera managed the electrical and environmental systems shop, including 28 airmen who worked under him.

Upon exiting the military, Rivera earned two bachelor’s degrees, one in economics and one in philosophy and religion, from New Jersey City University. After completing his undergraduate studies, Rivera continued his education at the university and earned an M.S. in national security studies.

In 2016 he began his career in higher education at the Middlesex County College Veterans Services Center. He quickly became the Center’s coordinator and received several national awards for his service to the veteran community.

Rivera came to New York Institute of Technology in January 2019 and has worked actively to engage student veterans and ensure their success. Since his arrival, Rivera has helped to increase membership and participation in the institution's Student Veterans Organization and serves as the chapter’s advisor. In January 2020 he was named a Chapter Advisor of the Year finalist by the Student Veterans of America.

In the U.S. Air Force