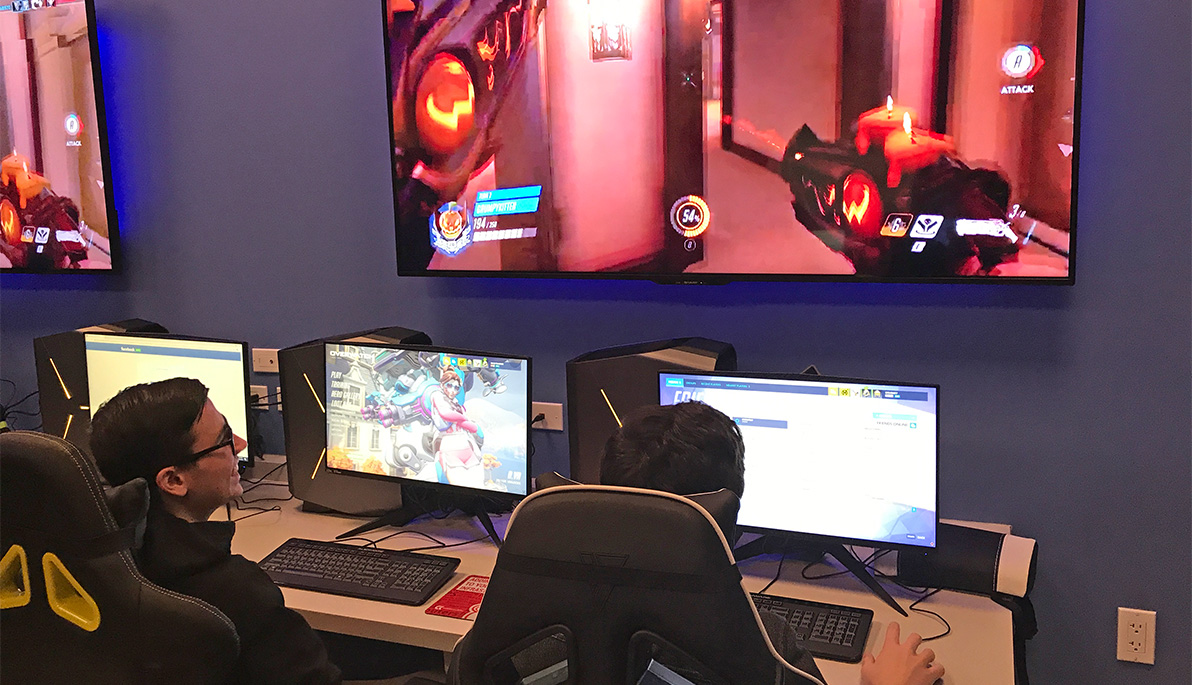 Pictured: CyBears and students can squeeze in a few rounds of Overwatch, League of Legends, and other games at NYIT’s new eSports arena in Wisser Library.

Room with a Pew Pew!

“We’re doing some great things here, and today is just another example of that,” said Dan Vélez, M.S., director of athletics. “This grew out of a want that students had. They came from our gaming club looking for a more competitive and organized platform to compete. We listened as an administration and launched the CyBears. Here we are with the next step in opening this arena.”

He emphasized the winning legacy of NYIT Athletics, which included numerous ECC and NCAA championships, and how the CyBears have already added their own chapter to this proud tradition with their December 2 victory over Molloy.

Following Vélez was Nada Anid, Ph.D., vice president for strategic communications and external affairs, who noted how eSports is redefining what it means to be a college athlete, especially in the digital age. 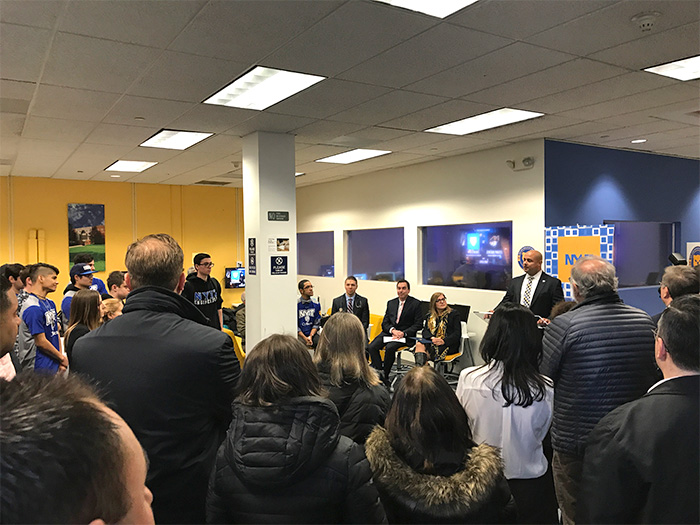 Director of Athletics Dan Vélez delivers opening remarks to a packed room of onlookers as NYIT unveils its eSports facility at the Long Island campus.

“Since technology is in our name, it only seems natural that New York Institute of Technology be at the forefront of collegiate eSports,” she said. In addition to providing an outlet for students to socialize and gain leadership skills, Anid mentioned how NYIT’s numerous academic pathways empower students interested in eSports careers, including the “build your own major” interdisciplinary studies bachelor’s degree that includes a Game Design and Visualization concentration.

“This is just the beginning of our eSports engagement,” she added. NYIT will host the ECC League of Legends Championship on March 30, 2019, at NYIT Auditorium on Broadway, which will be preceded by a symposium on eSports featuring medical experts, industry insiders, and top gamers discussing eSports health and fitness.

When first observing eSports, Balentine said that he was very interested in the player’s body movements, which included elbows, wrists, and eyes moving rapidly several times back and forth a minute. “That’s when I saw our opportunity to get involved,” he added while noting that with any repetitive motion, injuries will come over time.

By combining NYIT’s various healthcare programs—which include osteopathic medicine, physical therapy, occupational therapy, and other programs in the College of Osteopathic Medicine and School of Health Professions—the Center for eSports Medicine is not only able to treat injuries, but also to enhance performance.

He cited NYIT’s partnership with gaming chair manufacturers OPSEAT and Vertigear, both of which have donated equipment to the eSports arena. In return, NYIT will research how the CyBears interact with the chairs to optimize ergonomic performance in future designs. 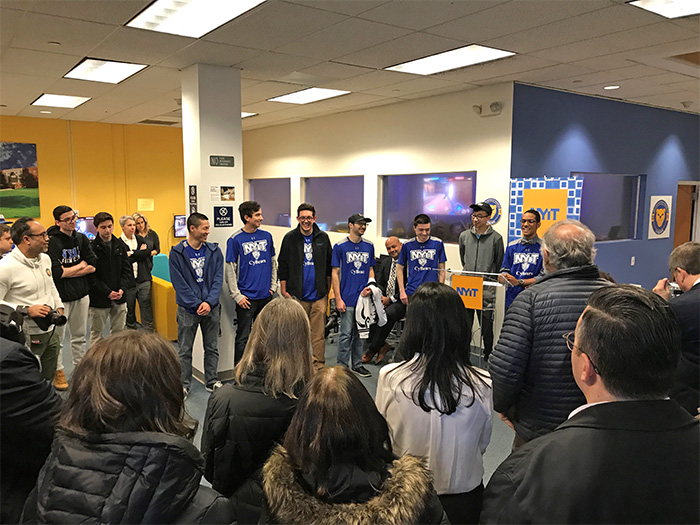 “What we’ve been able to do at NYIT is nothing short of extraordinary in the amount of time that we’ve done it,” said CyBears coach Elieser Duran (B.F.A. ’17). He added that the eSports arena is open to all NYIT students. “You can get some matches in while you’re waiting for another class to start. Or if you have some time, or a class gets canceled, you can come and play.”

ECC Commissioner Bob Dranoff noted that NYIT was a primary reason why the East Coast Conference launched its inaugural eSports season. “This is the world of intercollegiate sports today, and it’s an exciting change,” he added. “I’ve never seen the growth of something like eSports.”

Following Dranoff, the speakers gathered for the official ribbon cutting. Attendees then had the opportunity to tour the new facility, which features 12 Alienware Aurora R7 machines with the latest Intel Core i7K processors, 512 GB solid state hard drives, Nvidia GeForce video cards, and 27-inch monitors. In addition, 70-inch monitors give spectators the chance to follow the action. Attendees were also able to watch the CyBears compete in practice matches of Overwatch.