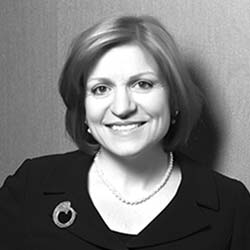 Nada Marie Anid, Ph.D., is vice president for Strategic Communications and External Affairs, a new office created by New York Tech in May 2018 dedicated to articulating New York Tech's mission as a premier polytechnic that fosters technology innovation and entrepreneurship.

A results-oriented leader with astute business acumen, Anid served as the first female dean of the NYIT School of Engineering and Computing Sciences since 2009. As dean, she spearheaded the creation of New York Tech's NSA/DHS National Center of Academic Excellence in Cyber Defense Education, its federally and state-funded Entrepreneurship and Technology Innovation Center (ETIC), and its Empire State Development's Division of Science, Technology, and Innovation (NYSTAR)-certified business incubator. She also led the overhaul of the school's academic offerings and research facilities, and the recruitment of outstanding faculty in the areas of cybersecurity and IT, bioengineering, and clean energy and water. Under her tenure, the school forged new community ties and partnerships, created undergraduate honors and research programs, increased its enrollment, and produced unprecedented research output. Globally, she led the U.S.-China EcoPartnership with Peking University, which was sponsored by the U.S. State Department, and the Pathways for Cleaner Production in the Americas projects with seven higher education institutions across Latin America.

Long an advocate for women pursuing education and career opportunities in STEM fields, Anid's efforts in this area include her recent book, The Internet of Women: Accelerating Culture Change, a "Salon Talk" interview on Silicon Valley's gender culture for Salon.com, and opinion articles in Forbes, Fox, University Business, and the Huffington Post, among others. In March 2019, Anid was instrumental in launching the Women’s Corporate Council, a group of female leaders whose goal it is to empower and inspire others within the New York Tech community and beyond. The council’s initial areas of focus include addressing mentoring and career development opportunities; work/life balance; network development; research on gender studies; and discussions on how to address cross-cultural and unconscious bias and bridging the gender gap.

She is also the recipient of numerous awards, including the Long Island Software and Technology Network (LISTnet) Diamond Award, which recognizes her significant contributions toward the advancement of women in technology on Long Island and her professional achievements in the technology field. In 2015, she received a 100 Inspiring Women in STEM Award from INSIGHT Into Diversity magazine. Long Island Business News three times named her as one of the Top 50 Most Influential Women in Business in recognition of her achievements in workforce and economic development.

Anid serves as chair of the American Institute of Chemical Engineers (AIChE) Public Affairs and Information Committee (PAIC) and is a member of the Managing Board of the Institute for Sustainability of AIChE. She also is a member of the Board of Directors of LISTnet, the Riverdale Nature Preservancy, and the Girl Scouts of Nassau County. Additionally, she is an active member of the American Society of Engineering Education (ASEE) and its Public Policy, Diversity, Data, and K–12 committees; the New York Academy of Sciences; the Long Island Regional Economic Development Council's Education and Workforce Committee; the Long Island STEM Hub; and the New York State STEM Education Collaborative.

Anid is an accomplished scholar and expert reviewer for the federal government and several engineering journals. She is a member of the editorial advisory board of the Journal of Environmental Progress and Sustainable Energy and served as guest editor of its January 2018 issue on the Food Energy Water Nexus.

She earned her Ph.D. in environmental engineering from the University of Michigan (Ann Arbor), and bachelor's and master's degrees in chemical engineering from KTH Royal Institute of Technology in Stockholm, Sweden. She is among the first engineers to study the role of vitamin B12 and other organometallic coenzymes in the dechlorination of important toxic molecules such as carbon tetrachloride and polychlorinated biphenyls.