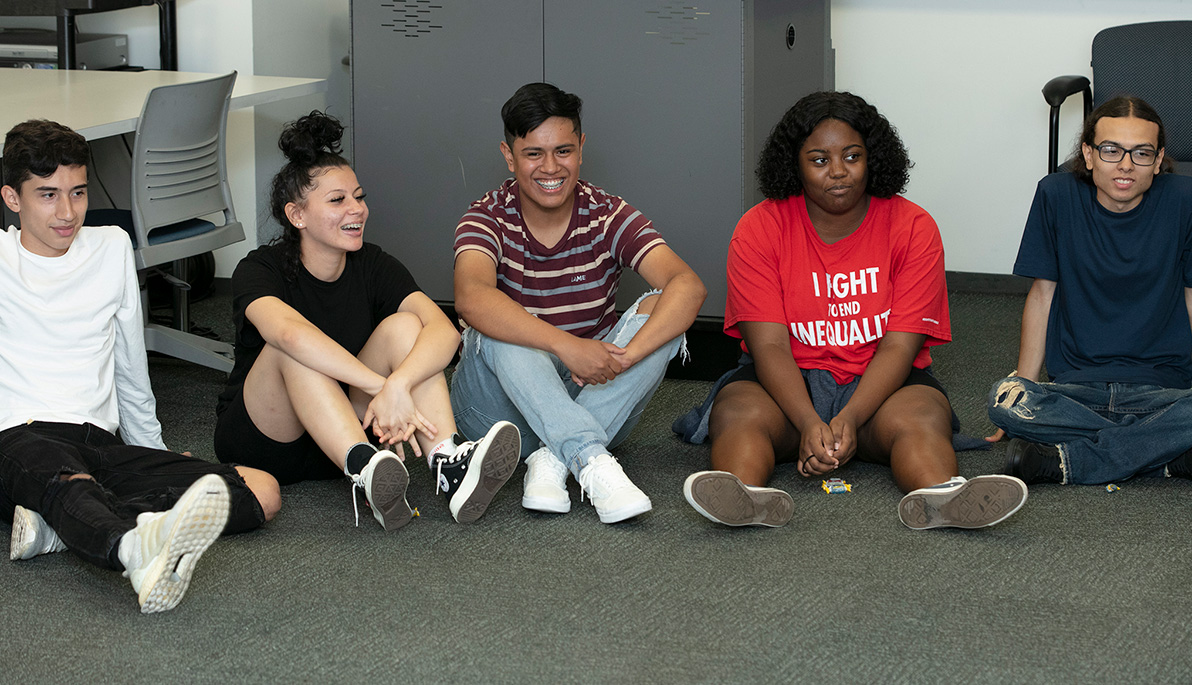 Pictured: Since 1970, HEOP at New York Tech has given disadvantaged students the opportunity to attend college. Here students participate in a team building exercise during a summer program in 2019.

February has traditionally been the month when student advocates travel as a united front to Albany, meet legislators face to face, and join forces with students from other New York State universities to ensure that their voices are heard on issues related to the state budget and student aid. This year, COVID-19 has not just kept student leaders from the state capital. Its far-reaching impacts have caused budget deficits that now jeopardize funding for myriad aid programs that private college students depend on.

As advocacy efforts play an intensely critical role in convincing elected officials at the state and federal level to consider the importance of funding student aid programs, New York Tech community members have stepped up to find unique ways to communicate with them—via old-fashioned advocacy letters as well as virtual meetings with legislators and heartfelt testimonials and videos posted on social media.

On February 10, through the efforts of the Commission on Independent Colleges and Universities (also known as CICU, a group of New York State-based private universities), Panero participated in group calls with U.S. senators and representatives, an effort coordinated by CICU with the National Association of Independent Colleges and Universities (NAICU). During one encouraging call on February 10, Senator Chuck Schumer (N.Y.-D) indicated he will support funding for independent colleges and universities to be included in the new relief act proposed by President Joe Biden and that he’s pushing for $40 billion in direct aid to New York State, with 40 percent going to municipalities. As a testament to New York Tech commitment to this effort, President Hank Foley, Ph.D., will be participating in Advocacy Day on March 15, as chair of the CICU Advocacy Committee.

“This is important as state legislators had told us the day before that they could not assure reinstating funds for Bundy Aid without additional federal funds to New York State,” said Panero. “He asked that we let him know how helpful such efforts are as leverage when negotiating the final aid package and requested that we encourage our students, faculty, and staff to send messages to his office in support of the federal aid package.

Through her affiliation with the Association of Program Administrators of CSTEP and STEP (APACS), Diane Williams, MSc, STEP manager at NYIT College of Osteopathic Medicine, has hosted 15 meetings for members to speak with legislators about state opportunity programs while also working on letter-writing and social media campaigns through the Student Aid Alliance. “On February 22 through 25, we have 22 appointments scheduled with legislators to focus on STEP and CSTEP, but we are asking for all opportunity programs, and TAP and Bundy funding as well. This way, it is fresh in their minds as they are negotiating the budget.”

CICU reported that Advocacy Day resulted in meetings with more than 100 state legislators, with more than 30 members of the New York State Assembly signing on to support Bundy Aid and a similar effort beginning to take hold in the state senate.

Calling on Everyone to Help Make a Difference—Now!

While these sustained efforts by students, staff, and faculty are beginning to see results, everyone involved is urging members of higher education to write to their state legislators directly or via New York Student Aid Alliance’s e-advocacy tool. Students are encouraged to post stories and videos about the importance of student aid on Instagram and Twitter with the hashtag #StandUp4StudentAid.

“We can still continue to ramp up our advocacy of student aid on all fronts through the end of February,” says Nada Anid, Ph.D., vice president for strategic communications and external affairs. “We want everyone at New York Tech to write letters and post messages on social media to our state officials, and to Senator Schumer, thanking him for his promise to secure funding for all universities—particularly in New York State, which can support the reinstatement of Bundy Aid, double Pell grants, and increases in TAP and opportunity funding.”