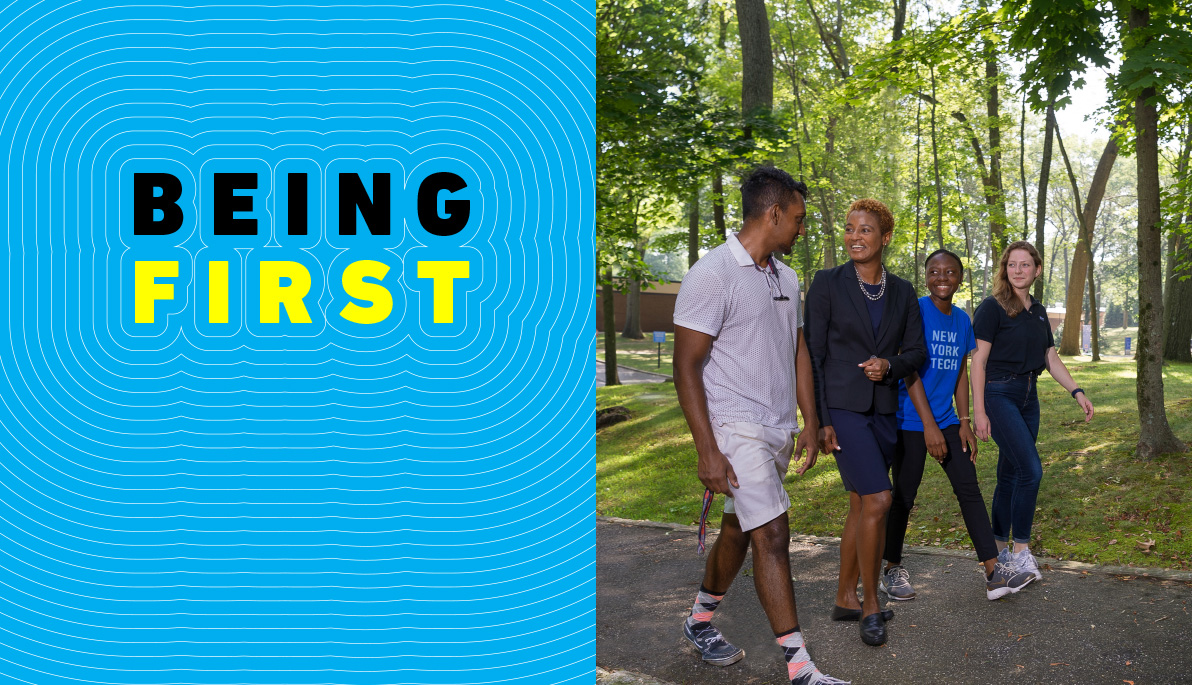 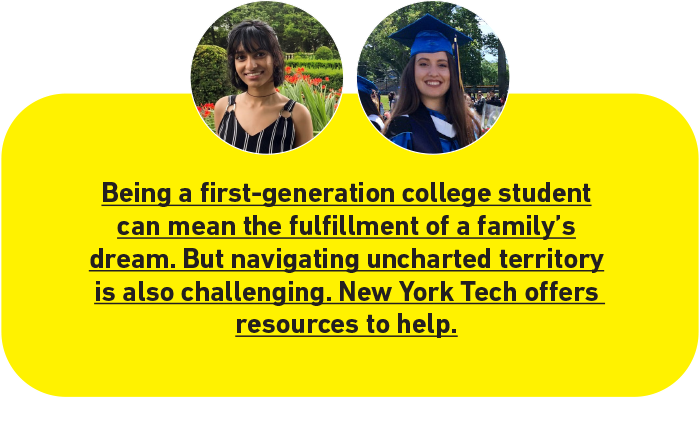 As a new transfer student to New York Tech’s Manhattan campus in fall 2019, Shwetha Jayaraj (B.S. ’21) was happily surprised to learn about the university’s participation in the National First-Generation College Celebration Day.

The oldest child of Indian immigrant parents, Jayaraj has grappled with her parents’ strict expectations—including not wanting her to go away for school—while also appreciating their support and the work ethic they instilled.

Jayaraj shared her experiences as a panelist during “I’m First! Sharing First-Generation Experiences,” one of the first programs sponsored by New York Tech’s First-Gen Taskforce. Created in summer 2019, the group provides programs and resources to support first-generation students in their success toward a college degree.

According to 24/7 Wall St., New York Tech has one of the most diverse student populations in the United States, with students representing 90 countries. A quarter of the university’s students identify themselves as the first in their families to attend college. And New York Tech extends the definition of “first-gen” to include students who are the first generation in their family to become U.S. citizens or students whose parents immigrated to the United States, with or without college degrees.

That’s where the need for extra support comes in. “A lot of our students don’t come from homes where the parents know how to navigate the college ecosystem,” says Francine Glazer, Ph.D., associate provost and founding director of the New York Tech Center for Teaching and Learning. These students may or may not be among the neediest in terms of academics or finances, but they almost universally tend to lack information about opportunities and processes.

At all of its campuses, New York Tech is galvanizing efforts to engage and support first-generation students, in essence, to help provide them with the information that they may not even be aware of.

Vasiliki Sgourdou (M.A. ’17) came to New York Tech from Greece and spent her first year figuring out the higher ed system in America. Neither of her parents attended college, and although she earned an undergraduate degree from Ionian University in Corfu, the European educational system is completely different. “I asked for help wherever and whenever I had the chance,” she recalls.

As a first-generation college student herself, Tiffani Blake, M.Ed., assistant provost for student engagement and development, understands the challenges of navigating the system. Since joining New York Tech, she has made support for first-gen students a priority. One of the first steps was the formation of the First-Gen Taskforce. “Our goal is to proactively engage this student population and connect them with resources and information rather than focus on interventions after students are having problems,” she says.

In addition to linking up with the organization I’m First to hold the National First-Generation College Celebration Day, the Taskforce established a First-Gen web page, a one-stop repository of links to student support services ranging from financial aid to resources for DACA and international students, along with practical tools such as a GPA calculator. Ongoing programming includes sessions focused on paying for college, academic resources, and making the most of the college experience.

“It is a collaborative effort because we realize it takes a holistic approach to support these students,” Blake says.

“This year, we really ramped up our efforts to support first-gen students by assigning designated points of contact in admissions, in financial aid, and in the bursar’s office,” says Karen Vahey, Ed.D., dean of admissions and financial aid and a member of the First-Gen Taskforce. “We’re letting students know, ‘If you’re first-generation and you have questions, this is who you should talk to.’”

“While it’s common for colleges to support the challenges of women, LGBTQ students, or students of color, I appreciated that they recognized and acknowledged the struggles of first-generation students.”

The university is also streamlining requirements to make the admissions and financial aid application processes as easy as possible for students who may be doing it on their own. That starts with waiving the application fee for first-generation students. The admissions office also allows students to self-report their SAT/ACT scores instead of requiring an official report. “Those cost money,” says Vahey. “If the student is admitted and chooses to attend, then we’ll need the official report, but we’re no longer requiring them to spend that money before then.”

The university has also moved to a test-optional policy. “We’re really trying to remove all barriers to apply,” she says.

To further assist the students, the Offices of Admissions and Financial Aid host virtual information sessions designed to walk students through the process of applying for admission and for completing the Free Application for Federal Student Aid (FAFSA). Vahey says they also work on an individual basis with students and their high school guidance counselors based on a student’s circumstances.

For Vahey, the work is personal. Like Blake, she was a first-generation college student. “When I was in college, I always felt like there was this hidden curriculum, stuff that my classmates knew that I just didn’t,” she says. “It was a source of anxiety. So, if I can, I want to provide resources to remove that anxiety for students or to let them know we can figure it out together.”

Once admitted, students benefit from a gamut of programs and support systems that, while designed for the general student body, can be specifically helpful to those students who aren’t receiving college guidance at home. 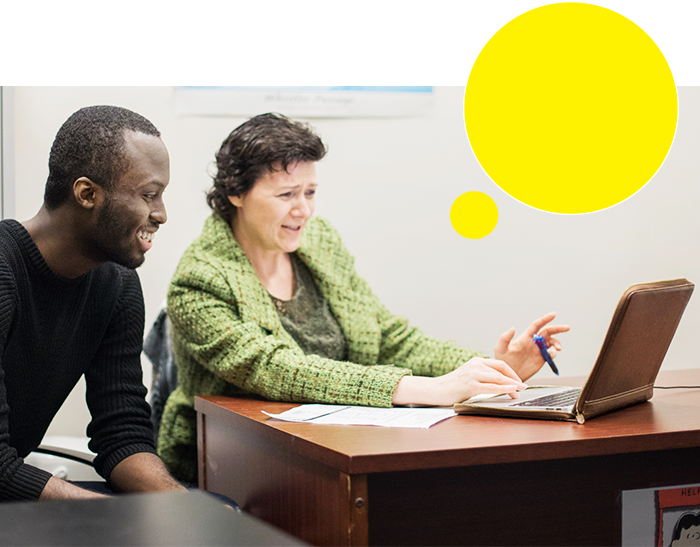 The goal of the First-Gen Taskforce is to proactively engage with students and connect them with resources and information.

One of those initiatives is Achieving Collegiate Excellence (ACE). Piloted in 2019, the program was developed as a result of the Student Success Taskforce created by Junius Gonzales, M.D., M.B.A., provost and vice president of academic affairs. The goal of the program is to provide academic support for students struggling to meet the GPA requirements of their academic scholarships. And while not aimed specifically at first-generation students, some elements have been developed with those students in mind.

ACE includes three components: an academic coach typically from the student’s major area of study, tutoring and academic skills development, and a self-guided online success course that includes both required and elective modules based on the student’s needs.

One of the optional success course modules is a guide to academic requirements, essentially a primer on college basics. “It goes over a lot of terms that many of us take for granted but aren’t common knowledge for everyone,” says Kristen Smith, Ed.D., registrar and a member of the Student Success Taskforce who helped lead the program. “That includes explanations of what a GPA is, how it’s calculated, and what credit hours are.

“The goal is for students to be successful, which means continuing to stay in school and graduating,” says Smith. “Our data shows that students who complete ACE complete more credits and have a higher GPA.”

Developing Skills for the Workplace

The Office of Experiential Education “works to get the New York Tech community civically, electorally, and politically engaged,” says Senior Director Amy Bravo, M.A. “We help students identify the skills they need to be effective and then provide different types of opportunities for them to develop those skills.”

There’s a lot of one-on-one. “More important than our programs or services is our approach,” says Bravo. “We really take the time to get to know students as individuals and ask questions about their experience.”

It’s not uncommon, particularly among first-generation students, to find that they’ve chosen a major at the preference of their parents, thinking it will lead to a lucrative career. “But when the student may not even like the field, that creates a lot of pressure and stress,” says Bravo. “By having that knowledge, we can work with students based on their individual situation.”

Bravo and her staff freely give students their cell numbers. “I’ve had students text me that they can’t come back to school because their family can’t afford it. And because they reached out to me, I could point them to different types of opportunities that maybe they didn’t know about.”

Those personal touchpoints can make all the difference. Jayaraj spent three years living at home in Connecticut while commuting to her nearby state university. She was itching to spread her wings and began exploring schools in New York City.

She found the perfect fit with the interdisciplinary studies program. She met with an academic advisor and received the guidance she needed to complete the admissions application and FAFSA on her own.

Despite being resistant, Jayaraj’s parents accompanied her to an accepted students’ orientation program. Blake sat down with the family and talked them through their concerns. “It calmed them down and really made all the difference,” she says.

Jayaraj received a bachelor’s degree in interdisciplinary studies, with concentrations in computer science, social sciences, and technology in spring 2021. Even her parents came around. “Living at home again during the height of the pandemic, I think they could see how much I’d grown,” she says. “I couldn’t imagine doing this without their approval or support, and I thank New York Tech for that.”

At the “I’m First: Sharing First-Generation Experiences” panel discussion, first-gen students Christopher Garzon and Shwetha Jayaraj, as well as Karen Vahey and Tiffani Blake, who led the talk, spoke about the challenges students encounter, including acclimating to college schedules and workloads and introducing the college student lifestyle to their families. 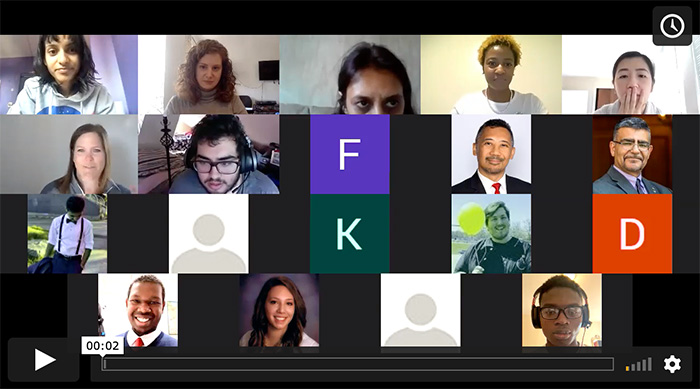