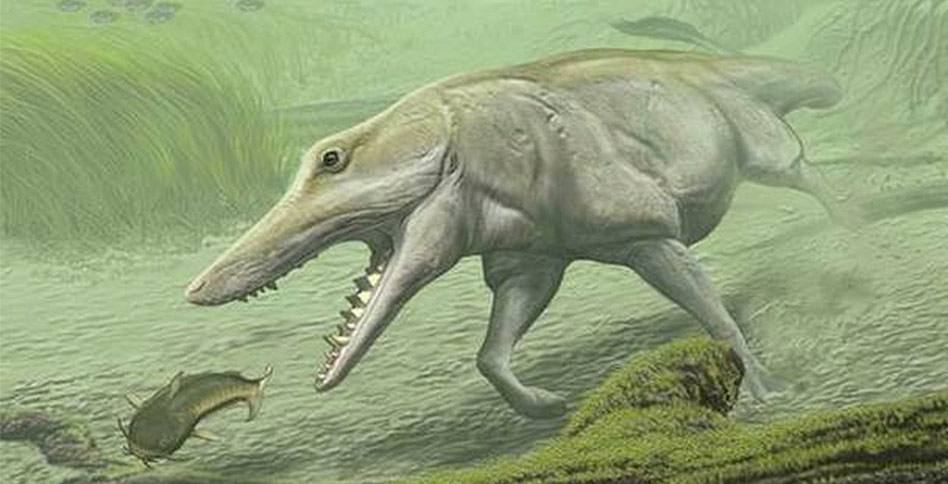 Comments: There are currently 4 species of Pakicetus: Pakicetis inachus, P. attocki, P. calcis, P. chittas. Although many skeletal elements of Pakicetus have been found, all were isolated, and our knowledge of Pakicetus comes from educated guesses that associate these bones together to form partial skeletons. Given these uncertainties, we have decided to focus on the genus Pakicetus, instead of any particular species.

Range: This whale has been found at several localities in the Punjab and North-West Frontier provinces of Pakistan. At this time, Pakistan was on the edge of a great shallow seaway called the Tethys Sea, extending from the present-day Mediterranean to India. Pakicetus has not been found from deposits of the Tethys Sea but instead from adjacent river and floodplain deposits, which also yield bones of land dwelling mammals. Samples from the teeth of Pakicetus yield oxygen isotope ratios and variation that indicate Pakicetus lived in freshwater environments, such as rivers and lakes.

Anatomy: Pakicetus looked very different from modern cetaceans, and its body shape more resembled those of land dwelling, hoofed mammals. Unlike all modern and possibly all other fossil cetaceans, it had four fully functional, long legs. Pakicetus had a long snout; a typical complement of teeth that included incisors, canines, premolars, and molars; a distinct and flexible neck; and a very long and robust tail. As in most land mammals, the nose was situated at the tip of the snout. Reconstructions of pakicetids that followed the discovery of composite skeletons often depicted them with fur; however, given their close relationships with hippos, they more likely had sparse body hair.

Locomotion: The skeleton of Pakicetus resembles those of many other even-toed hoofed mammals (e.g. deer, camel, pigs) and appears to be adapted for running at high speeds. However, the limb bones are quite dense, a trait that aquatic animals use to keep from floating to the surface. Together, these traits suggest that Pakicetus represents an early stage in the evolution of cetaceans, one where many running adaptations were retained but rarely used. In fact, the density of the limb bones of Pakicetus is so great that they would have been at increased risk of breakage during running. Instead, the density suggests that it walked on the bottom of rivers and lakes like the hippopotamus. Given that the hippopotamus is the closest living relative of cetaceans, Pakicetus and hippos may have inherited this behavior from their common ancestor. The large tail of Pakicetus is possibly a specialization for aquatic locomotion, although exactly how is unclear. The only other possible aquatic characteristics evident in its skeleton are scars on the toe bones that indicate strong muscles for separating the toes. Such muscles are consistent with webbed feet that were used for aquatic locomotion.

Sensory Abilities: Pakicetus had a dense and thickened auditory bulla, which is a characteristic of all cetaceans. The bulla is the bone of the skull that formed the floor of a cavity that housed the middle ear ossicles (the malleus, incus, and stapes). The thickened part of the auditory bulla was suspended from the skull, allowing it to vibrate in response to sound waves propagating through the skull. Normally, sound waves in air are reflected when they encounter a skull because of the great difference in density between bone and air; however, the density of water is much closer to that of bone. Underwater sound would have entered the skull of Pakicetus and caused its bulla to vibrate. The bulla was in turn connected to the chain of middle ear bones (i.e. malleus, incus, stapes), which transmitted the sound to the organ of hearing. Thus the thickened bulla of Pakicetus is interpreted as a specialization for hearing underwater sound. The sound passage via the external ear of Pakicetus was intact and was similar to that of other mammals. Based on this, Pakicetus retained the ability to hear airborne sound. The eyes of Pakicetus faced to the side and slightly upward. This, in combination with its inferred diet (see below) and inferred ability to walk on the bottom, suggests that it attacked its prey from below.

Diet: Well-developed puncturing cusps (incisors) and serrated cheek teeth indicate that Pakicetus ate flesh, most likely that of fish. The molars have steeply inclined wear facets that formed when the upper and lower teeth contacted during chewing. Based on the orientations of the wear facets, Pakicetus sheared its prey into smaller pieces before swallowing. One unresolved question is how exactly did Pakicetus catch its prey? Its skeleton bears no evidence that it could move fast in the water. Thus it is unclear if it was an active predator or if instead it ambushed unsuspecting prey that wandered too closely.