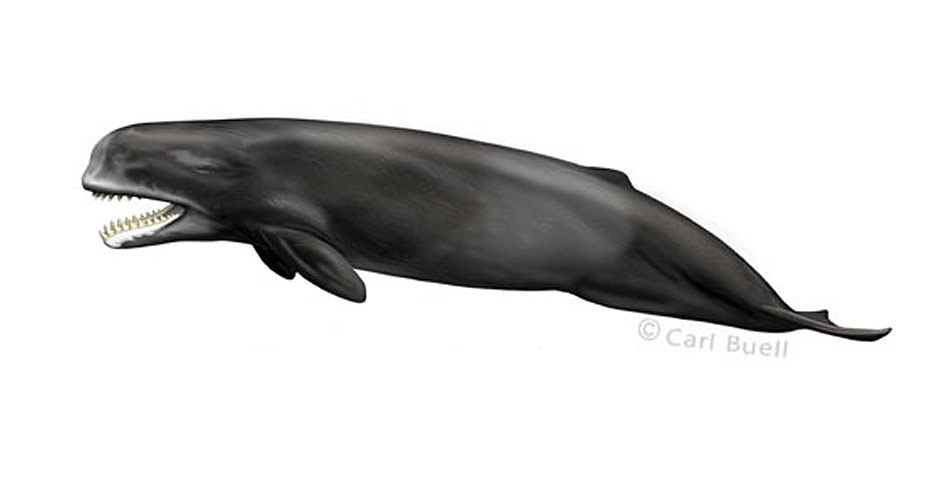 Note: This species was originally named Leviathan melvillei in the summer of 2010. As it turned out, the name Leviathan had already been used for a mastodon, an extinct type of elephant. Rules established by the International Code of Zoological Nomenclature prohibit this, otherwise confusing situations could develop because different species share the same name. Thus the authors renamed their new species Livyatan, which is the original Hebrew spelling (Leviathan is the English spelling).

Range: The only known specimen of Livyatan was reported from Peru, indicating that it inhabited the southeastern Pacific Ocean.

Size: Based on the size of the 3 meter (approximately ten feet) long skull and on comparisons with other sperm whales, Livyatan had a body length of 13-16 meters (45-60 feet).

Anatomy: The skull and lower jaws of Livyatan are gigantic and massive. Unlike the modern sperm whale (Physeter), Livyatan possessed massive, deeply rooted upper teeth and a short, wide snout. The modern sperm whale lacks upper teeth, and has a very long, less robust snout. Similar to the modern sperm whale, Livyatan exhibited a concave surface on the top of the skull called the 'supracranial basin,' which presumably housed a large fluid-filled sac called the 'spermaceti organ'. The teeth of Livyatan are large (14 inches long, 4-5 inches in width – nearly the size of a 2-liter bottle of soda, and more than double the size of the largest known Tyrannosaurus rex teeth), have sharp tips, and bear deep gouges from wearing against other teeth.

Locomotion: Although most of the skeleton of Livyatan is unknown, primitive sperm whales of a similar evolutionary grade, like Zygophyseter,have skeletons that are much like those of modern sperm whales. This suggests that Livyatan was fully marine and an efficient swimmer.

Sensory Abilities: The skull of Livyatan has a large depression on the top of the skull (the 'supracranial basin'), which in modern sperm whales houses the 'spermaceti organ' and the melon, two soft tissue organs which function in echolocation. This suggests that Livyatan could echolocate in a manner similar to modern sperm and pygmy sperm whales (Physeter and Kogia).

Diet: The snout and the teeth of Livyatan indicate that it fed in a manner that is very different than the modern sperm whale, Physeter. The modern sperm whale feeds on large squid using oral suction, and its teeth are not used for chewing prey. The deep diving capabilities of Livyatan are as yet unknown, but the modern sperm whale Physeter is the deepest diving marine mammal, allowing it to pursue large squid at great depths. The only hard parts to squids are the beaks, which are composed of chitin (a hard protein structure; chitin also forms insect exoskeletons). The robust snout and massive lower and upper teeth of Livyatan are evidence that its prey were larger and tougher than squid. Additionally, the relative size of the attachment area for the temporalis - the primary jaw closing muscle - is much larger (relative to skull size) than in Physeter, and is similar to that of the killer whale (Orcinus orca). It has been hypothesized that due to many of these features, Livyatan occupied a giant-killer whale like niche, and preyed upon baleen whales and other large marine mammals. The mouth of Livyatan is approximately six feet long and four feet wide – three times the size of the mouth of the killer whale (Orcinus), and large enough to fit an adult human (or the entire head of a Tyrannosaurus rex).