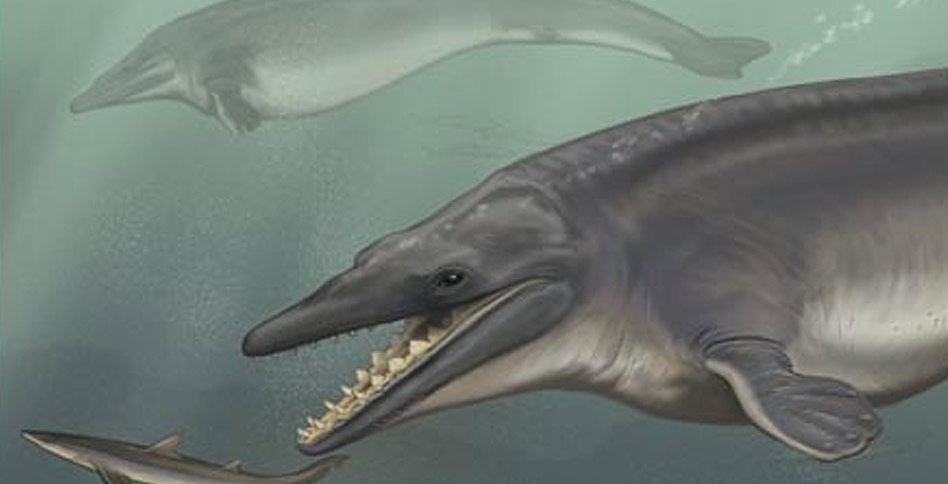 Range: Dorudon atrox is known from the famous "Valley of the Whales" locality (Wadi al Hitan) in Egypt, indicating that it inhabited the ancient Tethys Sea, which used to connect the Mediterranean Sea and the Indian Ocean.

Size: Dorudon atrox is estimated to have been around 5 meters in length (approximately 16 feet) as an adult, similar in size to the modern beluga (Delphinapterus leucas).

Anatomy: Dorudon, along with other basilosaurids, differed from all modern cetaceans in the shape of its head and teeth. Dorudon has a long, narrow snout, and almost certainly lacked the bulbous 'melon' that forms the spherical bulge on the facial profile of modern toothed whales. The teeth of Dorudon are still heterodont (teeth in different parts of the mouth look different) and can be identified as incisors, canines, premolars, and molars. Modern toothed whales have largely homodont teeth (all teeth in the mouth are similar in shape) and an individual tooth cannot be identified to a specific tooth type. Additionally, the largest cheek teeth of Dorudon are triangular, blade-like, have two widely separated roots, and have coarsely serrated crowns. The teeth of modern odontocetes are single rooted and typically have a single cusp. Dorudon also possessed very small and simplified hindlimbs.

Locomotion: Dorudon shares many specialized features with modern whales. The pelvis is not attached to the vertebral column, and the hindlimbs, although present, are dramatically reduced as compared to land mammals and even to earlier whales. This suggests that Dorudon was not able to 'haul out' on land like modern seals, and was fully marine, like most modern cetaceans. The shape of the vertebrae at the end of its tail is similar to that of modern cetaceans, suggesting that Dorudon would have had tail flukes and used them to move through the ocean. The forelimb is in many ways intermediate between those of land mammals and modern cetaceans – the humerus is not as short as in modern whales, and some movement at the elbow was still possible. In modern cetaceans, the elbow is rigid and contributes to a stiff flipper.

Sensory Abilities: Because Dorudon has a very large hole (foramen) in the lower jaw like modern toothed whales, it is likely that Dorudon was able to hear underwater in a similar manner. Additionally, the jaw adjacent to this hole is very thin, suggesting that sound waves could travel through the bone and then a fat pad, which channeled sound waves into the bony middle and inner ears. Additionally, features of the inner ear indicate that Dorudon was not able to detect high frequency sounds like modern odontocetes, and therefore could not echolocate.

Diet: Dorudon is one of a few fossil cetaceans for which undigested, fossilized stomach contents have been found. The bones of two fish were found within the ribcage of a Dorudon skeleton, suggesting that this species fed on fish. Given the large space in the skull for the temporalis muscle, which closes the jaw, and the thickness of the incisors of Dorudon, it is possible that this whale fed on smaller marine mammals as well.

References Consulted: Uhen, M.D. 2004. Form, function, and anatomy of Dorudon atrox (Mammalia, Cetacea): an Archaeocete from the Middle to late Eocene of Egypt. University of Michigan Papers on Paleontology 34:1-222.