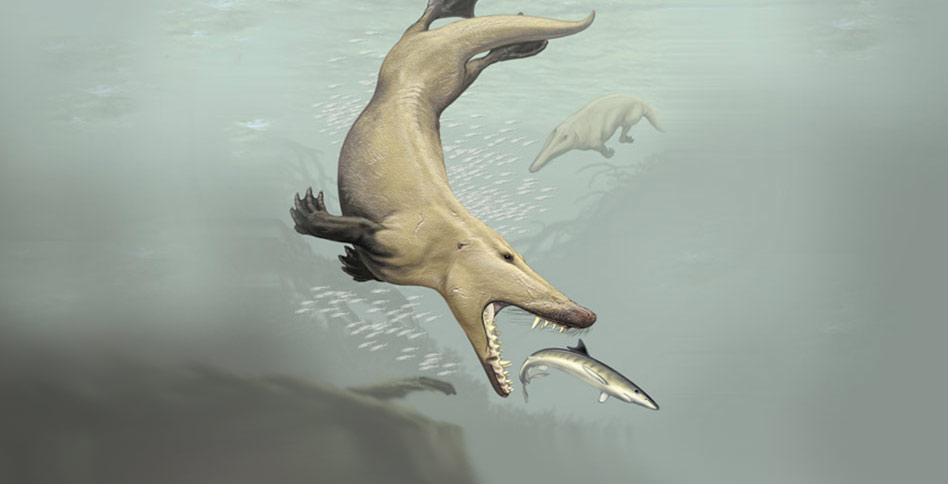 Range: The few specimens of Ambulocetus natans have all been found in Pakistan, in sediments that were deposited in the warm coastal waters of the Tethys Sea. This part of the Tethys disappeared when the Indian tectonic plate slid into the Eurasian plate, causing the Himalayan Mountains to gradually rise up.

Size: Ambulocetus is approximately 10 feet in length, based on a nearly complete skeleton of one individual.

Anatomy: The name Ambulocetus means “walking whale,” thus it should not be surprising that this ancient whale looked very different from modern cetaceans. Ambulocetus had a long and flexible neck, front limbs with flexible wrists and fingers, powerful legs with large feet, and a long and robust tail that likely lacked tail flukes.

Locomotion: Based on its skeletal proportions, it has been suggested that Ambulocetus moved through the water much like an otter. Like otters, the legs and feet would push backward together, the spine would arch, and the tail would have moved upward. One important difference from otters is that in Ambulocetus the feet, not the tail, would have provided the main force for swimming. Gingerich (2003) suggested instead that Ambulocetus used alternate leg paddling to move through the water (i.e. the dog paddle), with the tail acting much like a rudder.

Most paleontologists think that Ambulocetus could have walked on land, although it was probably slow and awkward. Organized bony struts in the leg bones of Ambulocetus and a solid connection between its pelvis and the base of its spine suggest that it could have supported its body weight on land. That said, how frequently Ambulocetus traveled on land is unclear. While on land, its elbow and knee were habitually flexed, and its feet were solidly planted on the ground, unlike modern hoofed mammals, which stand on their toes. Together, these anatomical features suggest that Ambulocetus frequently rested with its chest on the ground. Another explanation for the bony struts in the leg bones of Ambulocetus is that it walked on the bottom of rivers and lakes, much like the modern hippopotamus. Under this scenario, Ambulocetus rarely, if ever, came out on land. Additional studies on the limb bones of Ambulocetus are needed to clarify the mode of locomotion in Ambulocetus.

Sensory Abilities: What features can be seen in the skull of Ambulocetus indicate that it could hear underwater sound. The lower jaw has a large cavity, which in modern toothed whales, houses an extensive pad of fat. This pad of fat channels sound from the lower jaw to the ear, a system that works well in modern toothed whales. Although the ear bones are not well preserved, based on older and younger fossil cetaceans, Ambulocetus may have retained an ability to hear airborne sound. The eyes of Ambulocetus were placed high on the head and partially looked upwards, or forward if the chin is depressed. A similar position occurs in the hippopotamus and suggests that this early whale swam submerged, except for its eyes. If Ambulocetus walked on the bottom of rivers and lakes, then the upward facing eyes could have helped it locate prey swimming above.

Diet: The tall, sharp molars of Ambulocetus suggest that it ate fish and/or other animals that strayed into the water. The large space for the temporalis muscle, which closes the mouth, indicates that it had a very powerful bite. Thewissen and colleagues suggest that alligators and crocodiles may be good living analogues to Ambulocetus. They speculate that in addition to feeding on large fish it may have attacked prey that came to the water’s edge to feed or drink. Although plausible, this scenario so far lacks direct evidence.