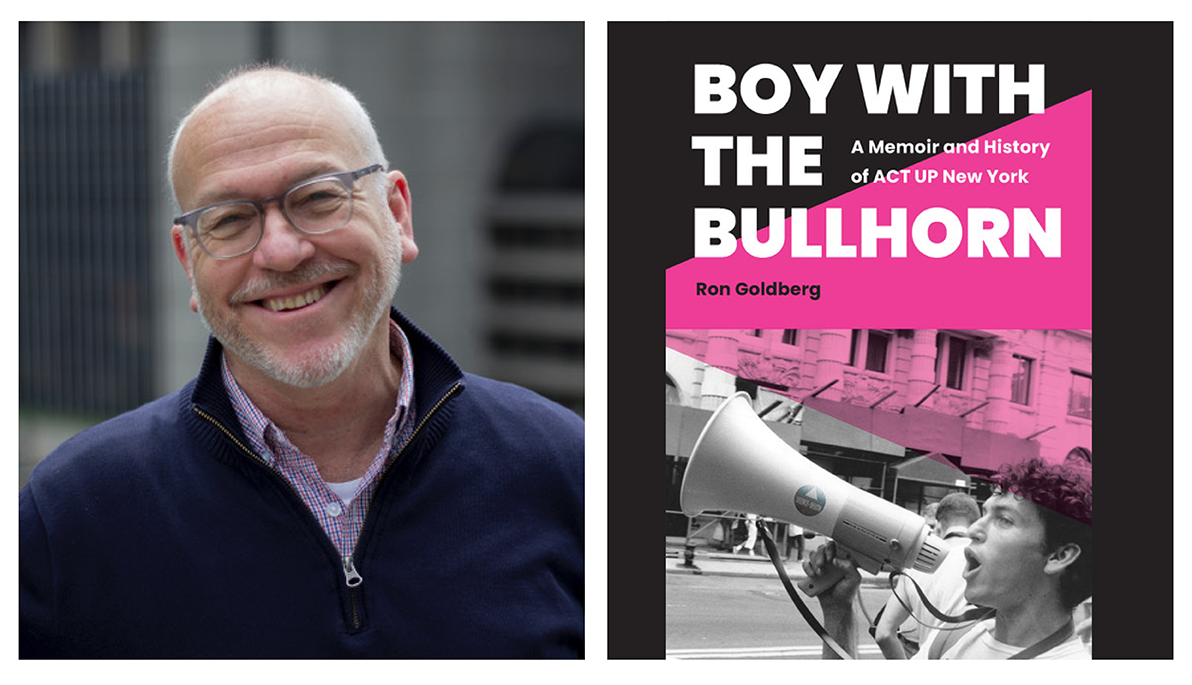 Writer, activist, and New York Tech web content editor Ron Goldberg spoke about his new book Boy with the Bullhorn: A Memoir and History of ACT UP New York at the Dean’s Digital Café event on November 17. The book offers an in-depth look into how activist strategies were developed and deployed through the organization AIDS Coalition to Unleash Power (ACT UP) in the 1980s, during the darkest days of the AIDS epidemic.

Goldberg began the talk with a history of the disease. “It’s often said that the AIDS crisis in the United States is usually dated to 1981 [as seen] in the New York Times article on July 3. Actually, the first article was in New York Native, a gay New York tabloid a few months earlier. And we now understand that AIDS was actually present in the United States far earlier,” said Goldberg. “The first case was a young teenager who contracted it in the 1960s, a Black teenager. There was also prior to 1981 talk of ‘junkie pneumonia’ and the ‘dwindles.’ “What made the AIDS crisis ‘pop,’ if you will, was that it was suddenly happening in white gay men who had access to healthcare and had access to doctors.”

He then explained how the disease works. HIV (human immunodeficiency virus) suppresses the immune system so that people can contract opportunistic infections (OIs), including Kaposi’s sarcoma and pneumocystis carinii pneumonia. If someone was HIV positive and had an OI, which was used by the Centers for Disease Control and Prevention (CDC) to define AIDS, that person had AIDS.

At the time, the disease was based on the infections that happened in gay white men. It did not include the infections that were happening in the bodies of women or in the bodies of HIV drug users. “One of ACT UP’s big battles was to get the CDC to expand the definition so that everyone who had AIDS and had these opportunistic infections would be able to participate in clinical trials, would have access to services and support networks that were available to people with the official definition of AIDS,” he said.

“Up until the time that there was a drug cocktail (which we now have), which was 1996-1997, AIDS equaled death,” said Goldberg. HIV tests weren’t available until 1985 and treatments until 1987, and the treatments were very expensive.

AIDS was not just a medical crisis, but a political one as well. President Ronald Reagan did not say “AIDS” until 1985 and made his first speech on the crisis in 1987. By then, there were 32,000 cases and 18,000 people who died from the disease. At the time, “the media didn’t really care to cover AIDS…the only place to find information was the gay press,” said Goldberg.

Led by American playwright and gay rights activist Larry Kramer, the gay community founded ACT UP in 1987. The organization’s goal was, and still is, to bring an end to the AIDS epidemic by working to bring changes to legislation and public policies. Goldberg joined the group and became involved, including planning protests and events, and becoming ACT UP’s unofficial “chant queen,” as the group confronted politicians, scientists, drug companies, religious leaders, and the media.

During the discussion, Chief Medical Officer and Vice President for Equity and Inclusion Brian Harper, M.D., spoke about many of the patients he treated during the early years of the AIDS crisis and how it relates to the ongoing COVID-19 pandemic. “From a clinical perspective, HIV was more of a chronic disease and there was a lot more pain and suffering that was involved with HIV as you went through the course of the disease as opposed to Coronavirus, when initially they didn’t know how it was treated, and people would die fairly quickly as result of that,” he said.

During the Q&A portion of the discussion, Michael Schiavi, Ph.D., professor and author of Celluloid Activist: The Life and Times of Vito Russo, praised the book. “I have read a lot of LGBT history, a lot of AIDS history, honestly, this book is one of the best histories I’ve ever read,” he said. “His research is stunning, the writing is fantastic, the sense of humor, the level of humor that he manages to weave through all the tragedy of people dying. It’s a superb book.”