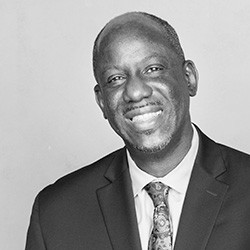 Brian Harper, M.D., is New York Institute of Technology's Vice President for Equity and Inclusion and Chief Medical Officer, overseeing the Academic Health Care Centers in Old Westbury and Central Islip. Harper also serves as an Associate Professor at New York Institute of Technology College of Osteopathic Medicine (NYITCOM), where he educates future physicians on the tenets of clinical medicine.

Building on Harper’s role as Co-Chair of New York Tech's Diversity, Equity, and Inclusion (DEI) Task Force, in 2020 he was appointed to the newly created position of Vice President for Equity and Inclusion. Under his leadership, a team of faculty, students, and staff are charged with pursuing projects, activities, and programming that promote diversity, equity and inclusion, and creating a roadmap and strategies for continued success in these areas.

Harper has worked as a physician at the Rikers Island Medical Unit, served as the first Director of the Bureau of HIV Services at the Nassau County Department of Health, and as the Senior Vice President of Community Affairs at the Nassau University Medical Center. In this role, Harper also served as the medical director for a network of seven community health centers, where he remodeled medical services to conform to hospital standards and successfully passed two JCAHO (Joint Commission on the Accreditation of Healthcare Organizations) surveys.

Harper was then appointed as the first African American Commissioner of Health for Suffolk County, N.Y. During his tenure, he successfully managed a department of 1,500 employees with a budget of approximately $450 million. Harper also created innovative programs including a HIV Commission and an Office of Minority Health to address health inequities. Harper then served as the Chief Operating Officer and Medical Director of the Ralph Lauren Center for Cancer Care and Prevention. This center was a partnership between Memorial Sloan Kettering Cancer Center and North General Hospital that was initially designed to provide quality cancer care to the residents of Harlem and surrounding areas, irrespective of a patient’s ability to pay.