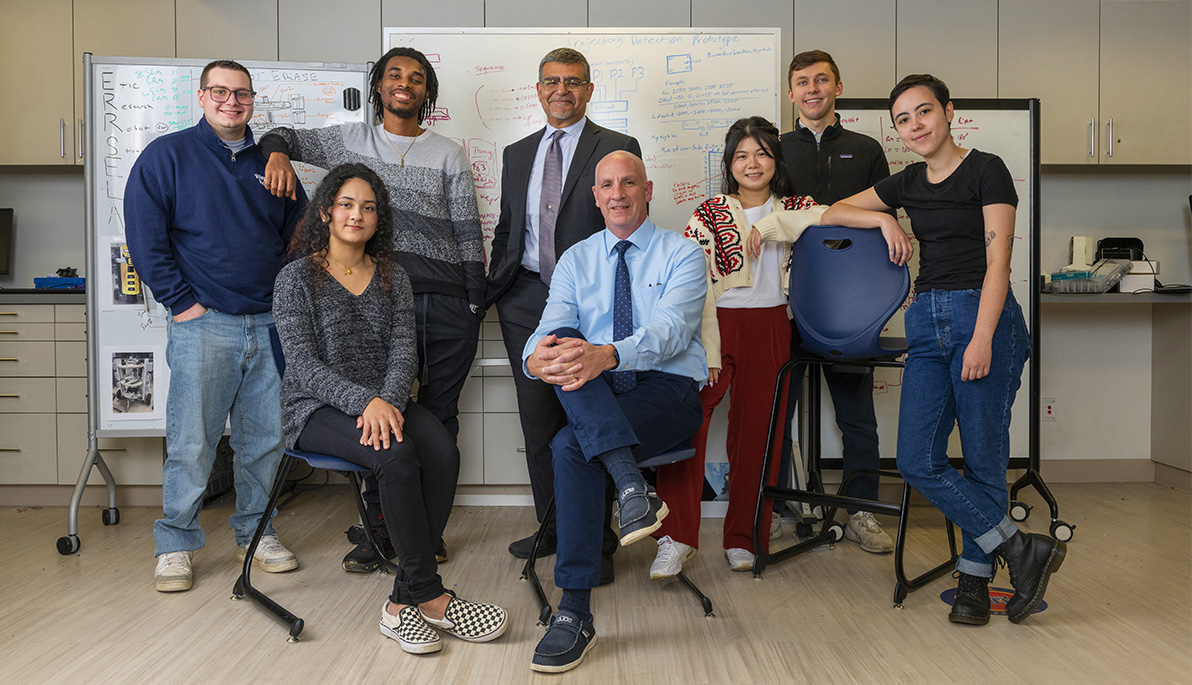 Through the College of Engineering and Computing Sciences’ Entrepreneurship and Technology Innovation Center (ETIC), New York Tech has already demonstrated its capabilities in building early-phase technology prototypes for local and regional startups. Last year’s contract with NASA meant one giant leap for the ETIC: helping NASA move unrealized intellectual property toward commercialization through prototyping and production services. With NASA’s vast footprint on the worldwide economy (they’ve developed everything from wireless headphones to memory foam mattresses, after all), there’s a good chance the New York Tech team will see some of the prototypes it develops being used in various applications in the near future.

As the first year of the contract comes to a close, members of the collaboration agree it was a success. Not only did New York Tech’s student employees reach the goals outlined in the contract, they also anticipated potential needs and developed solutions for them. With expectations exceeded, NASA has extended the contract with New York Tech for another year.

“We are proud that for a second year, NASA considered our innovation capabilities and technical expertise in line with their expectations and renewed their relationship with us to develop commercial prototypes of NASA’s patents,” says Babak D. Beheshti, Ph.D., dean of the College of Engineering and Computing Sciences. “Our students are excited and ready to participate in these projects, and our faculty see this as an excellent opportunity to bring real-world practice into the day-to-day theoretical concepts that our students master.”

During the past year, students have been working on four technological prototypes for NASA:

Of the four prototypes, two have been completed and presented to NASA, and the other two will be finished by the end of 2022.

Under the renewed contract, the New York Tech student team will take on five new projects. “We’re not looking for the easiest, but the most achievable,” explains electrical and computer engineering student Robert Maksimowicz. “We’re going to decide which projects make the most sense for us.”

NASA collaborates with other colleges, but the contract with New York Tech is a special one. “NASA has tried this particular format in the past,” says Michael Nizich, Ph.D., director of the ETIC and adjunct associate professor of computer science. “I think that one of the reasons our contract was reviewed, embraced, and moved to the next level is that it works.”

Samantha Kilgore, technology liaison with NASA Goddard Space Flight Center, agrees. “These students are amazing,” she says. “I walk away from every meeting impressed, and I tell the stakeholders, ‘Make sure you’re sitting down because you are going to be blown away by these projects.’”

Kilgore meets regularly with ETIC students to make sure they are reaching their goals. She found they are and in many cases, they are going beyond the task at hand.

“For example, the team anticipated that a licensing manager might not always be able to demonstrate a product in person. So, they created demo videos, which was a great idea,” Kilgore says.

“The prototypes can be demoed by NASA to potential licensees in physical form but they may use the demo videos we create for them since they can be shown anywhere, in any environment and under any circumstance.” Nizich says.”We created YouTube channel videos for NASA, and we’re building a website for them with videos just for this purpose.”

The multidisciplinary team includes New York Tech students pursuing degrees in computer science, mechanical engineering, and electrical and computer engineering. While this is a team effort, students often work on their areas of expertise. “The need for clear communication on the progress of their work is the foundation to the success of the collaboration,” explains Hibah Agha, a computer science major.

Students gain real-world experience in their particular field. “I’ve learned how to properly implement complex data structures and algorithms in Java,” Agha says. “I know this skill will become invaluable in a professional setting as it broadens my programming capabilities, allowing me to play a larger role in the programming process.”

Students also learn how to collaborate, problem-solve, and develop a prototype from concept to completion. “The students have to deliver a working product and all the tech that goes along with it, all the working pieces,” Nizich says.

While the NASA program takes place primarily on the Long Island campus, opportunities for students at the New York City campus have also developed. In March, New York Tech opened an ETIC location in Manhattan. In doing so, a direct link between the two campuses and the diverse talents of the student bodies was created.

One student on the New York City campus, electrical and computer engineering student Austin Stietzel, came on board the NASA project when a need for a strong mathematician emerged. “I was recommended to Dr. Nizich by Dr. Ranja Roy, the math department chair, with whom I had taken one of my math minor classes last semester,” he says.

Working remotely with the team did not hinder Stietzel’s work. “Due to the recent pandemic, the virtual meetings for the project have become pretty much second nature,” he says. “And I can always take a quick trip to the Long Island campus if needed.”

As work with NASA continues, more opportunities for real-world learning have become available to students in the ETIC. That includes acting as mentors for volunteer students interested in learning about the NASA projects. “One of the requirements for the students [in the NASA program] is that they have to teach and mentor other students,” Nizich says. “They enjoy the teaching component and find value in it.”

The students who volunteer appreciate the opportunity as well. “These are the go-getters,” Nizich says. “They’re building their skill sets. It’s a bit evolutionary.” As the volunteer students shadow the NASA program students, they can eventually move into roles as more senior students graduate. By having a steady stream of motivated and talented individuals, the work for NASA can continue without missing a beat.

“I can tell that the students who shadow us are deeply interested in what we’re doing,” Maksimowicz says. “And if it becomes the case that they’re signed on [to the NASA contract], they won’t be surprised what a normal day looks like.”

A Win-Win for All

The takeaways from the New York Tech–NASA contract continue to evolve, but it is already apparent that this situation is a winner for ETIC, NASA, and the New York Tech students working on the prototypes. “Engineering and information technology-related disciplines, by definition, are experiential,” Beheshti says. “Our graduates go on to the job market to develop products, systems, and services that improve lives and push technological advancements forward. This contract with NASA is a clear illustration of our commitment to the achievement of this primary objective, which is enabling our graduates to be doers, makers, innovators, and inventors.”