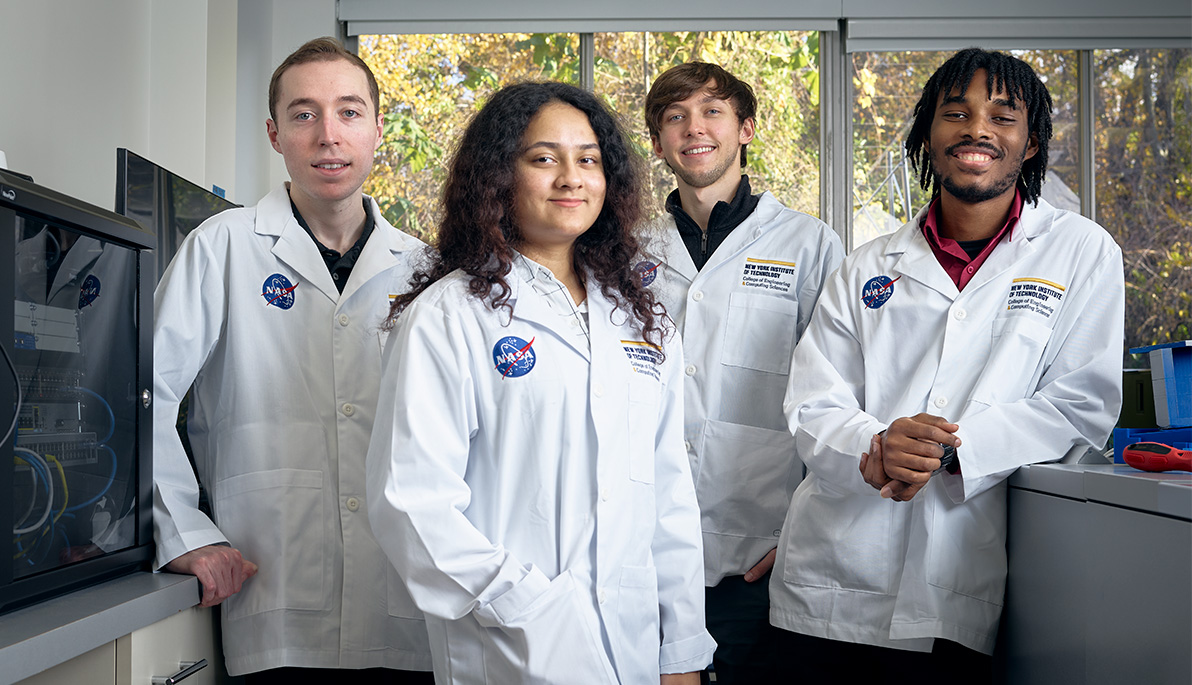 NASA research and discoveries have laid the groundwork for many products that are part of our daily lives, from the computer mouse and ear thermometer to ski boots and CAT scans.

Other products that may one day join that list include a robotic therapy vest for patients with neurological impairments and a high-tech device, known as a C-gauge, to measure cord tension in parachutes, sails, and weather balloons. And an interdisciplinary team of New York Tech students stands to play a role in realizing that goal by building prototypes for these future products.

As part of a new agreement, NASA has contracted with New York Tech, through the College of Engineering and Computing Sciences’ Entrepreneurship and Technology Innovation Center (ETIC), to have ETIC student employees build unique technology prototypes based on existing NASA patents and create professional marketing materials that NASA can use in efforts to commercialize the technology.

“The purpose of this agreement is to provide an operational structure and framework for NASA to move various unrealized and undeveloped intellectual property further towards commercialization through prototyping and production services available at New York Tech’s Entrepreneurship and Technology Innovation Center,” said Kris Romig, the commercialization services lead at the NASA Johnson Space Center in Houston.

Currently, seven New York Tech student employees are working to fulfill the terms of the contract with NASA, which runs through August 2022. Students pursuing computer science, mechanical engineering, and electrical and computer engineering degrees were selected to build the prototypes based on NASA patents, and two digital arts students will develop instructional and marketing videos to help present the products to investors.

“The sky is the limit in terms of potential opportunities for New York Tech students through this relationship,” said ETIC Director Michael Nizich, Ph.D. This first contract includes seven students, but it’s possible that over time, several dozen from across the university could be working toward building or supporting NASA products, in addition to pursuing internships and perhaps a full-time position at NASA after graduation.” 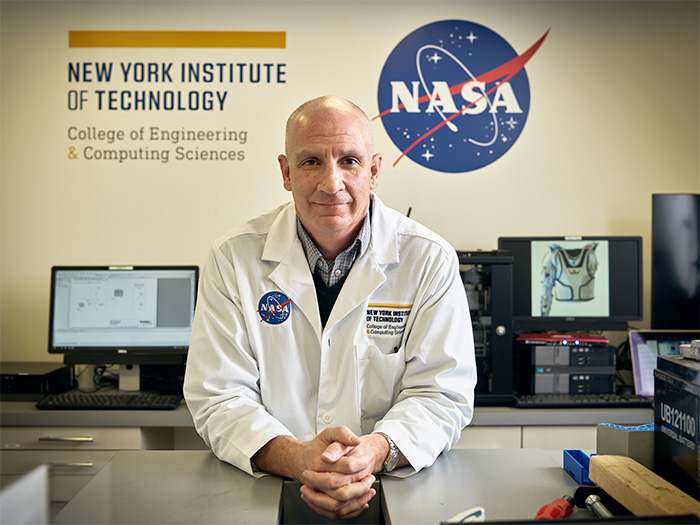 “Importantly, this work is guided by a performance-based contract. It is not a grant and serves as a pilot for New York Tech to demonstrate our rich and talented resources in terms of our labs, facilities, students, and their faculty advisors,” said Babak Beheshti, Ph.D., dean of the College of Engineering and Computing Sciences. For this first project, “we reviewed patents of interest provided by NASA for viability and high probability of success. We based our decisions and selections on our skillsets and facilities, as well as our ability to complete the job. NASA agreed to the patents we selected, so we have developed a plan and statement of work, including work description, estimated hours, deliverables, and timeframe. This truly exemplifies that our students are makers and doers who are well on the way to reinventing the future.”

Undergraduates on the NASA team are Robert Maksimowicz from Bellmore, an electrical and computer engineering major, entrepreneur, and self-described electronics hobbyist; Hibah Agha, a computer science major from Bellerose who is serving as a Python and Java developer for the project; Benjamin Fuoco from Valley Stream, also a computer science major who is focusing on electronic component configuration with Python; and Lincoln Dover, a mechanical engineering student from Wyandanch skilled at robotics who will be the mechanical designer for the vest prototype and hopes to one day work in renewables like solar power. Robert Doxey (B.S. ’21), a computer science graduate student and entrepreneur from Syosset, has already founded a company through the ETIC that develops apps for other ETIC startups. His key focus on the NASA project will be to develop a website to manage or control various aspects of the prototypes as well as to display data reporting the projects’ progress.

“Many of us worked in the ETIC last summer on various product prototypes on behalf of regional startups, which was a great exercise to be sure we were up to the task of working on the NASA team,” said Maksimowicz, who is also serving as student project manager and electrical design engineer for the NASA team.

Nic Luna, from Fresh Meadows, and Ying Shi Zhang, from Brooklyn, digital arts students in the School of Architecture and Design, will help develop instructional videos promoting and demonstrating the prototypes to support commercialization efforts once the prototypes are built.

Under the leadership of Beheshti and Nizich, the ETIC refined its strategy a few years ago to focus on opportunities for engineering and computer science students to build early-phase technology prototypes for local and regional startup companies. In 2019, Nizich was contacted by Empire State Development on behalf of a local (Long Island) startup, Grub Guard, which needed a technology solution built from a patent it was filing. Students working at the ETIC subsequently built the first prototype technology solution for Grub Guard and the software to control it. During Grub Guard’s fundraising efforts for the prototype, its principals met the NASA Technology Transfer Office/Commercialization Services team, who requested to speak to New York Tech after viewing the Grub Guard prototype.

“After being connected with NASA, we worked to explain the ETIC’s programs and services and the College of Engineering and Computing Sciences’ labs and facilities, student capabilities, and engagement,” explained Nizich, who is also an adjunct associate professor of computer science. “NASA ultimately requested a proposal for us to take various unrealized NASA patents that they see can potentially be commercialized and then create early-phase prototypes of those technologies for NASA to demonstrate to their industry partners.”

An Exciting Year at a Glance

The team of students is now busy building the first series of prototypes, according to the NASA patent guidelines. The student team, under Nizich’s guidance, provides periodic updates and reports, including text-based reports, photos, and videos of their work and collaboration.

Beheshti noted that ideally, after the prototypes are built and accepted, a larger number of students will be able to contribute to additional versions of the built prototypes, and perhaps work on new prototypes as well.

“It is entirely possible that, as we are building the prototypes to specification, we’ll create some new technology or component in the process. This kind of unique New York Tech innovation could end up benefitting businesses in the region and providing additional capability to outside companies,” Beheshti said. “It’s very exciting.”

The Box will continue to share information about the NASA team at New York Tech throughout the year.