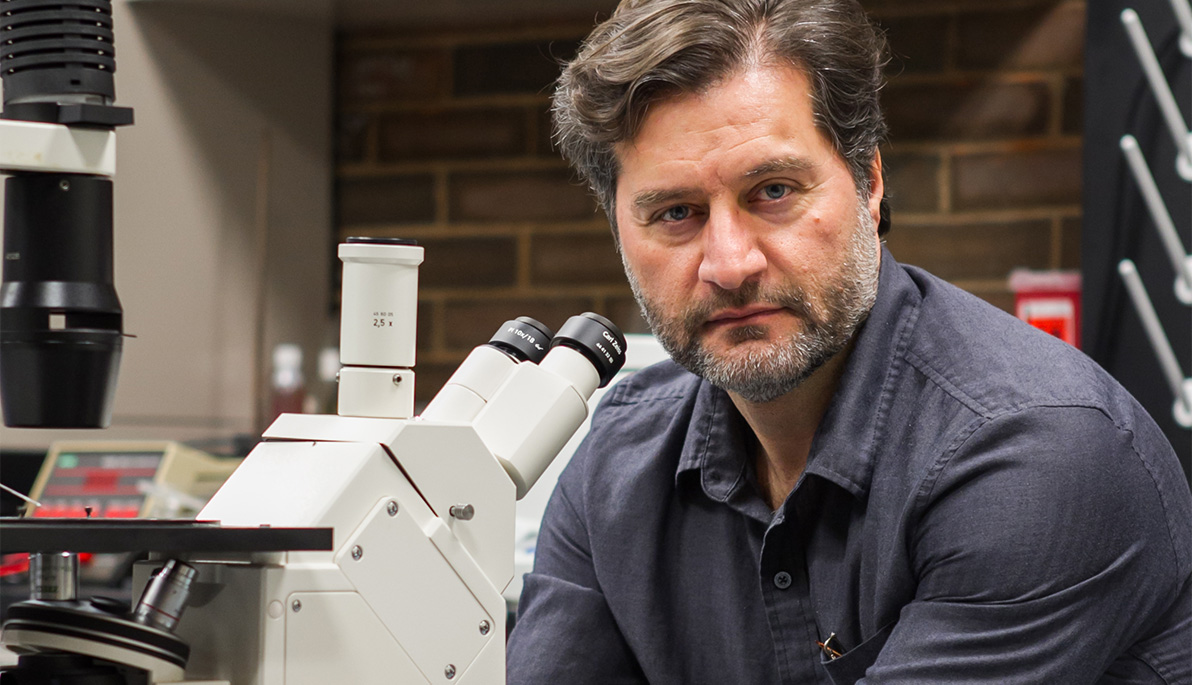 Professor Michael Hadjiargyrou, Ph.D., chair of the Department of Biological and Chemical Sciences and director of the D.O./Ph.D. program, has been named New York Institute of Technology’s first distinguished professor. This designation is found at most top research universities and recognizes outstanding faculty who have achieved the highest levels of scholarship over the course of their careers, earning national- and international-level distinctions and honors of the highest caliber.

“Interim Provost Jerry Balentine, D.O., and I were 100 percent in agreement that Professor Hadjiargyrou should be the first at New York Tech to receive this designation,” notes New York Tech President Hank Foley, Ph.D. “We have some very impressive faculty researchers, and he is absolutely one of the best. He is instilling his passion for research in our students while conducting important work in our labs in a variety of areas.”

Foley pointed to the range of Hadjiargyrou’s work, which includes studying polymeric electrospun nanofibers for cell/gene/drug delivery systems, gene and miRNA (microRNA) expression, stem cells, and the molecular and cellular basis for bone development and regeneration, and the exciting implications his research has for future applications, such as gene delivery and treatment of difficult fractures.

According to his Google Scholar profile, Hadjiargyrou has an h-index (a measure research impact based on the total number of his publications and citations) of 37, one of the highest of any New York Tech researcher and considered to be outstanding in the greater research community. Between 1998 and 2022, his published research has been cited 7,711 times. In addition to his scientific research, Hadjiargyrou has also published thought leadership and opinion pieces on topics ranging from scientific integrity to teaching practices.

“I am humbled by being named distinguished professor, and I will continue to live up to the title,” says Hadjiargyrou. “I would like to deeply thank President Foley and Interim Provost Balentine, not only for bestowing this award, but more importantly, for their continual support of my research activities.”

Hadjiargyrou, who joined New York Tech in 2012, has been responsible for reinvigorating the Department of Biological and Chemical Sciences, including enriching the curriculum and support for research activities; hiring talented, engaged faculty researchers; and establishing the D.O./Ph.D. program in medical and biological sciences. During his tenure, he has worked to expand the number of undergraduate research opportunities, which has become the hallmark of a New York Tech education.

“The creation of a distinguished professorship at New York Tech supports our goals of becoming a [Carnegie-classified] Research 2 university within the next seven years,” says Foley, pointing to the university’s other investments in research activities, including adding new instrumentation and resources, new graduate programs, and hiring new research faculty.

Every two to three years, the distinguished professorship role and criteria will be reviewed by the president and provost, and new candidates will be considered for the designation.