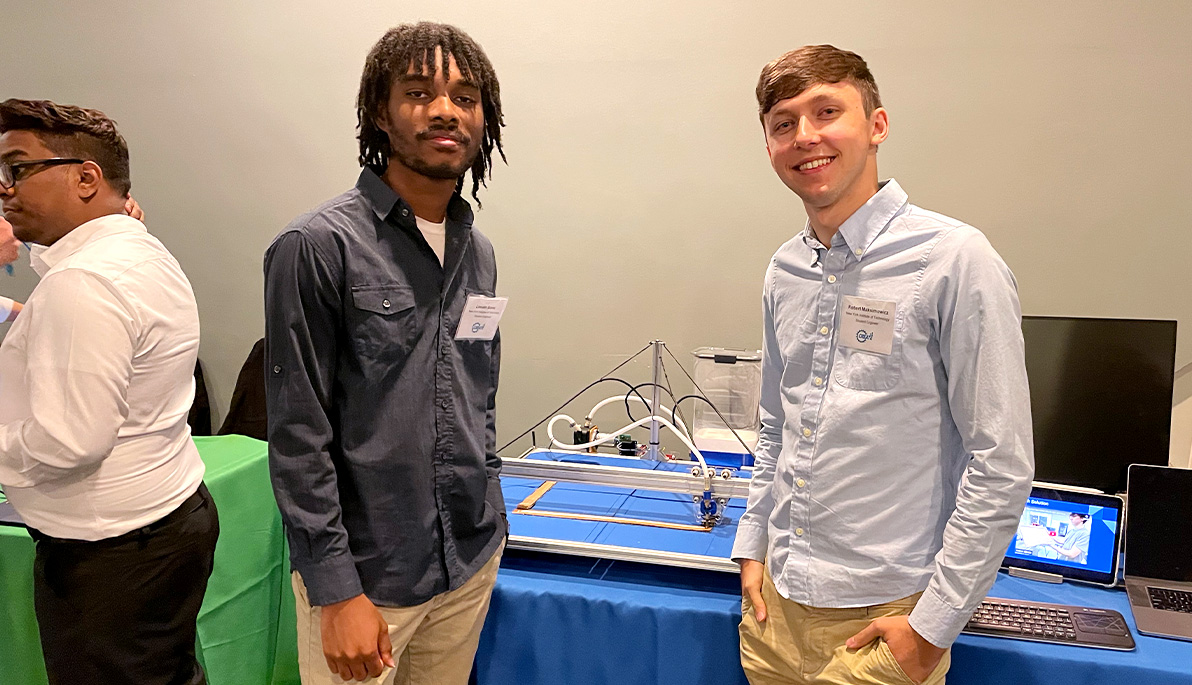 For their entry in the NYSID CREATE Symposium (New York State Industries for the Disabled Creativity, Research, Engagement, and the Arts Transform Everyone), College of Engineering and Computing Sciences students Lincoln Dover and Robert Maksimowicz and recent graduate Robert Doxey (B.S. ’21, M.S. ’22) developed a way to standardize the process of cutting and gluing cardboard shipping materials to assist employees who are neurodiverse.

The symposium allows students to collaborate with an NYSID not-for-profit rehabilitation center that employs workers with disabilities and present an invention that will help workers and boost productivity in the workplace.

The students worked with AHRC Nassau, an organization that provides services for persons with developmental disabilities, including pre-vocational, employment training, and supported employment. The organization secures contracts with external vendors to assemble cardboard shipping materials, which AHRC employees put together. However, only a select handful of employees are qualified to perform the job due to its potentially hazardous nature, which may lead to cuts and burns from using the tools and glue guns. The deficiencies in the assembly process limit the number of cardboard contracts that AHRC can commit to, as well as the number of AHRC workers that could be employed by those contracts.

The New York Tech team’s technology creates a safe and productive environment to maximize the output of cardboard shipping materials, allowing AHRC Nassau to train more individuals with disabilities to produce them. The device will cut/trim the cardboard inserts, lay a bead of hot glue around a preset boundary, lay a series of glue points when a bead is not necessary, and audibly instruct the employee on the next step. The device also includes safety features, such as detecting when an employee’s hands are in the device, alert managers to productivity issues, or when an employee requires assistance.

Their innovation placed them fourth in the competition, the highest ranking from New York Tech to date.

The trio is used to collaborating. They are part of a team of student employees in the Entrepreneurship and Technology Innovation Center (ETIC), building prototypes based on existing NASA patents and create professional marketing materials that NASA can use in efforts to commercialize the technology.

“The importance of the NYSID CREATE program cannot be underestimated as it provides New York State engineering students with a path and venue to apply their newly acquired skill sets to address real-world problems and improve the lives of persons with disabilities,” said Michael Nizich, Ph.D., director of the ETIC and team advisor. “To watch students grow, both as engineers and as human beings, over the years has been some of the most rewarding times for me as an educator.”

Added Dean Babak D. Beheshti, Ph.D.: “Our students’ success in the recent NYSID CREATE competition is in line with the College of Engineering and Computing Sciences’ motto ‘Engineering for Society: Innovating for a Better World.’ It is through these initiatives that our students demonstrate their commitment to applying their skills as doers, makers, and inventors to contribute to their community. We are proud of our student team and their accomplishments under Dr. Nizich’s mentorship.”

Learn more about the project.