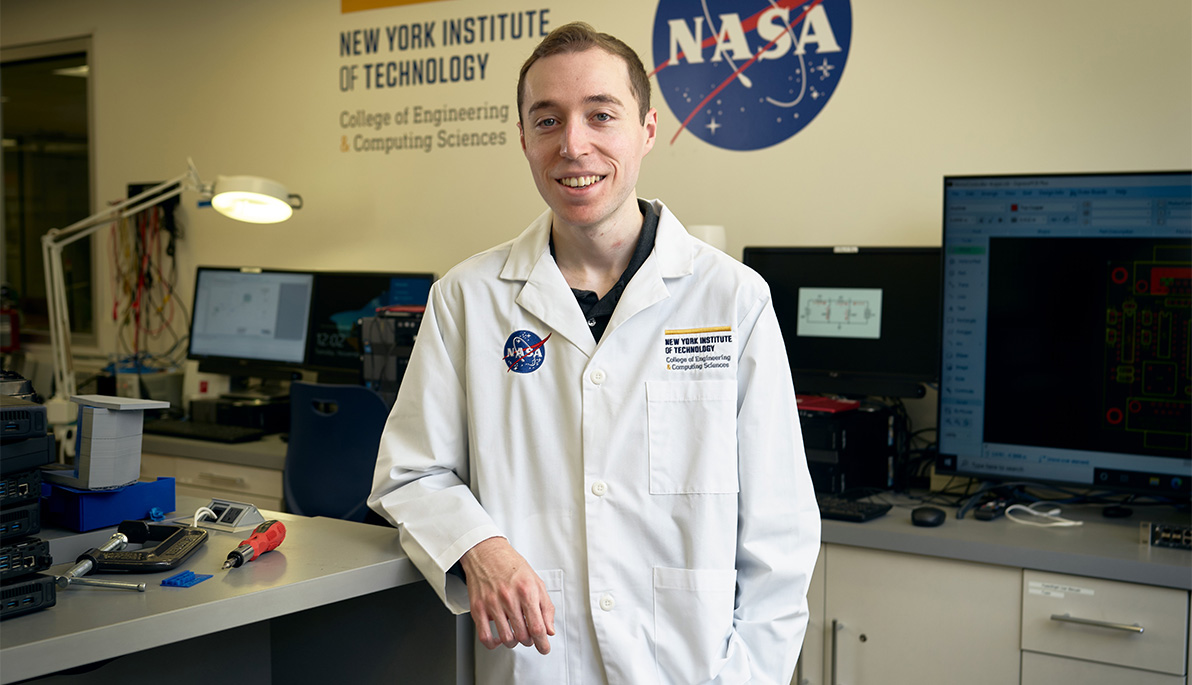 Since elementary school, Robert Doxey (B.S. ’21), a graduate student studying computer science, has been interested in how computers work. As he got older, he also became involved with gaming, and then his interest extended to modifying the code in games. An entrepreneur who also earned his undergraduate degree in computer science at New York Tech, Doxey recently spoke with The Box about what inspires him, as well as his challenges and successes as a student and his plans after graduation.

Why did you choose this field of study?
In ninth grade, I released a modification for a well-known game (GTA V) that removed the water from the game, allowing players to drive where the ocean would usually be. It has received more than 7,000 downloads since its release. One year later (in 2015, when I was 16 years old), I built a computer for the first time, which was a big turning point for me. I also started teaching people in my neighborhood how to use their computers and smartphones as well as upgraded some of their computers. Word spread, and I started getting lots of clients. I even started building computers for clients! In my senior year of high school, I taught myself how to program, which was something I struggled with for years to understand. I then released my first iPhone app three months after I learned how to program. I had never taken a single programming class in my life. Due to all of this, and especially my growing passion for developing apps, I knew that computer science was the perfect major for me.

Can you talk about some of your other accomplishments outside of school?
I released five more apps between 2017 and 2019. Before its release, my latest personal app was dismissed by many, including a marketing specialist. The app is called “Time to Money,” and it calculates how much you are making on a job in real-time and how much the client owes you when the job is done. There is also an Apple Watch version that works alongside the iPhone version of the app. I was thrilled that it was on the top charts for paid finance apps when it released and reached #15 in less than 24 hours. With zero marketing, people are still buying this app today. Once COVID-19 hit, I decided to take a break from app development and instead mapped out apps and other computer-related ideas to develop after I graduate.

Between 2018 and 2021, I developed three private apps for clients that are governed by non-disclosure agreements (NDAs). In 2020, I launched a business (DevTeam_One) to develop mobile apps for tech incubators and startups in need of an app, but I had issues finding clients. Then, this past summer, I released an appointment-booking app for my favorite barber, Gold Coast Barbers, which was rated 2021’s best barbershop on Long Island. Creating this app sparked an idea. What if I created apps for small local businesses just like this barber? After I graduate in May, I’m going to reach out to other local businesses and explain to them how having a mobile app is great for business.

How is New York Tech preparing you for the future?
New York Tech, and especially the Entrepreneurship and Technology Innovation Center (ETIC), is giving me real-world projects to develop. Many of my classes involve completing a major project, and projects that I developed with teams were always based around real-world software. For example, for my senior design project, I lead a team of three others in developing a competitor to Canvas and Blackboard. We called it “Indigo.” Our goal was to make a college class management tool without any issues, is easy to navigate, and has a fresh, modern design. We accomplished all of our goals by the end of the semester, and the final result was amazing. I lead the team for three other major projects as well, in which we exceeded expectations every time. Between 2018 and 2021, I developed prototype apps for startup companies at the ETIC (under NDA). But I’ll say this: they definitely gave me excellent experience that will help me when developing apps for clients through my business after I graduate.

Wow! You’ve been keeping busy. Are you working on any other projects?
Currently, I work at the ETIC as a software developer. I am developing a software system for Spectrum Design that makes it easier for employees to clock in and out as well as submit comments to their supervisor(s).

I am also a software developer in the NASA project. My key focus is to develop a website to manage or control various aspects of different NASA prototypes as well as to display to NASA any data involving the projects’ progress. All of this real-world experience will come in handy after I graduate and start my business or work for a company. Without New York Tech and the ETIC, I simply would not have the amount of software development experience that I have today.

What do you love about New York Tech?
The ETIC is what I love the most. Without it, I would have never thought of starting a mobile app development business nor have had the chance to work with real clients. The ETIC allows you to turn what you love doing within computer science, or any type of engineering, into something big. Also, I love New York Tech’s campus, the staff, and the amazing security. I really feel like I’m right at home. I also love that New York Tech offered a 4+1 program that allows me to earn my master’s degree in computer science in just one additional year.

What advice do you have for incoming students?
One thing I would tell my freshman self is that college will get easier simply due to the fact that you will become better at college-level work and staying organized as time goes on.

You should take breaks, but your priority should be your classwork. Staying organized will help with this. I highly recommend using a reminders app or calendar app to keep track of upcoming exams and due dates for assignments.

Although I was lucky enough to know what major I wanted to pursue years before college began, try to find what you love doing, and try to find a major that fits into that. You will be much more successful and happier.

It’s also important to make friends that are as hard working as you so that you can work with them on class projects. I guarantee that if you already know the people in your project group, communication will be much better between you and your group members.

This interview has been condensed and edited.