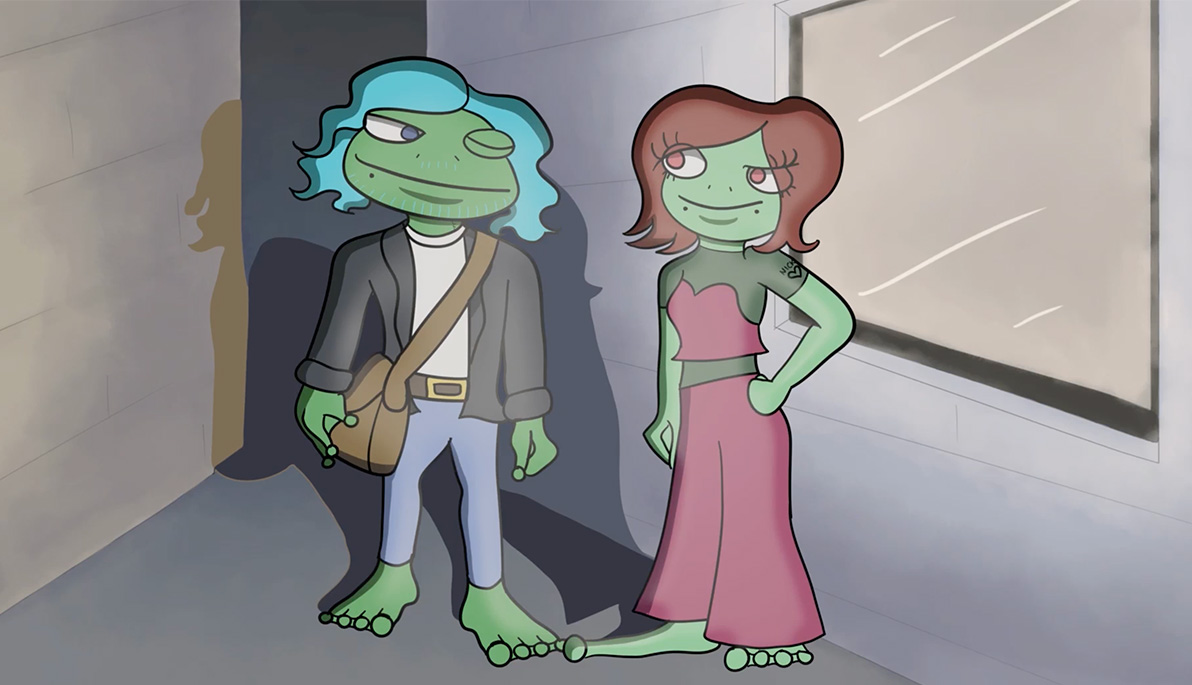 Two fugitive frogs distract a pair of duck police officers with donuts, two thieves wait it out in a warehouse for further instructions from their boss, and the life of a man from conception to death.

These are just some of the winning films at New York Tech’s Animation and Film Festival 2021. Students, faculty, and judges met via Zoom on May 21 to view screenings of animations, motion graphic pieces, films, and documentary shorts created by students in the digital art and design and communication arts programs. Submissions were judged by industry guests from the animation and film industry, including independent film and music video director Lee Milby; editor for Sesame Workshop John Peter Didato; independent animator and visual effects artist Mark Reynolds; and independent writer and director Andamion Murataj.

At the end of the screenings, seven winners were announced in two categories: Digital Arts and Design – Animation and Communication Arts – Film.

Eighteen students entered the animation category and there were 12 project submissions in the film category. “Creating animations is a long process. Some of these works are done within a semester, and others have taken longer, maybe one year or two, especially thesis students,” said Anila Jaho, visiting assistant professor of digital art and design and one of the organizers of the festival.

The students created 2-D animations using software such as Adobe After Effects, Adobe Animate, and Toon Boom. “It was amazing to see the wide array of styles and techniques that underline the dedication we give to encouraging individualism and personal expression in art, in addition to learning the software,” said Jaho.

New this year was the Career and Technical Education High School category. “The communication arts department has been working with Corrine Doron from the New York City Board of Education for a number of years to promote communication arts open houses to students at Career and Technical Education (CTE) high schools,” said Paul Demonte, M.A., adjunct instructor of communication arts and co-organizer of the festival. “We thought this would be a great way to further exhibit our department to CTE students.” Twenty-six students submitted short films, and there were three winters: Griffin Lapham took first place for Life, the second-place winner was Jason Mendoza for Over & Over, and in third place was Dania Brissett for It’s Sad.

“I feel students who submitted projects for the festival should give themselves a huge pat on the back,” said Demonte. “Working on a project this Spring semester meant having to self-motivate, take classes and work from home, and encourage other classmates to do the same. It’s encouraging to see students overcome such incredible obstacles at this time in our history.”