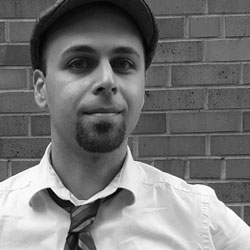 Born and raised in New York, Paul Demonte is an editor at heart and cameraperson by second nature. With a strong storytelling sense that composite the styles of documentary, promotional, and short film, he believes a good story is key to captivating an audience and that editing is essential to grasping one's emotions.

The majority of Demonte's work is based in New York, where he is a freelancer and has worked for companies such as Sony, E.C. Professional Video, Emblem Health, Brightpoint Health, The Waterfront Barge Museum, The North River Historic Ship Society, The Dinner Party and RealScout. Demonte's production company, The Dog Ate It Productions, has also created content for film festivals in New York including "Tug & Barge: A New York Harbor Love Story" for The Maritime Film Festival and "A New York Theater Story" for the Workers' Unite Film Festival.

Demonte has also had the opportunity to collaborate with sculptor and artist Vera Manzi-Schacht. Their short film, "The Stars Came Out in Pienza", was screened at the American Academy in Rome, Italy as well as in Fiesole, Italy and Siracusa, Italy. It is based on Manzi-Schacht's magic realist novel, inspired by her medieval historical research.

In addition to teaching class, Demonte co-directs the annual Animation and Film Festival with fellow professor Ashley Gerst, where students from the CA and DoDaD departments screen their final projects on the silver screen at NYIT Auditorium on Broadway.