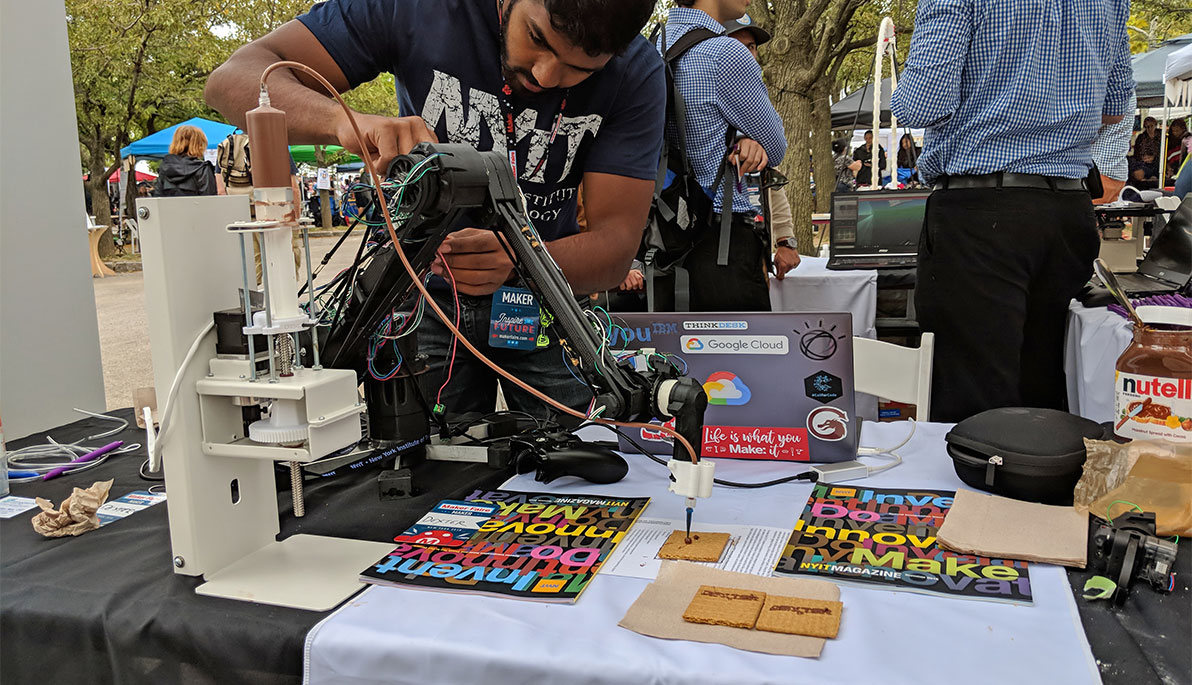 They came; they saw; they created.

NYIT joined DIY enthusiasts, scientists, designers, inventors, engineers, and tech fans across the tri-state area September 22 and 23 for the 9th Annual World Maker Faire at the New York Hall of Science in Queens.

Faculty and students were on hand to showcase their latest research in the fields of robotics and virtual reality. One of the key attractions of NYIT’s booth was its Dexter Robotic Arm, which was built by students and faculty members using kits purchased from Haddington Dynamics. Many of these devices can also be found within NYIT College of Osteopathic Medicine (NYITCOM) labs, as well as the Innovation Labs located at the New York City (Manhattan) and Long Island (Old Westbury, N.Y.) campuses.

Joining them at the booth were two representatives from Haddington Dynamics as well as high school students who co-founded Teen Hacks LI, an organization that promotes hackathons at Long Island high schools. The high school students later joined Christian Pongratz, M.Arch., interim dean of NYIT School of Interdisciplinary Studies and Education and NYIT students on September 29 and 30 at one of their hackathons held at Syosset High School, where contestants were eligible to win an NYIT scholarship and access to the NYIT Innovation Labs to develop their own prototype designs. 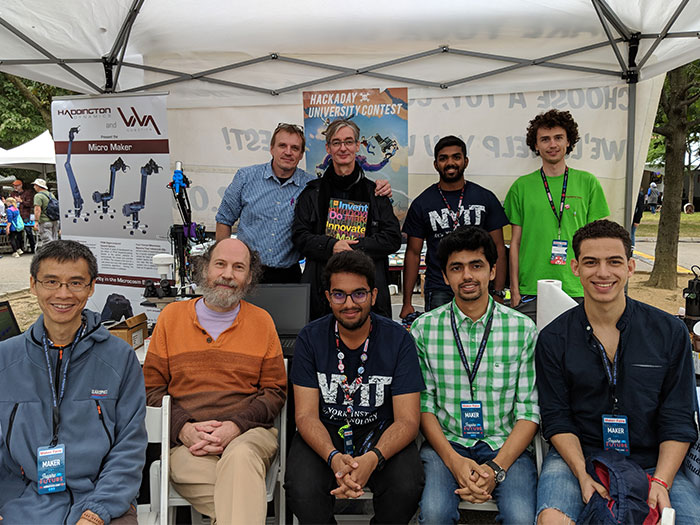 Stout and his colleagues also explained to Maker Faire attendees how NYIT faculty and students bring anatomical specimens from the real world into virtual space using the technique called photogrammetry (i.e., the science of making measurements from photographs). “Using all these digital tools together, we are able to create a VR learning laboratory,” Stout adds. One such virtual environment to study nephrology (the kidney) is headed by Assistant Professor Aleksandr Vasilyev and NYITCOM students Dylan Carmichael and Ivan Bandovic.

The opportunity to describe their technology and research projects to the general public proved to be an invaluable professional exercise for NYIT students.

“The Maker Faire allowed me to polish my demonstration skills for a wider audience," says Vignesh Harish, an information, network, and computer security graduate student who, with his classmate Adhithya Krishnaswamy, demonstrated to onlookers how Dexter’s precision motions could “handwrite” names using a pen attached to its robotic arm as well as spread Nutella on crackers (a big hit for children visiting NYIT’s booth).

“The opportunity to participate in advanced technological research for technical and creative development prepares students to be at the forefront of future industries,” says Associate Professor of Digital Art and Design Robert Smith in NYIT College of Arts and Sciences.

Some students were in awe of the event’s maker-doer vibe and innovations on display.

“I was blown away by the magnitude of stuff at the Maker Faire,” says mechanical engineering undergraduate Michael Morgan. “It was really exciting to see what other startup companies and schools were doing in the field of technology.”

For Pongratz, who organized the Maker Faire outing along with faculty and students from the School of Interdisciplinary Studies and Education, the event was the perfect opportunity for the NYIT community to flex their maker-doer muscles. “This is the place to be for makers from any background, gender, age, race, or nationality,” he says. “Here, you see people engaged in different kinds of creative works with no barriers.”