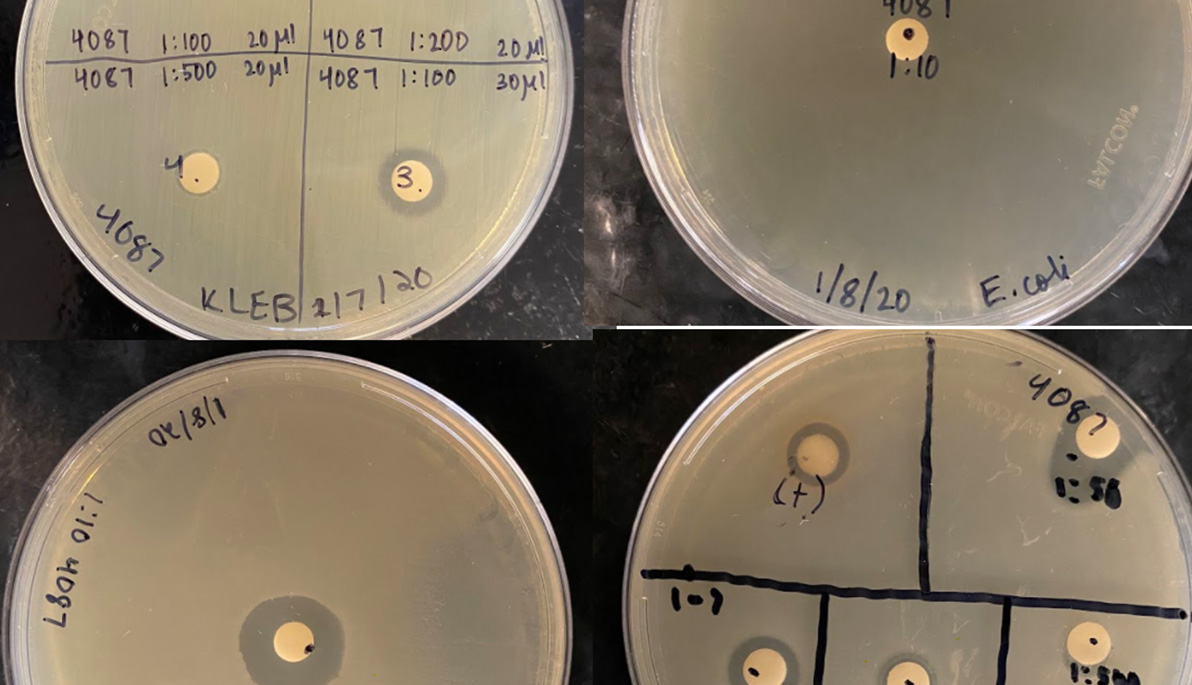 Pictured: A Kirby-Bauer disk-diffusion assay was performed to examine the antibacterial effects of various concentrations of the compound 3- (methylthio) propyl isothiocyanate on K. pneumoniae and E. coli bacteria.

Kaitlyn Accardi, a biology major with a concentration in molecular biology and a minor in medical humanities, virtually presented a cancer treatment research project at the National Conference of Undergraduate Research.

As a New York Tech undergraduate, Accardi has worked alongside Niharika Nath, Ph.D., professor of biological and chemical sciences, on various research projects related to the detection of cervical cancer, one of the world’s most common cancers. At this latest conference, she shared their project, “Antibacterial Effects of Organosulfur Compounds That Have Anti-cancer Potential.”

The project discussed the potential of cancer-fighting compounds that contain sulfur, specifically organic compounds known as organosulfur compounds (OSCs). OSCs are widely present in the human body and found in the natural environment in plants and food such as garlic, Brussels sprouts, and cauliflower, as well as other vegetables. Studies have shown that these compounds have a wide range of biological effects, including detoxifying carcinogens (cancer-causing agents), helping to prevent cancer cells from reproducing, and antimicrobial effects, among others. Some research also suggests that those who consume a diet rich in organosulfur are less susceptible to different cancers.

Given their antimicrobial properties, OSCs are particularly attractive as a cancer treatment because infections pose an increased risk to these patients. Accardi’s project analyzed 13 different OSCs for their antimicrobial abilities. Specifically, she examined OSCs that have the potential to release hydrogen sulfide, a gas that is produced during the breakdown of organic materials in the absence of oxygen to determine whether this byproduct promotes an antimicrobial environment.

“Of the 13 compounds we tested, we found that one named 3- (methylthio) propyl isothiocyanate was effective in reducing levels of the bacteria E. coli and K. pneumoniae. While we did not observe a direct antimicrobial effect from the hydrogen sulfide release itself, we do recommend future OSC screening for antimicrobial properties, as there continues to be much cancer-fighting potential in these naturally occurring compounds.”

Since 1987, the National Conference on Undergraduate Research promotes undergraduate research, scholarship, and creative activity in all fields of study. Each conference hosts 3,500 to 4,000 students from across the globe, presenting their research through posters, oral presentations, visual arts, and performances.