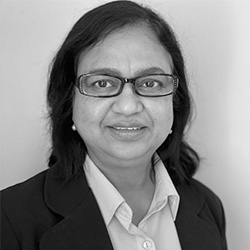 Niharika Nath specializes in research on cancer biology and prevention. She focuses on the regulation of signaling molecules relevant to cellular processes such as cell proliferation and cell death in cancer cells of the breast, colon, and pancreas. Nath investigates the anti-cancer potential of drugs such as nonsteroidal anti-inflammatory drug (NSAID) derivatives that are synthesized to release the small gaseous signaling molecules nitric oxide and hydrogen sulfide. Collaborative works with the City College of New York using mouse models have demonstrated tumor reduction by these compounds.

Nath teaches cell biology and microbiology, and her students participate in her research projects and present at professional conferences. She promotes undergraduate research and scholarship at the university level and advocates for undergraduate research at the national level through her role as Councilor at the Council on Undergraduate Research (CUR), Washington, D.C. She is the health sciences divisional editor of the CUR Quarterly.

She received a Ph. D. in biochemical engineering and biotechnology from the Indian Institute of Technology-Delhi, where she studied plasmid DNA biology; a master’s degree in biotechnology from Jadavpur University; and a bachelor’s degree in pharmacy from Delhi University, India. Her postdoctoral research at Columbia University focused on carcinogenesis and the interplay of signaling pathways and cell cycle regulatory proteins in mammalian cells.