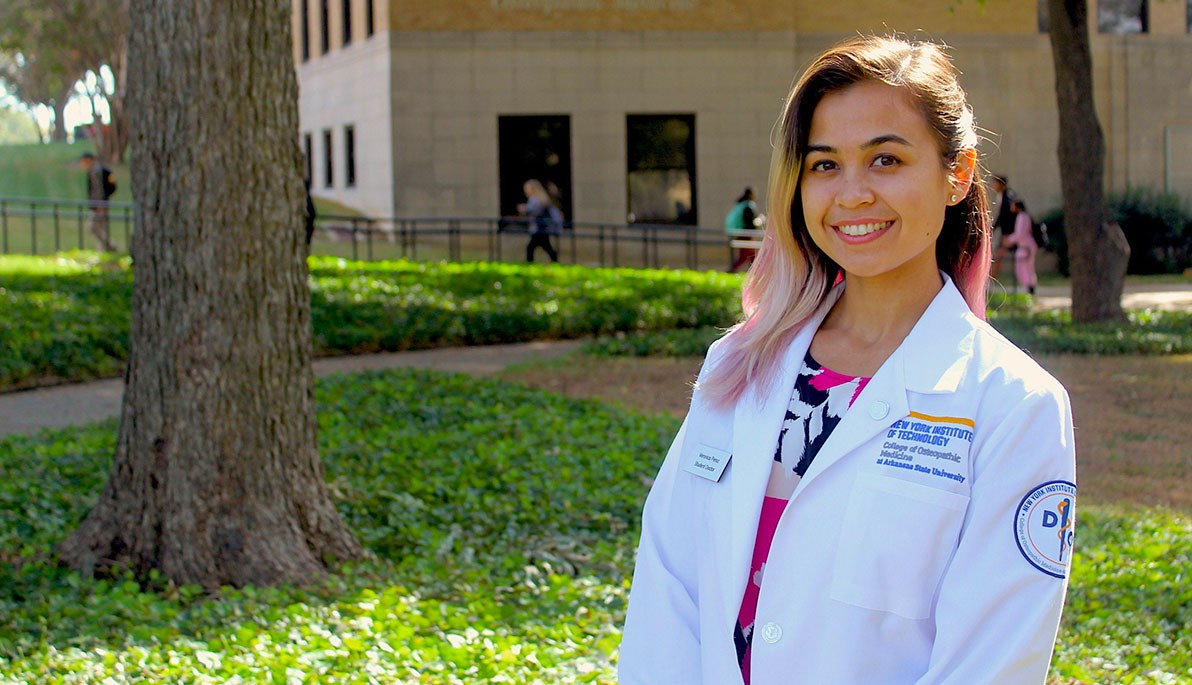 Born and raised in Guam, a Pacific island territory of the United States, Veronica Perez, a first-year student at the College of Osteopathic Medicine’s Jonesboro, Ark., location (NYITCOM-Arkansas), recently experienced what she described as a surreal moment—receiving her white coat.

“[Receiving my white coat] was the moment where I am starting the career that I’ve been wanting for so long, and what I want to do—to help the people of Guam,” Perez told the regional outlet Pacific Daily News (PDN).

As a child, “playing doctor” wasn’t just fun and games for the Ordot, Guam, native. Being a doctor was always Perez’s life goal. Characterizing herself as a “STEM nerd,” Perez details how, while growing up, classes like biology, chemistry, and anatomy were the ones that especially held her interest, and she always wanted to work extra hard in them. But it wasn’t until her late grandmother fell—again—that Perez was met with 100 percent certainty the medical field was her calling.

“She couldn’t walk. She rarely moved anything,” Perez told PDN. “This was one of the things that sparked interest in me—figuring out what was wrong with her, why these things happen to people, why people get sick, and what will help them get better.”

Perez began doing her own web research and watching medical videos she could find online. She then came to the United States for her higher education and received her bachelor’s degree in biological sciences from the University of Notre Dame.

Now, Perez is a full-fledged medical student working toward her Doctor of Osteopathic Medicine (D.O.) degree—something she doesn’t take for granted, as she says not many people from her home island are physicians.

Much like the Mississippi Delta region, where NYITCOM-Arkansas is located, Guam is also experiencing a physician shortage. The experience she gains from working with patients in Arkansas will allow Perez to be part of the solution in Guam when she returns home after her June 2026 graduation.

“NYITCOM-Arkansas emphasizes working in rural and underserved communities, especially with the Delta Population Health Institute. Guam may be thousands of miles away, but we face very similar healthcare problems,” says Perez. “I believe NYITCOM-Arkansas will equip me with the knowledge and skills I need to help my community.”

After COVID-19 precautions sent her back to Guam during the last year of her undergraduate studies, Perez had the opportunity to get her feet wet in the healthcare field. Rather than be despaired about the year lost, the eager student volunteered at Guam Memorial Hospital Authority (GMHA), the island’s only public hospital, in data collection and analysis, where she helped with clinical research and documentation. Through this, Perez was able to track and document strokes and cardiac arrests throughout the hospital to report the effectiveness of treatment and care.

As the pandemic progressed, GMHA welcomed a vaccination clinic. This gave Perez another chance to expand her medical experience as she performed contact tracing and swabbing. She was promoted to telemedicine technician, where she performed physical exams on patients and served as the intermediary between hospital staff and the telemedicine physicians. Perez started this critical work in GMHA’s intensive care unit, and then moved to the emergency room, where she admitted patients to the hospital overnight—all while studying for the Medical College Admission Test (MCAT).

After shadowing Jerone Landstrom, M.D., a surgeon at Guam Surgicenter, Perez now has an interest in orthopedic surgery. Although she says there is still much for her to experience before she can make any concrete decisions, Perez believes she may want to concentrate on manipulating the body’s muscle tissue and bones to relieve pain, a hands-on process unique to D.O.s, known as osteopathic manipulative treatment (OMT). But after all is said and done, Perez plans to return home and practice in Guam.

“Guam is home because my family, friends, and culture are there,” Perez told PDN. “Even though we’re a little island, it’s home for me, and I just want to help out in any way and help build and stabilize our community to make our island a better place.”

To keep her spirits high while completing her vigorous coursework, Perez indulges in hobbies, including hot yoga sessions and weightlifting at the gym. But when she really needs to find a moment of zen, she’ll break out her guitar or bust a move.

“We had a cultural night at NYITCOM-Arkansas in November. I sang a Chamorro song [Chamorro refers to the indigenous people of the Mariana Islands] while playing guitar, and then I did a hula dance,” says Perez. “It means a lot to me that I can keep up with some of my cultural practices while so far away from home.”