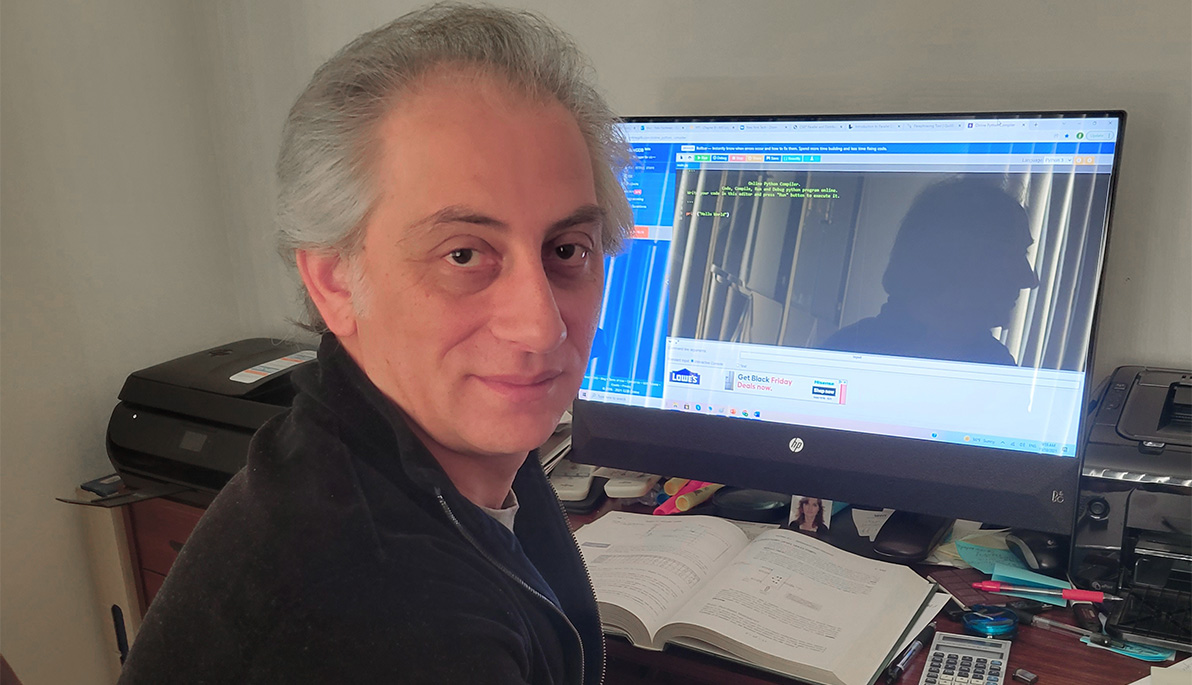 Felix Fischman (B.T. ’95, M.S. ’98, M.S. ’05) is passionate about object-oriented programming (OOP). A veteran of private industry as well as university teaching, he wants his students to understand the foundations of OOP so that they can learn to program efficiently.

“A lot has been written about how programming languages were created in terms of functionality,” he says, “but there is no explanation on how the languages were originated.” Fischman emphasizes OOP languages’ origins in nature to give students “a deeper understanding of how to program in any language.”

He also is an instructor in the newly launched Python Programming for Women and Single Parents workshop at New York Tech, which provides in-demand coding skills in the popular Python programming language along with dedicated career services and support. This innovative workshop is tailored to women, single parents, and caregivers impacted by the market downturn who may currently be unemployed or underemployed.

Why did you join New York Tech?
I am a graduate of New York Institute of Technology. This is where I earned my bachelor’s degree in electrical engineering technology (’95), a master’s in electrical engineering (’98), and another M.S. in computer science (’05). I also have almost 25 years of experience teaching and working for various companies (Systra Inc., HRA, UL Inc., and others).

I was given a chance to teach various electrical engineering and computer science courses here as an adjunct professor. I like teaching future New York Tech graduates. Later on, I became a full faculty member. Currently I am in my final stages of obtaining my Ph.D. in computer science from Hagen University in Germany.

How are you able to tie what you are teaching in the classroom to the wider field of computer science?
One of the most important aspects of my teaching is to deliver my programming courses to demonstrate that all object-oriented programming (OOP) languages descend from one knowledge pool. Students should understand that the logic and the structure of any OOP language is the same as any other, because they all come from one knowledge source, and that is nature. Molecular biology is the original OOP language.

Once programmers understand the OOP philosophy, they can transition into any OOP language in the most effective and efficient way.

What are some career options for graduates in computer science?
Computer science grads have a great future because computing is the most flexible discipline you can study. With a computer science or data science degree, you can work in the financial district, the medical field, government facilities, the military, etc. The opportunity for a recent graduate to find employment is big.

Seeing my students succeed in industry is the biggest reward for me as a faculty member. Graduates I have taught are now working for Goldman Sachs, JP Morgan, and many other companies.

Tell us about an occasion that had an impact on your research, your teaching, or both.
Perhaps one of the best moments of my career was when Frederick Seitz, the inventor of solid-state physics, signed my manuscript. It was in 2005, when Seitz and renowned science advisor and philanthropist William T. Golden wer guests of honor at a celebration of Albert Einstein’s 126th birthday. (They both had worked with Einstein.)

At intermission, I approached Seitz and Golden with a short manuscript and asked them to give their opinions on my research. To my surprise, both of them looked at it and decided to sign the first two pages. That was an amazing feeling!

Both men suggested I continue my research, which I did. The manuscript grew from 14 pages to about 300 pages. I have since applied this work with great success in my New York Tech courses, such as “Signals and Systems.”

Who is your personal hero, and why?
During my undergraduate years, I had the honor of studying under Dr. M. Chris Wernicki, a brilliant professor of electrical engineering who specializes in lasers and photonics. He also worked for NASA and the U.S. Navy on classified complex projects. As a faculty member, I admire his amazing ability to convey knowledge to students.

It was Dr. Wernicki who taught me applied complex analysis in the course on Random Variables and Stochastic Processes (which I now teach). My subsequent research into that field was what was signed by the two scientists.