After nearly 40 years of advancing the field of osteopathic medicine and blazing trails for women and minorities, Barbara Ross-Lee, D.O., is retiring as vice president for Health Sciences and Medical Affairs at New York Institute of Technology (NYIT), an institution she served for 16 years in multiple leadership roles. A longtime advocate for advancing medical treatment in underserved communities and an expert in national healthcare policy, Ross-Lee has inspired thousands of medical students to pursue careers in osteopathic medicine. 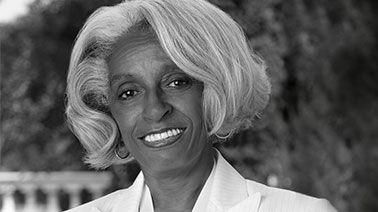 “With her vision to see beyond borders and create opportunities in underserved areas, Barbara Ross-Lee successfully led the charge to open a second campus of New York Institute of Technology College of Osteopathic Medicine, in Arkansas,” said NYIT Interim President Rahmat Shoureshi, Ph.D. NYITCOM’s primary campus is in Long Island. “These efforts embody our mission to give all qualified students access to opportunity, and the entire NYIT community thanks her for these contributions.”

“Now that the inaugural class of NYITCOM at Arkansas State has nearly completed its first year of medical school, the time is right for me to pursue new paths and the various opportunities they may present,” said Ross-Lee. “Although I am retiring from NYIT, I remain committed to supporting the causes of osteopathic medicine and helping to extend its benefits to communities in need.”

The oldest of six children, Ross-Lee, who grew up in Detroit, became interested in medicine at the age of 10 when her mother was hospitalized for tuberculosis. This experience, as well as near-death complications from a tonsillectomy at age 16, inspired her dreams of becoming a physician. Upon entering Detroit’s Wayne State University in 1960, she majored in biology and chemistry in preparation for medical school, until her academic counselor dissuaded her from a career as a physician in favor of teaching.

After earning a Bachelor of Science degree in 1965, Ross-Lee joined the National Teacher's Corps, a government program that allowed her to teach in the Detroit public school system while earning her master's degree. She went on to receive her D.O. degree from Michigan State University’s College of Osteopathic Medicine in 1973. Ross-Lee began her own private medical practice, serving low-income communities and families, in Detroit.

Ross-Lee participated with the U.S. Department of Health and Human Services in 1984 as a health professions consultant on education in hopes of catalyzing change in the health care system. In 1990, she became the first D.O. to receive a health policy fellowship from the Robert Wood Johnson Foundation. Three years later, she set another precedent as the first African-American woman to be appointed dean of an American medical school, at the College of Osteopathic Medicine of Ohio University, a position she held until joining NYIT in 2001 as Vice President for Health Sciences and Medical Affairs, responsible for all health and medical-related programs.

At two different times while serving as vice president, Ross-Lee also served as dean of both NYIT School of Allied Health and Life Sciences (now the School of Health Professions) and NYIT College of Osteopathic Medicine. During her tenure, Ross-Lee built NYITCOM into one of the largest and most respected medical schools in the U.S. Building upon that success, Ross-Lee spearheaded the establishment of NYITCOM at Arkansas State University in 2016, with an inaugural class of 115 students.

“Not only has Dr. Ross-Lee brought years of clinical, academic and leadership experience to our university, she has also shown that progress is made when we, as individuals, strive beyond our limitations,” said Jerry Balentine, D.O., FACEP, NYIT vice president for Medical Affairs and Global Health. “Pushing the boundaries of possibility, Dr. Ross-Lee overcame barriers during a time when African-American women physicians were not common. She is a true pioneer in the field of medicine and leaves NYIT with a legacy of achievement that we will continue to honor and celebrate for years to come.”

Ross-Lee also has served as an advisor on primary care, medical education, minority health, women's health and rural healthcare issues on the federal and state levels. In 2012, she was appointed by the Institute of Medicine, the health arm of the National Academy of Sciences, to join 18 other prominent medical professionals and scholars on its Consensus Committee on the Governance and Financing of Graduate Medical Education (GME). She was the only osteopathic physician on this national committee, which recommended reforms to the GME system. The same year, she was appointed to chair the board of directors for the Institute for the Advancement of Multicultural & Minority Medicine, which focuses on eliminating health disparities in multicultural communities. She is also a member of the Executive Committee of the National Osteopathic Medical Association (NOMA).

“Barbara Ross-Lee remains the perfect example of a trailblazer, role model, and mentor within the osteopathic profession and the U.S. healthcare system. She cracked and broke the glass ceiling, time and again, including becoming the first African-American woman to serve as the dean of a medical school, while continually channeling talented young and diverse physicians into healthcare leadership pipelines. We are indebted to her for her visionary leadership, dedication to training of students and residents, and her proud promotion of the distinctive philosophies of osteopathic medicine,” said Adrienne White-Faines, CEO of the American Osteopathic Association (AOA).

Among her proudest accomplishments impacting her profession, Ross-Lee cites the AOA’s Health Policy Fellowship program, launched in 1993, and the Training in Policy Studies (TIPS) program, which began in 2002. The Health Policy Fellowship program, which she founded and directs, prepares mid-career osteopathic physicians and others connected to the profession for leadership roles in health policy; she also founded TIPS, a similar program for medical residents. Ross-Lee has received several honorary degrees and numerous national awards including:

New York Institute of Technology (NYIT) offers 90 degree programs, including undergraduate, graduate, and professional degrees, in more than 50 fields of study, including osteopathic medicine and health professions, as well as architecture and design; arts and sciences; education; engineering and computing sciences; and management. In 40 years, NYITCOM has graduated more than 7,000 doctors.

A non-profit independent, private institution of higher education, NYIT has 10,000 students attending campuses on Long Island and Manhattan, online and at its global campuses.To date,100,000 graduates have received degrees from NYIT.