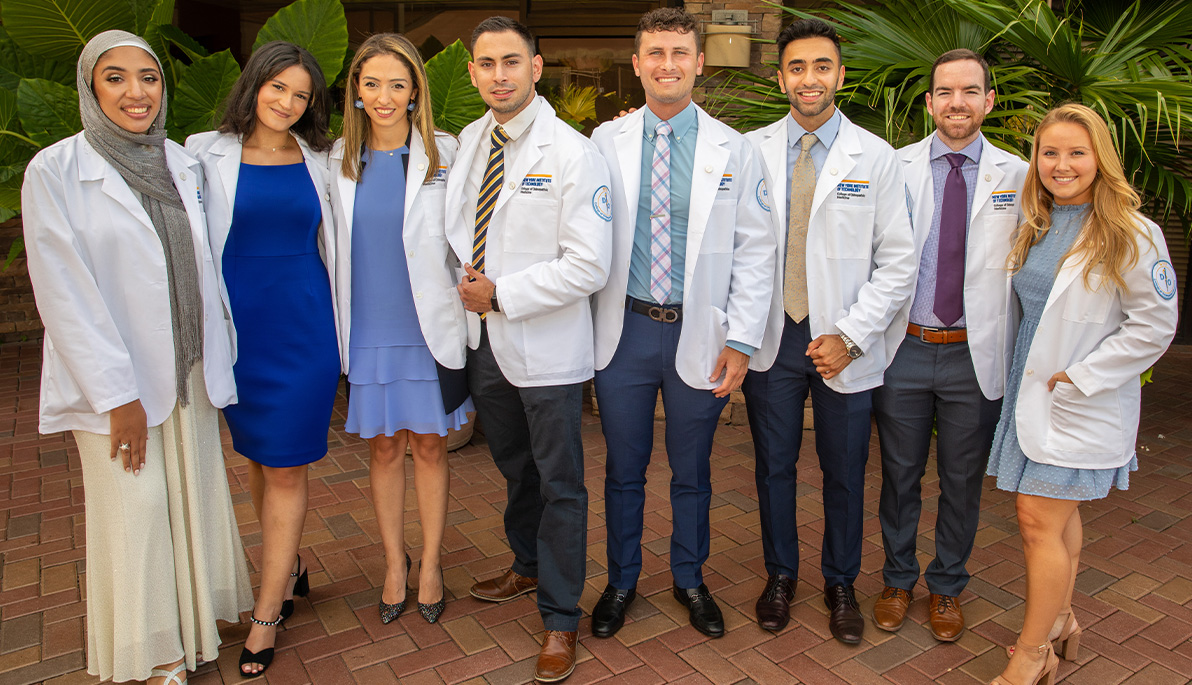 Pictured: Newly coated members of the Class of 2026 at the White Coat Ceremony in Long Island, N.Y.

The annual White Coat Ceremonies mark the beginning of NYITCOM students’ medical school journey. In receiving their coats, the incoming class prepared to fill the shoes of the Class of 2022, which had a combined match rate of 99.5 percent; graduates earned impressive residencies at institutions such as The Cleveland Clinic, Duke University, and Emory University, among many others.

Here’s how NYITCOM’s Class of 2026 began its medical school journey.

“Once you put on this white coat and you recite the oath, you’ll be representing one of the noblest professions, and with it, patients give us the power to make decisions regarding their health,” said Wong. “Always remember that it is a privilege to treat patients.”

Several physicians and NYITCOM graduates, known as legacy coaters, coated their family members. Among them was Julia Greco, of Whitestone, N.Y., who was coated by her older sister Lisa Greco (D.O. ’21), a former Academic Medicine Scholar and current second-year anesthesiology resident at the University of Massachusetts–Baystate Medical Center in Springfield, Mass. 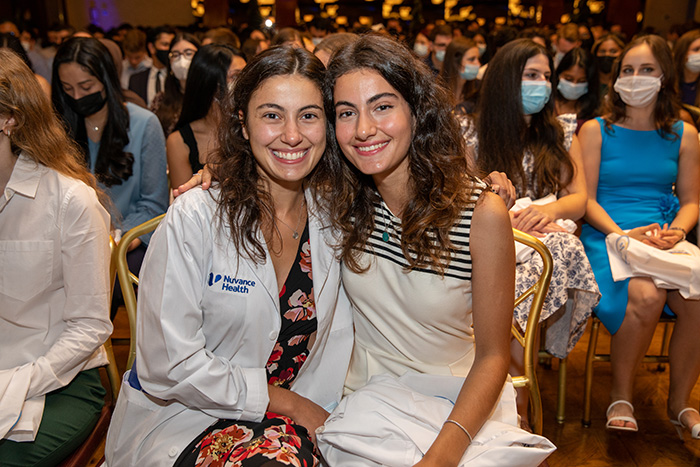 “Ever since we were little, Lisa and I loved cooking with our grandmother, especially when preparing for the holidays. Altogether, we were the greatest team, as my sister was my nonna’s assistant chef and I was Lisa’s sous chef,” said Julia. “Our close friendship with our nonna extended outside of culinary activities. As she became older, she developed Type 2 diabetes and needed help regulating her diet, measuring her glucose levels, and being taken to the doctor. By attending numerous doctor appointments, I saw firsthand the care and concern that physicians provided to my nonna. I realized that becoming a physician is the best career for me to answer my calling to help others.”

“In a time like no other, the need for talented physicians is great, especially in this region of the nation,” Speights said. “It is for that reason that New York Tech’s College of Osteopathic Medicine has stepped forward to address that need. We’re proud to welcome the next group of talented future physicians.” 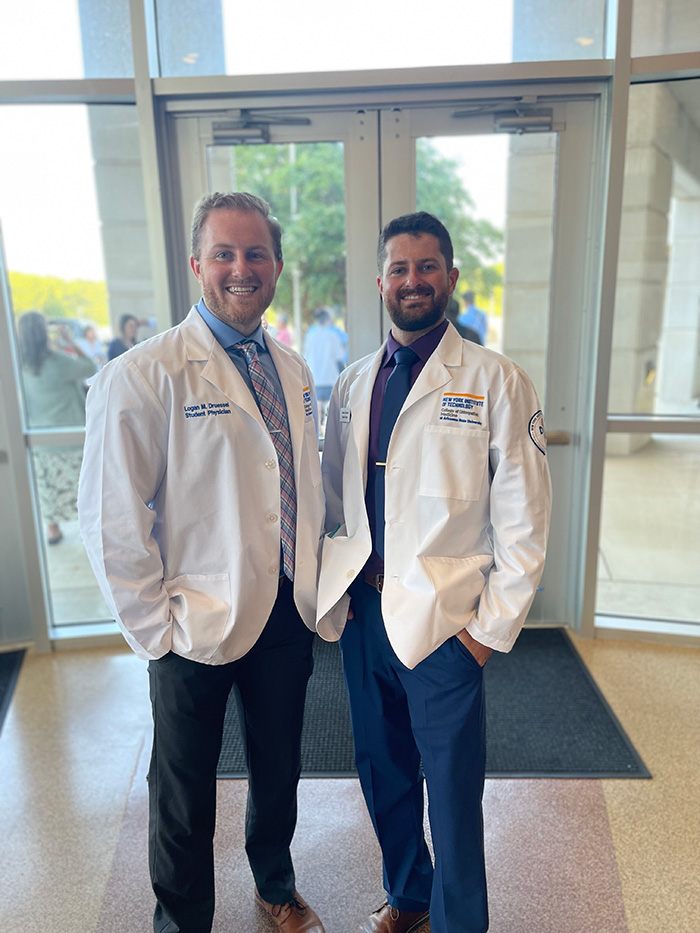 Gannon Druessel, right, is following in his brother Logan’s footsteps, becoming the second person in his family to attend NYITCOM-Arkansas.

Among those who received their white coat was Gannon Druessel, who was humbled by the experience.

“Tonight means the start of a new path to becoming a physician,” Druessel said. “I’ll be honest, I was nervous right before the ceremony, but after getting the white coat on, it’s actually set in that I’m becoming a doctor. I’m on my way, and that’s really exciting.”

Druessel is the second member of his family to attend NYITCOM-Arkansas. His brother Logan Druessel is a third-year student at the school, and Logan’s positive experience was key in Gannon’s decision to follow his brother’s path.

“I looked at a lot of D.O. schools and with NYITCOM-Arkansas being close to my home and with the great experience my brother has had, it was just a great fit for me,” Gannon Druessel said. “He’s told me how great the faculty is and how hard the professors work to give you a good education and make sure you’re in good hands to become a great doctor.” 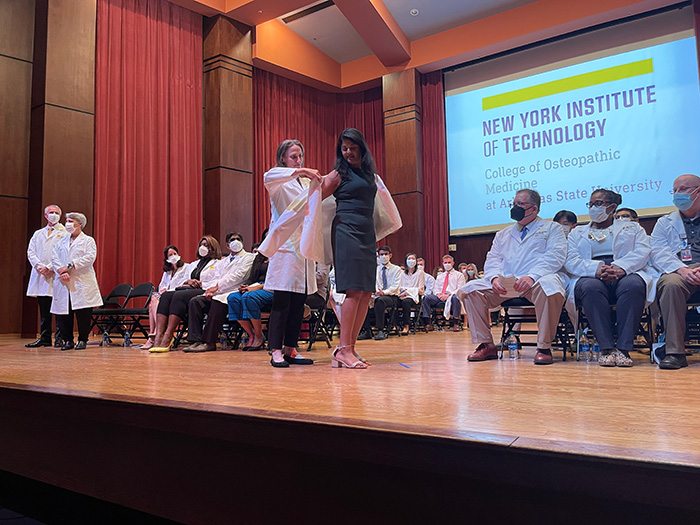 Amanda Deel, D.O., associate dean of academic affairs, coating Student Doctor Stuti Chatterjee, a native of Bryant, Ark., who earned her undergraduate degree at the University of Arkansas-Little Rock before her acceptance to NYITCOM-Arkansas.

Prior to the late 1800s, many physicians wore black, as the practice of medicine was considered a very serious matter. In fact, seeking medical advice was often viewed as a precursor to death. However, at the beginning of the 20th century, as medicine came to be viewed as a more scientific profession, the “pureness” of science was soon reflected in the white coats worn by physicians, many of whom sought to distinguish themselves from those who did not practice evidence-based medicine. Since that time, the coat has come to symbolize cleanliness, trust, and healing and serves as a reminder for physicians to embody the empathy and service they have pledged to their patients. 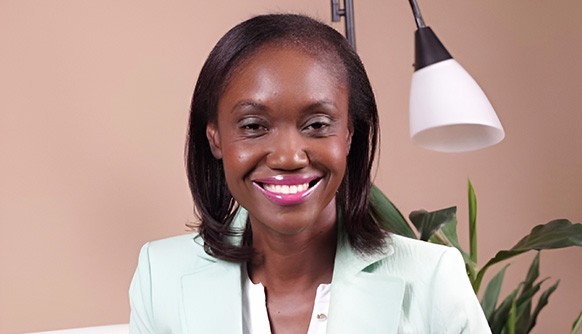