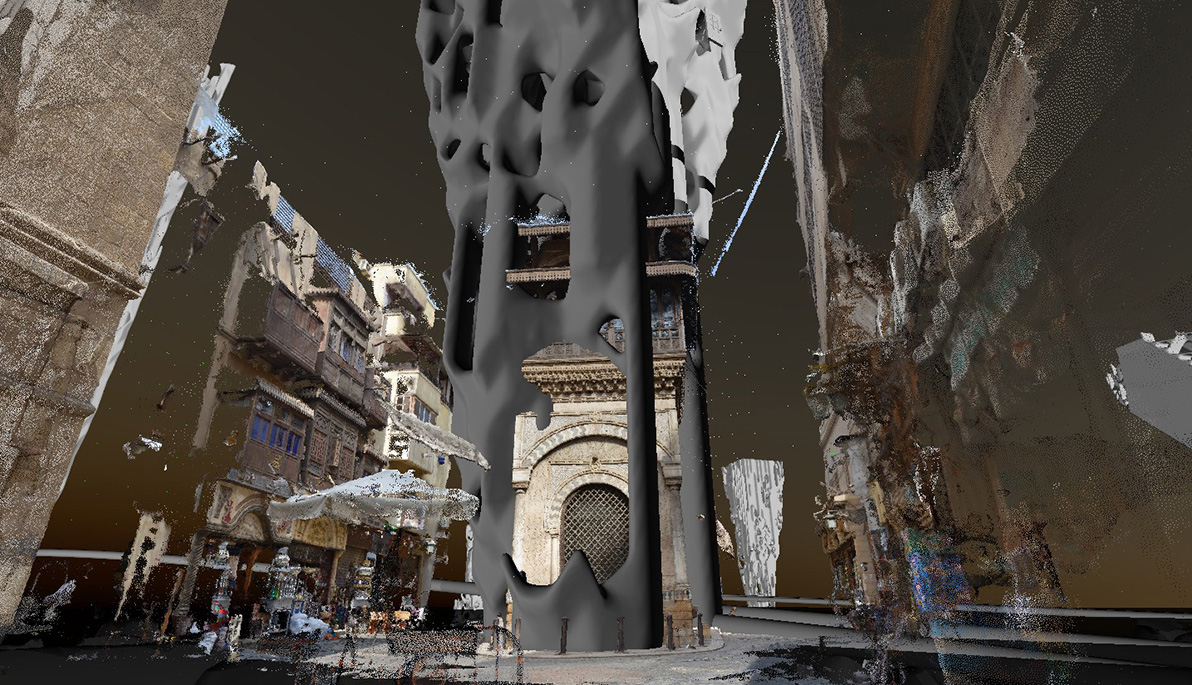 “Architecture is invention,” the Brazilian architect Oscar Niemeyer once said. Today, students in New York Tech’s M.S. in Architecture, Computational Technologies (M.S.ACT) degree program are inventing new ways to look at architecture. It’s all happening through artificial intelligence (AI) and robotic systems and being applied in exciting ways that could impact architecture and, more broadly, environmental systems for the next several decades.

“We are teaching students to look at the future but generate applications for today,” explains Pablo Lorenzo-Eiroa, M.Arch. II, director of the program. Through AI, machine learning, and computational technologies, his students are embracing the best of architecture’s principles and innovate them for the future.

Take the “Museum of Babel” project involving the Guggenheim Museum and the Metropolitan Museum of Art (the Met) in New York City. Salma Kattass, a Fulbright Scholar in the M.S.ACT program, developed a 3-D scanning survey of the museum to activate an informed realism. In other words, the 3-D scanning acts as a kind of X-ray, making it possible to see all layers of the spiral-shaped Guggenheim at once. With its conical shape, the Guggenheim has possibilities of infinite growth. To show this, Kattass superimposed collections from the Met within the space of the Guggenheim using AI and API (application programming interface).

“The Met is a collection that contains all human culture in a single location. The idea then was to include all the Met archived collections retrieved through API and 3-d scanning within the infinite typology of The Guggenheim and develop a ‘Babel Museum,’ since the Met itself contains the same contradiction of human cultures and languages as the Babel Tower,” said Lorenzo-Eiroa about the project.

The “Museum of Babel” project reflects how the latest technology can be used in tandem with, and not as a replacement for, the fundamentals of architecture, according to Kattass, a graduate of the National School of Architecture in Rabat, Morocco. “I believe that if architects and designers embrace machine learning and AI…as an optimizing creative force, it will reveal opportunities for design that were formerly inconceivable,” she says. “AI, machine learning, and automating technologies help optimize an informed design process, analyzing and interpreting huge amounts of data and perfecting simulation and prediction models, therefore expanding and improving our design capabilities.” 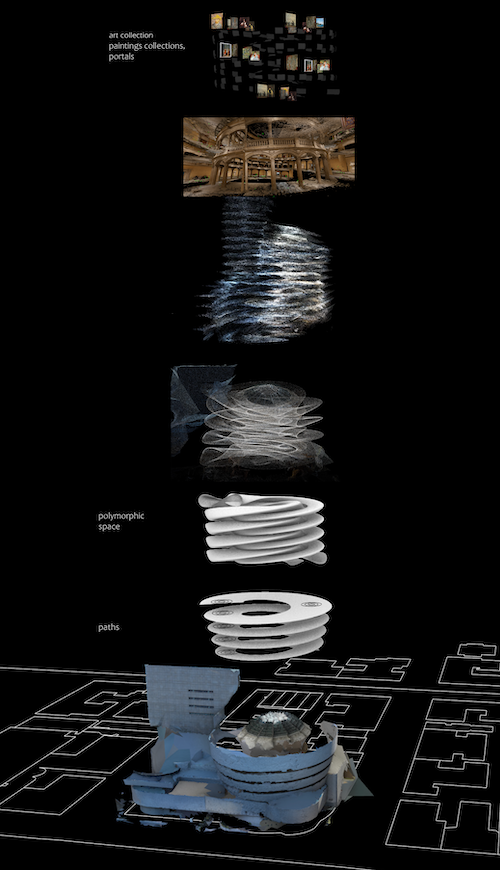 For her project, graduate student Salma Kattass developed a 3-D scanning survey of the Guggenheim Museum to activate an informed realism by superimposing collections from the Metropolitan Museum of Art within the space of the Guggenheim. With its conical shape, the Guggenheim has possibilities of infinite growth. Credit: “Museum of Babel,” Student: Salma Kattass, ARCH 701B Studio Prof. Pablo Lorenzo-Eiroa, MS ACT, New York Tech

Even as these modern scientific tools aim toward future achievements, they have the potential to make historic architectural environments a part of contemporary ecosystems. Yousef Ismail, a student from Alexandria, Egypt, who secured a $5,000 FRIENDS of the School of Architecture and Design Scholarship and a $5,000 IDC Research Assistantship for the Spring 2022 semester, is working on a library system and application based on the Islamic connection between sharing water and knowledge.

In ancient Cairo, sabils (charitable water dispensary towers and public schools/libraries) “combined the two most rewarding deeds of Islam: providing water and education to the impecunious,” explains Ismail, who holds a bachelor’s degree in architecture and environmental design from the Arab Academy for Science and Technology in Alexandria. His research of sabils led him to a 2018 discovery of underground crypts that extend under Cairo, creating a city under the city. This gave Ismail an idea of how to expand the city’s library system.

For his project, “The Growth Heaven Revising the Historical Sabils of Cairo,” Ismail is using 3-D scanning, various simulations, and algorithms based on ancient sabils to create a virtual library with unlimited growth capabilities for endless reading spaces.

Students in the M.S.ACT program see their projects and the resulting outcomes as amazing knowledge that will help them to expand their career as architects. “I’m really interested in the computational research and design field in architecture,” says Ismail. He believes what he is learning in the classroom will help him land a job with a prestigious firm. Ultimately, he would like to start his own firm in Egypt.

For Kattass, the rewards of the program are many. “I chose the School of Architecture and Design’s M.S.ACT [program] as part of my Fulbright exchange program because of the cross disciplinary and inter-exchanging mediums and experimentations that characterize the program,” she says. “The discourse on representation, technology, and design within the program had already helped initiate my journey of researching and discovering unknown territories and new possibilities for the future of architecture and design.”

The new M.S.ACT program at New York Tech promises to bring new insights and possibilities into architecture and its role in communities. “How will we be doing architecture in 30 to 100 years?” Lorenzo-Eiroa muses. “We need to think about how humanity is going to create living environments.”