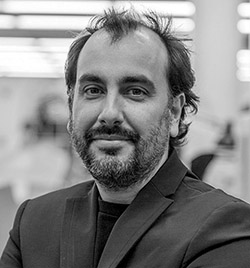 Dr. Pablo Lorenzo-Eiroa is an associate professor with Tenure and director of the Master of Science in Architecture, Computational Technologies program in the NYIT School of Architecture and Design, and is an international architect and scholar in the fields of architecture, urbanism, ecology, and computation. His work innovates in information-based representation and construction systems through materials, robotics and digital fabrication.

He received his Doctor in Architecture degree from UIC Barcelona and his architecture degree from the University of Buenos Aires, where he completed studies for his second master's degree and a post-graduate seminar at the Superior School of Fine Arts de la Carcova. He then won the Fulbright and the National Endowment for the Arts Scholarship to complete his M.Arch II at Princeton University. Professionally, Lorenzo-Eiroa is the design principal of the experimental practice e-Architects (New York/Buenos Aires) based on an emerging Architecture and Urbanism of Information. e-Architects develops software, information “mapping” and “visualizations” implementing Big Data, including machines to “draw” and machines to “build”, understanding them as proto-architectural. His built work includes parks, buildings and installations in Buenos Aires, New York and Europe.

Previously, Lorenzo-Eiroa was an associate professor adj. at The School of Architecture of Cooper Union, where he was the head professor and coordinator of the Advanced Master Program Studio (Fall semester 2014, 2015, 2017) and the Design II Studio (Fall semester 2010-2013). He was also the director of an innovative digital representation and fabrication certificate combining faculty and students from different disciplines (CE). Pablo Lorenzo-Eiroa has also been appointed Visiting Associate Professor at UPenn, Columbia University, UIC Barcelona, Sapienza University in Rome, Universidad Torcuato Di Tella, and the University of Buenos Aires.