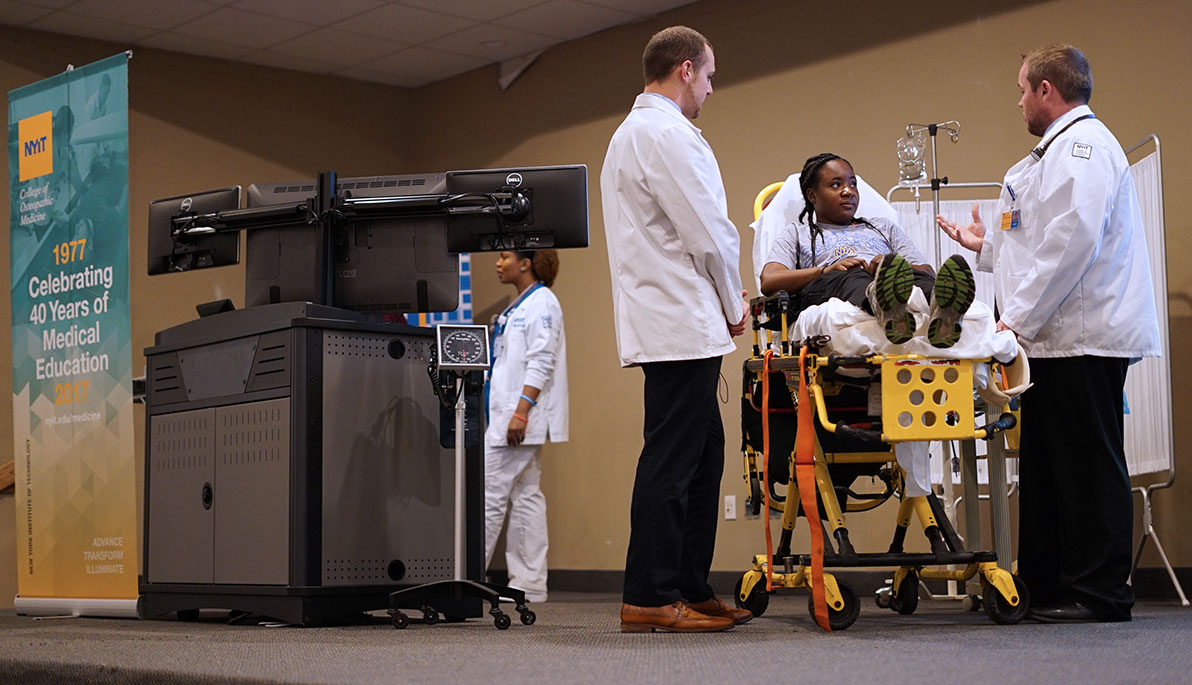 It’s a scenario that plays out every day: A student-athlete suffers a concussion during practice. After weeks of tests and therapy, she seems to be on the road to recovery. Then, some symptoms return. She wants to return to her sport, but when will she be allowed to—if at all? And how will that decision be made?

Students debated this topic at Consequences of the Unseen, an Interprofessional Education Collaborative (IPEC) Case Simulation held on November 17. Representing every discipline within the School of Health Professions and NYIT College of Osteopathic Medicine, students acted out the roles of the student-athlete patient, nurse, physician, physical therapist, occupational therapist, and physician assistant. Together, they evaluated and came to a decision about the hypothetical patient’s case.

“The purpose of IPEC is to use knowledge of one’s role and the roles of other health professionals to appropriately assess and address the healthcare needs of patients,” said Assistant Professor Lorraine Mongiello, who co-chaired the event with Assistant Professor Melanie Austin-McCain. “It is designed to help students learn to communicate with patients, families, communities, and professionals in health care and other fields in a responsive and responsible manner,” she added. “It supports a team approach to the promotion and maintenance of health and the prevention and treatment of disease.”

Now in its fourth year, the case simulation was presented by the health professions and osteopathic medicine schools. “This year we were very pleased students from all our undergraduate, graduate, medical, and online programs, as well as the athletic department participated,” said Mongiello. 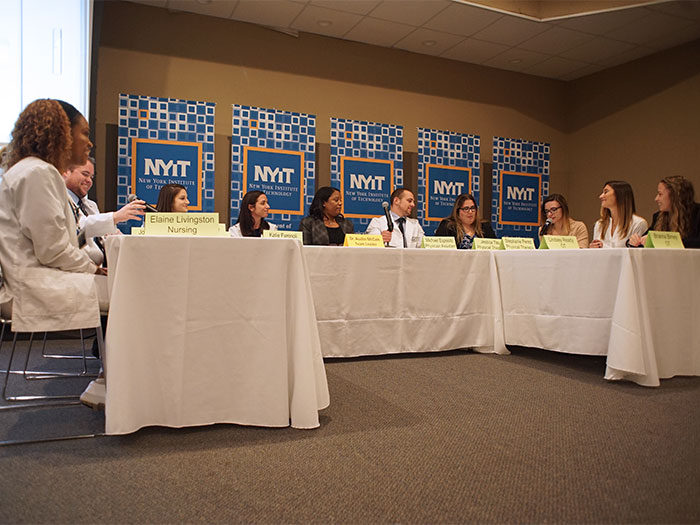 Also this year, the organizers incorporated video re-enactments, live improvisation, and audience polling into the event. The case study began with a video of a female soccer player sustaining a head injury at practice and her evaluation by an athletic trainer and coach, who recommended she go to the hospital. The scene then transitioned to the stage in Riland Auditorium where the students assumed their roles.

First, a simulated examination took place between the student-athlete and a nurse, then a physician assistant and osteopathic physician. Meanwhile, an intern who knows the patient was shown sending a text message to the student-athlete’s boyfriend informing him that she is in the hospital; the act unknowingly breaches the patient’s confidentiality. This added twist to the case study brought an ethical dilemma into question: Should the intern be terminated from her position? From her academic program? Both? Or is a verbal reprimand simply enough?

To help them decide, the audience watched a video of the intern in a meeting with the preceptor and hospital administrator to discuss the repercussions of her actions. While the student was more concerned with how the incident would affect her grades, the bigger issue was what course of action her supervisors would take. It was decided that the intern should be terminated from both the clinical internship and academic program. However, in a live poll, the audience, made up of students and faculty members, voted to only terminate her from the internship.

“‘Interprofessional’ is a buzzword right now,” said Jerry Balentine, D.O., vice president for medical affairs and global health. “We need to collaborate,” he said, stressing that it is important that all of the health professions gain respect and an understanding for one another. “We all have one job. And that is to heal the patient. We can only do it together. We can’t do it alone.”