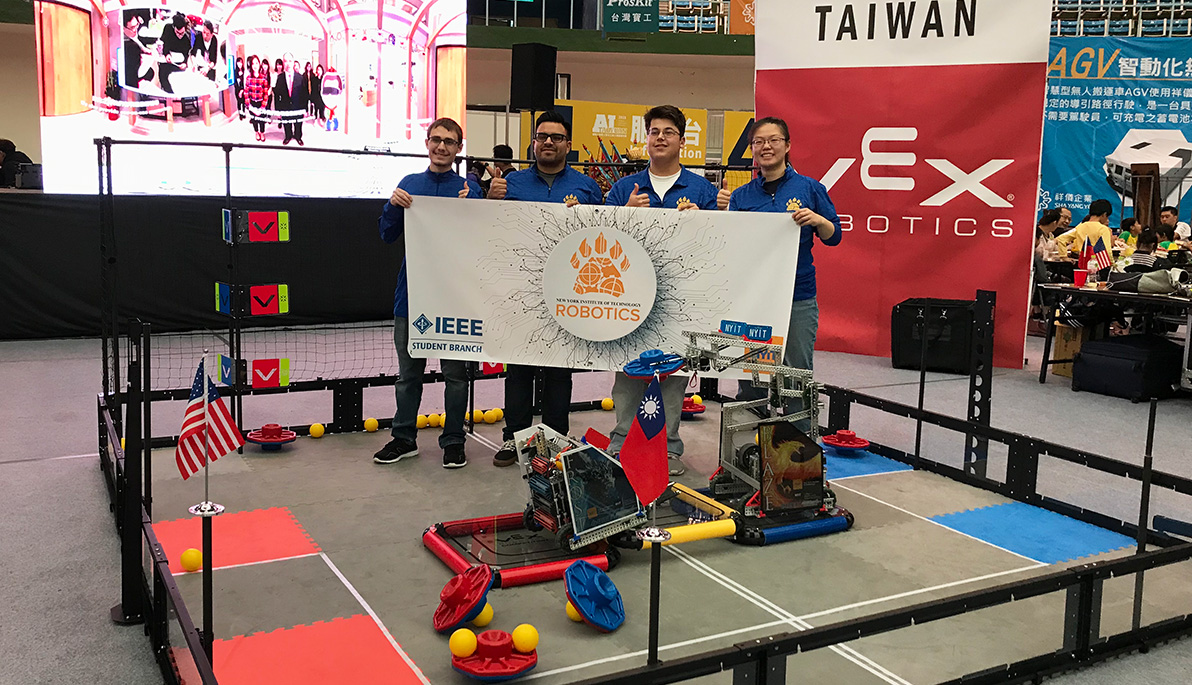 When the NYIT student branch of the Institute of Electrical and Electronics Engineers (IEEE) was asked to oversee a robotics competition for high school students in Taiwan, the group was naturally thrilled. “My initial reaction was awe and shock because we were being invited on a nearly all-expenses paid trip to run an event halfway across the world,” says electrical and computer engineering graduate student Kayla Ho, past chair of the student branch of IEEE at NYIT. “Those feelings were then replaced by excitement and honor to be hosting the first VEX Robotic Tournament within the larger AI Taoyuan Taiwan International Robotics Tournament.”

The three-day event, held in October, featured more than 100 different robotics tournaments in areas like aquatic, aerial, and terrestrial robotics. Thousands of individuals representing a variety of age groups participated. The high school competition at the Al Taoyuan Taiwan International Robotics Tournament was just one aspect of the event. Engineering student Michael Vangi, who traveled to Taiwan as part of the NYIT group, says he appreciated the level of sportsmanship within the Taiwanese robotics community. “They definitely value robotics and STEM,” he says.

In addition to judging the competition, The NYIT team was responsible for organizing and refereeing the tournament, an effort that required weeks of preparation, including conference calls with organizers in Taiwan and building two robots to bring to the event. “We worked with Amanda DiTrapani [senior specialist of professional development] to figure out logistics for the trip,” Ho says. “When we arrived in Taiwan, we hit the ground running with meetings and setting up the tournament.” 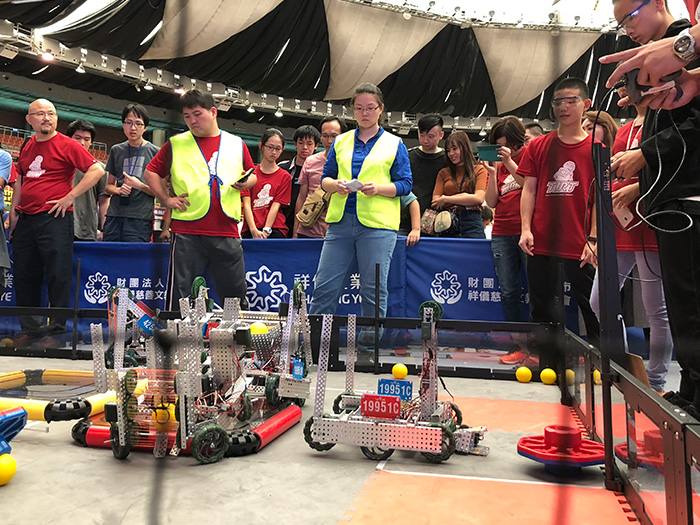 After equipment inspections were completed, Kayla Ho referees a qualifier in the first round of the competition.

The event was another achievement for the robotics team, which continues to impress at national and international events. “The NYIT team is known in the VEX Robotics community,” says DiTrapani, who accompanied the students to Taiwan. At VEX Worlds 2016, the NYIT team took first place in the robot skills category. Members of the IEEE group at NYIT also do their part to spread knowledge and understanding of robotics, volunteering at other community area organizations and mentoring at local high schools to introduce teenagers to robotics.

“The achievements of the NYIT-IEEE team, as exemplified by this competition in Taiwan, provide proof that the engineering and computing sciences students at NYIT share a common bond of team-spirit, technical excellence, and the doer-, maker-, innovator-mindset,” says Babak D. Beheshti, Ph.D., interim dean of NYIT College of Engineering and Computing Sciences. “I have witnessed the personal and professional growth of the current NYIT-IEEE team within just a few years. We are proud of our students, and we are proud of the intellectually stimulating environment we have provided them to thrive.”

Having their reputation spread to Taiwan is evidence of the respect the NYIT IEEE team has garnered, according to DiTrapani. Ho and her teammates also credit their mentor Jesus Moo (B.S. ’16) as well as numerous individuals within the College of Engineering and Computing Sciences who helped to coordinate their travel and activities with helping them succeed. “A big thank you also must be given to our sponsor for the trip, Sha Yang Ye Cultural Charity Foundation, and the personnel who arranged our entire trip,” says Ho.

After being part of the competition in Taiwan, the NYIT team sees a bright future for robotics around the globe. “I think our biggest take away from the experience is that the world is full of amazing opportunities,” Ho says. “If you had asked me a few years ago whether I would see myself running a robotics tournament in Taiwan, I probably would have thought you were joking. The possibilities are endless, and this was an exceptional one that I hope we have the opportunity to repeat.”