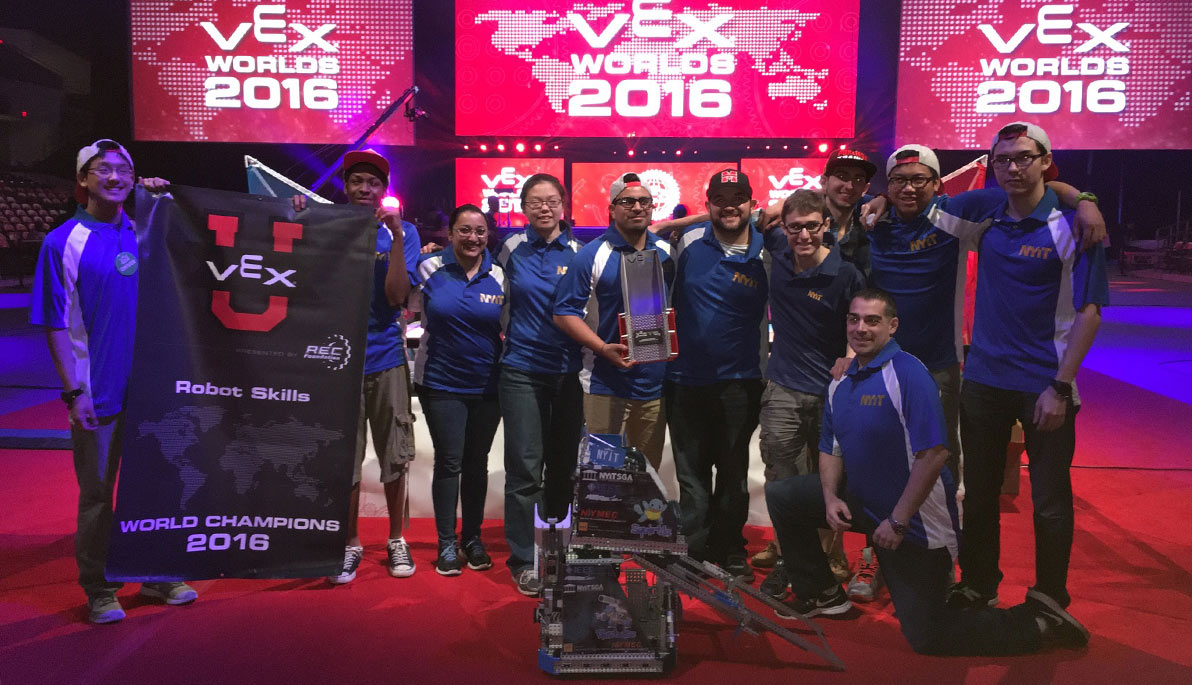 That’s the new label for NYIT’s robotics team, which beat dozens of global competitors to take first place in the robot skills category at VEX Worlds 2016 in April.

The NYIT Institute of Electrical and Electronic Engineers (IEEE) student team racked up numerous points and trophies, also winning the Amaze Award (for robot design, performance, and programming strength) and taking fifth place in the programming category and 14th in the design division. Alumni team member Ricky Mortimore (B.S. ’15) won Mentor of the Year for his work with Farmingdale High School’s robotics team. He was on the first NYIT team to enter the VEX competition (in 2011) and has participated on each successive team.

“When we walk into the competition, people know us,” added Mortimore. “I would say we definitely have swagger.”

Preparation began last year when competition organizers issued the course, known as “Nothing But Net.” Teams from China, Colombia, Paraguay, Lebanon, and the United Kingdom, among other nations, built robots to compete alone and against each other in a 12-foot-square arena. This year’s competition required the robots to deposit small balls in goals at the corners of the arena.

But getting to the world competition in Louisville, Ky., proved almost more difficult than the actual challenge. The team attended qualifying meets in Maryland and New York but did not have enough points to enter the championship until it scored highly in several competitions just weeks before the event.

Once they qualified, the team members drove south with robots Squirtle and Blastoise, named for characters in the Pokémon video game/trading card franchise. The robots performed well autonomously—a result of strong programming—as well as in matches where team members controlled them.

Co-captain Kayla Ho, a third-year electrical and computer engineering major, was central to the effort thanks to her speedy method of loading balls onto the top of each robot after which a rubber band-driven slingshot mechanism fired the balls into goal.

“We put 433 points on the board during the first match, and we never looked back,” Marsicano said, noting the team’s initial high score held for four days against teams from Mexico and Connecticut.

Under Mortimore’s tutelage, the team developed a key low-tech skill: careful note-taking to record errors, strengths, and programming or design corrections. Team members also spent hours on hundreds of practice runs once they finished building Squirtle and Blastoise a few months ago.

“This team is here on the weekends, late until 9 or 10 o’clock on weekdays,” Marsicano said. “They know the night shift guards.”

Ho, the self-described “mom” of the group and one of two female members on the team, said communication skills were paramount.

“You could have a good robot, but if you can’t communicate with team members, you can’t achieve the level of excellence you want,” said Ho. “We learned to communicate better with each other throughout the year.” She hopes more students will get involved in future competitions, which can help students grow academically, socially, and professionally.

“It’s always great to try to design something for a specific goal,” Ho said. “That’s the engineer in all of us.” During the triumphant 14-hour car ride back to New York, the team began planning for next year’s competition. But the students are still savoring the recent victories and hardware—both the robotic and championship varieties.

“I don’t want the robots or trophies locked away,” said Mortimore. “We’d like to show them off. The robots won against teams from China, Russia, Japan. They went through battles.”

In addition to its technical prowess, Mortimore noted the team is known for sportsmanship, including its willingness to help competitors with parts when needed. 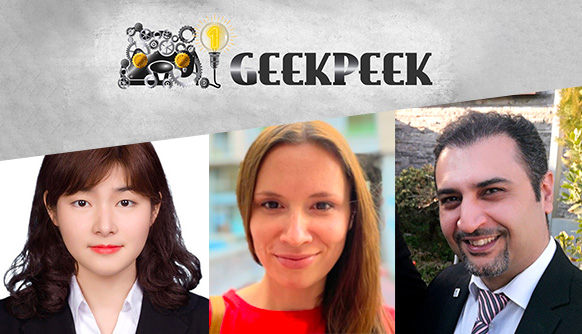