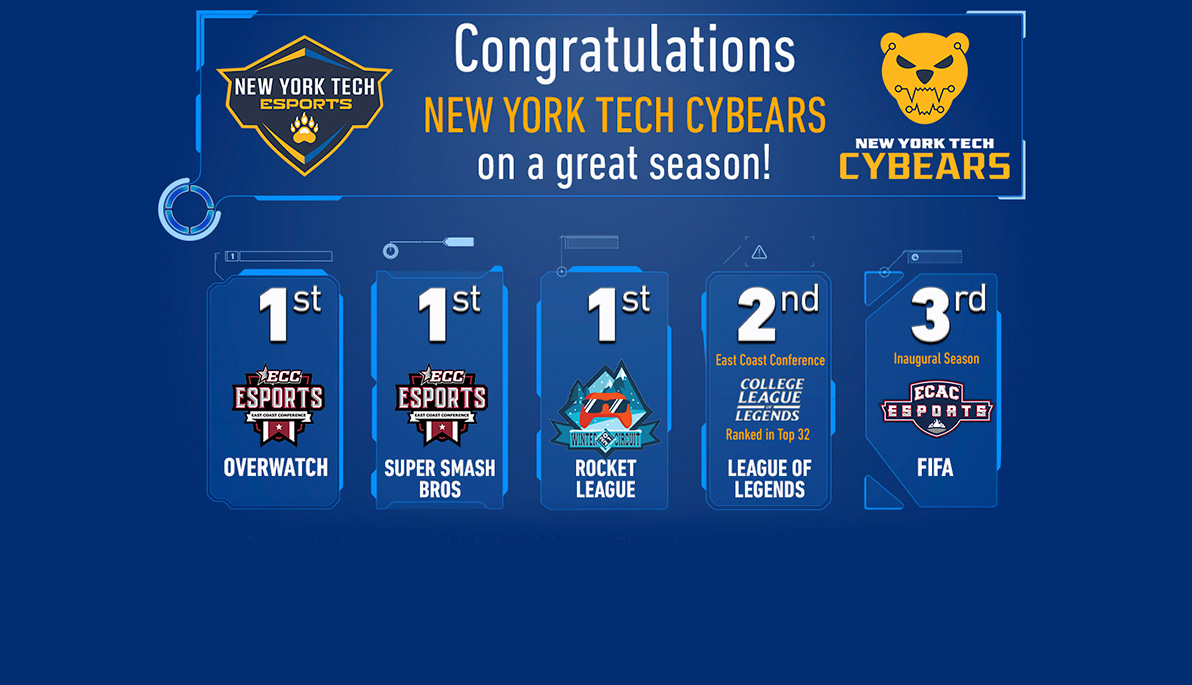 The collegiate esports season has now come to a close, and it has been another campaign filled with success for the New York Tech Cybears.

The team took home their first silverware in the fall when they won the 2020 East Coast Conference (ECC) Overwatch Championship, and the winning did not stop there. This spring, the team added the Super Smash Bros title and the Rocket League championship to the trophy cabinet, and they were runner-up in League of Legends and took third place in the FIFA competition.

“We are all extremely proud of what the Cybears have achieved this season and look forward to a very exciting future ahead for the team,” said Executive Vice President and Chief Operating Officer Jerry Balentine, D.O. “At New York Tech esports, our mission is to build an inclusive environment where, alongside our market-leading expertise in esports science, our team is able to thrive and demonstrate best practices that help the whole esports ecosystem.”

Despite coming up just short in the latter two titles, the feats were cause for celebration, with the League of Legends team ranked in the top 32 nationwide and it being the FIFA team’s inaugural season competing together.

The year has seen the Cybears continue on their upward trajectory, building on the team’s successes last season, where they were crowned ECC League of Legends Champions in 2019. The team is also growing in size, with a roster of more than 80 students and an expectation for that number to exceed 100 team members for the 2021-2022 season.

Whey they weren’t competing, the team also found time to raise money for charity, raising nearly $1,000 for Relay for Life, through a 12-hour virtual streamathon. On April 23, ten members of the team received charitable donations for continuously playing titles including Super Smash Bros, Among Us, and Pictionary from noon to midnight.

Follow the Cybears throughout the upcoming season via Twitter and Discord, and watch live games and highlights on the team’s Twitch and YouTube channels. Also look out for the launch of the New York Tech esports website, coming this summer.

Learn how you can take part next season—as a competitive gamer or lending your social media, video production, or photography skills. Email the Cybears for more information.

This story was contributed by Aron Moore, director of academic and business esports development.