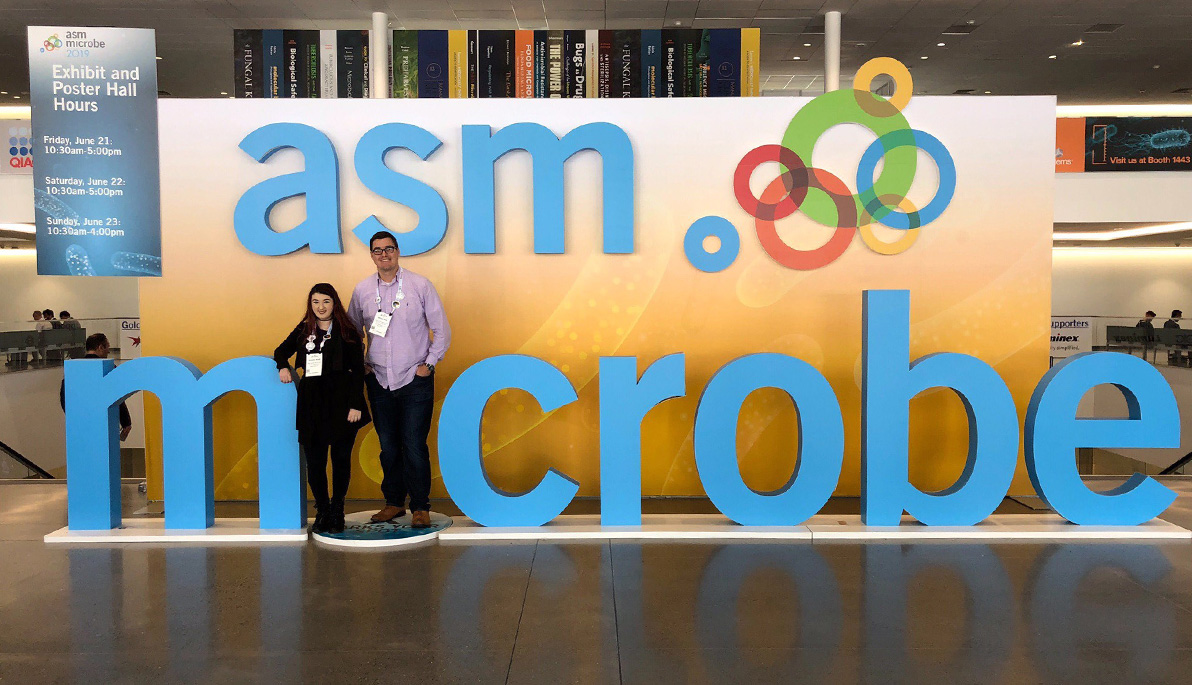 Biology major Brianna Weiss presented research findings on the isolation and characterization of novel bacteriophages (which could provide the answer to antibiotic-resistant bugs) from kitchen sponges at ASM Microbe 2019, the annual meeting of the American Society for Microbiology. Weiss, whose work on the project focuses on characterizing strains of bacteria and phages, is one of four students who work on the study. Classmate Helly Amin is working on genome sequencing, and before graduating, alumni Lovejit Kaur (B.S. ’19), and Linesha Davis (B.S. ’18) isolated strains of bacteria and phages.

This isn’t the first time their research has garnered attention. The group won first place in the poster competition at the Metropolitan Association of College and University Biologists (MACUB) conference in October 2018.

Weiss was able to make the trip to San Francisco with the support of an Edward Guiliano Global Fellowship. “I face a lot of financial hardships at home,” she said. “The only way I was going to be able to present the research my team and I worked so hard to collect was if I had received some sort of funding. Because of the opportunities New York Institute of Technology provided for me, I was able to turn my dreams into a reality.”

Their findings on the potential use of bacteriophages as an alternative treatment for bacterial infections also captured the attention of media outlets around the world. Coverage of their work can be seen in Spain, Canada, India, and beyond.

“To be able to say that the research I am a part of has received the attention of media outlets all over the world is absolutely surreal,” Weiss said. “I always believed in the research I was a part of, but I never expected that scientists from across the world would see this work as so unique and revolutionary.”

ASM Microbe attracts nearly 10,000 attendees from all over the world. “It’s hard to overstate the type of opportunity this presents to undergraduate students,” said Assistant Professor Bryan Gibb, Ph.D., the students’ mentor. “I am especially proud that we are able to do this type of research and attract this type of attention with undergraduate researchers. I came to New York Institute of Technology for just this reason.”

Weiss said attending the ASM meeting was an experience she will never forget. “I was able to meet so many wonderful people, learn about so much extraordinary science, and become more confident in myself as a young female scientist.” Weiss looks forward to graduating this December and plans to pursue a Ph.D. in clinical microbiology or infectious disease. “This was such an incredible way for my college experience to come to an end.”

In a Facebook Live session, Weiss, Davis, and Kaur demonstrated the steps in their hunt for bacteriophages. Watch the video.