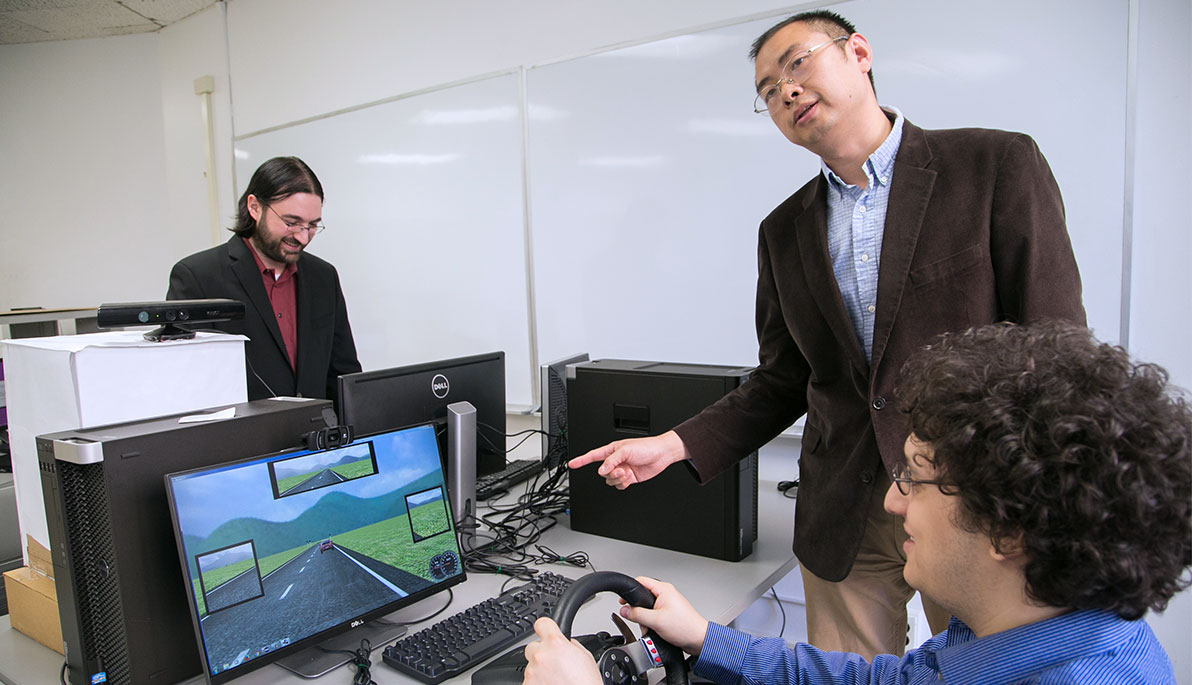 Photo: Matthew Warshaw sits behind the wheel of the driving simulator while Jonathan Voris, Ph.D., (left) monitors the software that will track his driving habits and Wenjia Li, Ph.D., (right) explains the set up.

Six floors above street level at 1855 Broadway, electrical and computer engineering student Matthew Warshaw (B.S. ’18) is driving down the highway. There are mountains in the background, grass on the side of the road, a stoplight. Cars cross an intersection; a pedestrian darts out in front. But Warshaw isn’t in a real car. Instead, he is behind the wheel of a driving simulator—an invention of NYIT School of Engineering and Computing Sciences’ Assistant Professors Jonathan Voris, Ph.D, Wenjia Li, Ph.D., and Nabi Sertac Artan, Ph.D.

As Warshaw drives, data is tracked and logged as to how he responds to different conditions, such as how long it takes him to switch on the blinker before he turns, how close he gets to other cars before he passes them, and where he positions the car within the lane.

“I get to analyze the data and look for patterns by using algorithms and building statistical models to make sense of the data,” says Warshaw, whose work with Voris, Li, and Artan on driver modeling is preparing him for a graduate degree in machine learning. Warshaw is also in charge of getting students to be the simulator’s drivers. “I put up fliers. I grab students in the hall,” he says. “Watching my friends drive and flip over, sometimes four or five times, gives me a good idea if I should ever be a passenger in their car!”

“The data shows how you drive,” says Voris. “By analyzing it, we can detect deviations of that behavior to determine whether it’s you driving or someone masquerading as you.” In other words, the data can show whether your hatchback has been hijacked. So far, the driver authentication study has been able to identify who is driving in under two and half minutes and with 95 percent accuracy. “When the data is analyzed,” adds Voris, “it’s not one indicator but a complex system of indicators.”

Smartphones have become an additional appendage we can’t seem to live without. Smart cars are poised to become just as ubiquitous. Ultimately, the goal is for the data to be incorporated into a driver’s vehicle, so that the car itself can alert a driver that it's been stolen. The car could also use the data in other scenarios—like alerting an automobile insurance company that the policyholder is not a very good driver…

Voris, Li, and Artan have been approved for their second round of funding from the University Transportation Research Center (UTRC), an organization established by the U.S. Congress in 1987 to support research, education, and the transfer of technology in the field of transportation. With the second UTRC grant, the professors will move their focus from driver modeling to how to transmit information between vehicles. “We’re working to ensure that the information is accurate and correct and that the transfer of information is efficient and safe,” says Li.

The new study is right on the cutting edge of their field. In December, the U.S. Department of Transportation in Washington, D.C., announced proposed rules that require all new cars and small trucks to contain wireless communications technology to broadcast data to one another about their speed, location, and direction. According to the National Highway Traffic Safety Administration, vehicle-to-vehicle (V2V) communications technology is a promising way to combat vehicular deaths, ease traffic, and improve the environment.

And V2V technology may soon be put to the ultimate test. While consumers have grown more accustomed to “smart” cars, companies like Tesla, Google, and Uber are working on removing the driver entirely. “Figuring out how we can apply V2V technology to autonomous vehicles is in the back of our minds,” says Voris.