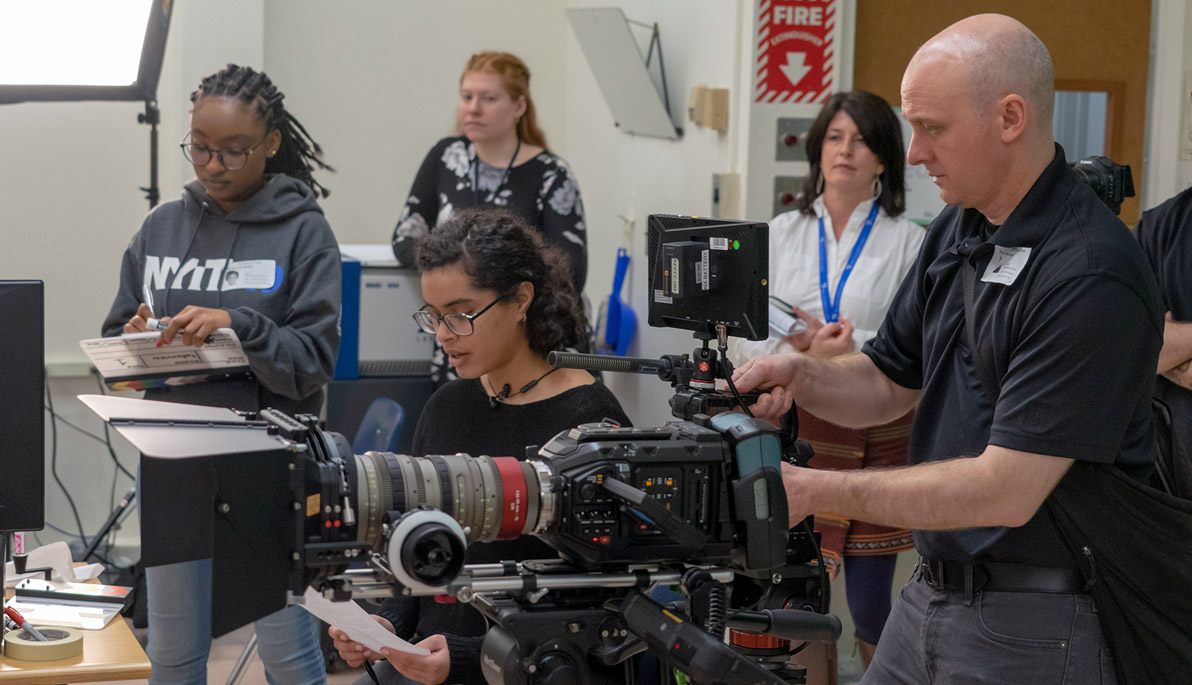 Students at the Henry Viscardi School in Albertson, N.Y., are encouraged to look beyond their disabilities and recognize that they can achieve whatever they set their minds to. For the past five years, the Henry Viscardi School of The Viscardi Center—a network of nonprofit organizations that provides a life span of services that educate, employ, and  empower people with disabilities—has been partnering with JetBlue to take its students on a flight to Boston, where they not only experience the joy of flying but also set their sights on their highest aspirations through experiences they might not otherwise have.

All of this is captured in the short film Ready for Takeoff, which is produced by New York Institute of Technology students and makes its debut in October as part of National Disability Employment Awareness Month. The five-minute video takes viewers on the flight and, along the way, enlightens them about this unique endeavor.

New York Tech has collaborated with The Viscardi Center on other projects, including collaborative courses between the university and students of the Henry Viscardi School. “Once you step foot in Viscardi, you want to stay involved,” says Terry Nauheim, M.F.A., former associate professor of digital art and design and executive producer of the film. “It is such an enriching and effective place for people with disabilities.”

Watch the film and read more below.

Nauheim pitched the idea of having students from the university make a video about the fifth flight that Henry Viscardi School students would be taking on JetBlue. Her suggestion was quickly accepted. “And then we had a year and a half to figure it out,” Nauheim says. “It was a huge undertaking for many of us and a very fulfilling one, including JetBlue’s effort to bring our team of students and faculty into an already multifaceted project.”

The project got underway in the spring of 2018, when Paul Demonte, M.A., adjunct instructor of communication arts, and Michael Hosenfeld, associate professor of digital art and design, traveled on the fourth JetBlue flight. “This led us to understand the type of story that needed to be told,” Demonte says. Since a shorter version of the film would also be shown on the seat backs on JetBlue planes, the trip helped Demonte and Hosenfeld grasp the technical challenges that the students might encounter.

Demonte and Hosenfeld may have served as supervising editor and faculty director, respectively, but this was the students’ production. “They were fantastic,” Hosenfeld says of the students involved with the film. “They signed up for one course, but the time on the project was about two and a half to three times that much. They were able to put it all together and work as a team, which demonstrated the relevance of what they have been learning in the classroom.”

Working on the film provided real-world lessons, including how to overcome challenges. “The biggest challenge was narrowing the scope and zeroing in on our narrative,” says digital film and television production major Paul Wasneski (B.F.A. ’19), who worked in preproduction and was a lead cameraman during filming. “At first, we just had scattered bits and pieces, but we weren’t sure how to tie the whole thing together or if we should be expanding the focus of the film with things like going to the kids’ houses and interviewing their families.” In the end, the New York Tech student team landed on the right amount of background to tell the story of JetBlue, the Henry Viscardi School, and the students who took the flight.

The actual day of filming was long yet rewarding. “I was one of three students who flew on JetBlue and the only female,” says digital film and television production major Anastasia Adruzova, who served as a camera operator. “I didn’t sleep for 23 hours that day. We shot all day, but none of us complained that we were tired.”

The professionalism of New York Tech’s student team ensured a successful outcome. “To have a reliable team of people to work with made everything flow smoothly,” Demonte says. Adds Hosenfeld, “The students’ self-organization and ability to communicate with each other outside of the classroom was very important.”

The finished product weaves a powerful, emotionally charged story about the JetBlue-Viscardi collaboration and its impact on Viscardi students. “I love the final product the most,” says communication and media production student Gilary Ramirez, who worked through the summer on editing the film. “So many times, you’re frustrated with the footage you have, or you’re tired from lugging equipment everywhere, so it’s easy to wonder what you are trying so hard to accomplish. For me, watching that final product answers that question, and it’s something concrete you get to keep with you and shows that all of your hard work paid off.”

In addition to the five-minute video launched this month and the two-minute video to be shown on JetBlue flights in November, the New York Tech students produced a 10-minute film they plan to distribute for consideration at various film festivals. Together, the films aptly achieve the goal of portraying Viscardi students as intelligent, caring members of the community with personal and professional ambitions beyond high school. Through their hard work on the films, New York Tech students enjoyed a professional experience with added benefits. “This project gave me something substantial that I can spotlight under my volunteer activities,” Wasneski says. “It was humbling working with young adults with special needs.”