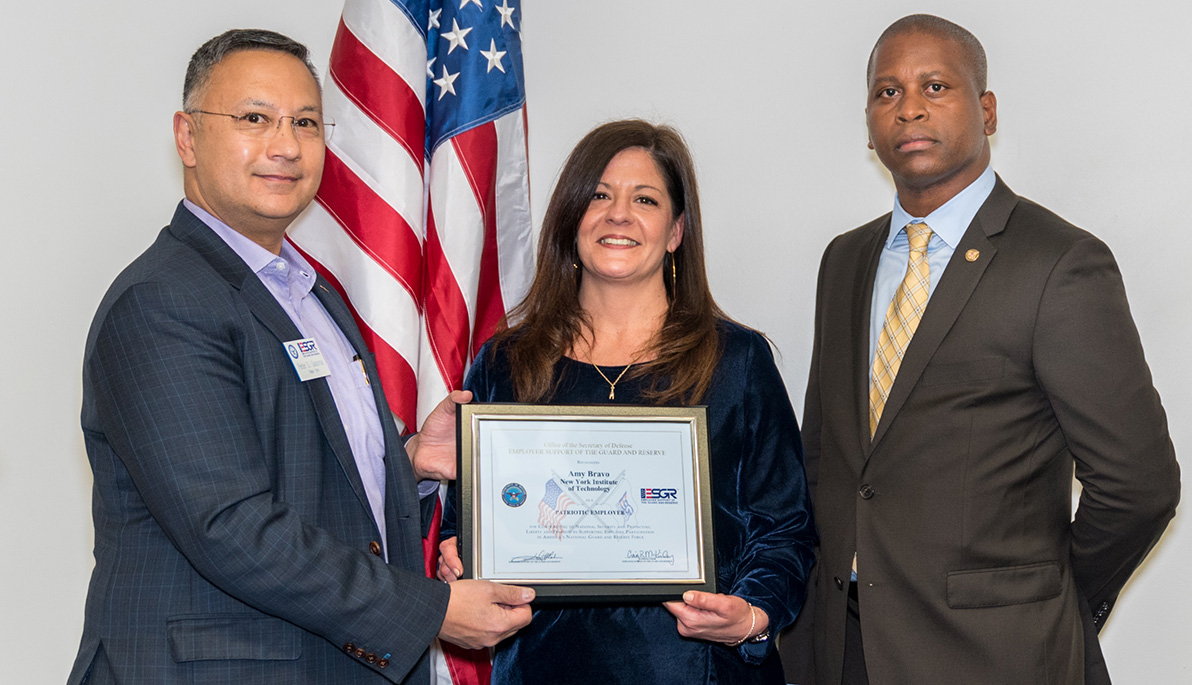 On March 29, Amy Bravo, M.A., senior director of International and Experiential Education, was honored with the Patriot Award, an employer award bestowed on outstanding supervisors of National Guardsmen and U.S. Military Reservists by Employer Support of the Guard and Reserve (ESGR), a program under the U.S. Department of Defense. Bravo was nominated by Navy Counselor and NYIT senior Nigel Winston Casanova, who worked for Bravo as director of veterans community outreach and who has been serving in the U.S. Navy for more than 20 years.

Casanova’s nomination essay described Bravo’s virtues as a supervisor and as a supporter of military members and veterans at NYIT.

“Transition from military life to college life is very difficult,” Casanova said at the brief ceremony, held as part of Friday’s Academic Senate meeting. “Having someone like Amy is key. Thank you for your time, dedication, and energy, and for showing us veterans how to manage on this campus,” he added. 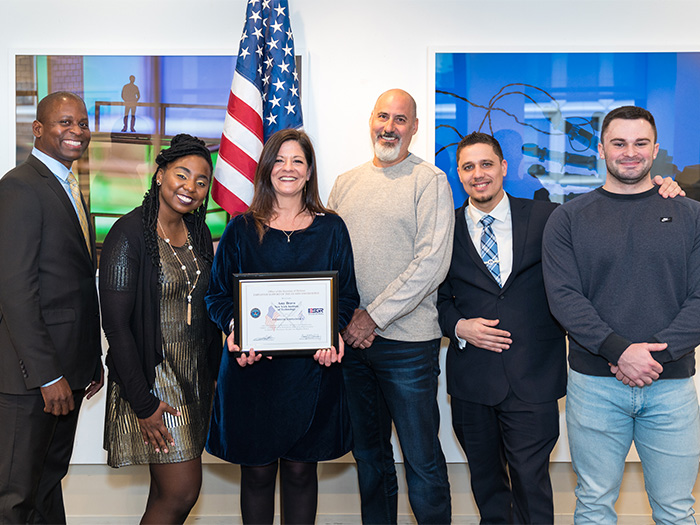 In addition to hiring several veterans as student workers in her department, Bravo has acted as the chapter advisor of NYIT’s Student Veterans Organization (SVO), was a member and director of the Veterans Steering Committee, and participated in the committee that hired Frank Rivera, NYIT’s first director of military and veterans affairs.

This is in addition to her day-to-day responsibilities, which include developing experiential education programs among students, faculty, staff, and community organizations. “None of the work Amy has done with veterans is part of her job description. She does it out of her passion to make our students’ experience as smooth and as strong as possible,” said Associate Provost Francine Glazer, Ph.D.

Bravo was presented with a plaque from the Department of Defense’s designee: New York Area Representative of ESGR Peter Galasinao, a retired commander in the U.S. Navy.

“It was a joy working with our veterans,” said Bravo. “They are very solutions-oriented, as am I. And they keep me on my toes. It truly takes a community, and I accept this award on behalf of all my colleagues who also have enthusiasm for helping veterans at NYIT.”