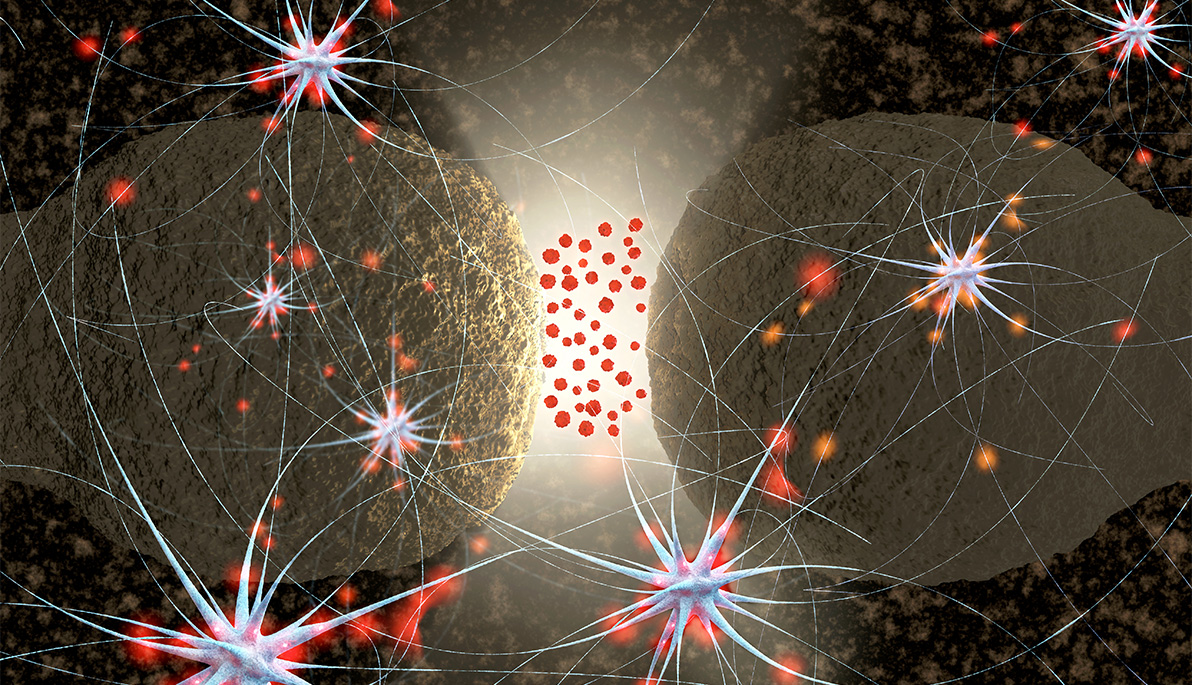 In a new study funded by the National Institutes of Health (NIH), Weikang Cai, Ph.D., assistant professor of biomedical sciences at the College of Osteopathic Medicine (NYITCOM), will examine how chronic stress impacts brain chemistry and contributes to clinical depression. The research project, which is estimated to receive $1.6 million in NIH funds over five years, could help identify breakthrough treatments for clinical depression, which affects more than 260 million people worldwide.

Dopamine, which is often referred to as “the motivation molecule,” is released from nerve cells when the brain anticipates a reward, signaling it to command behaviors that ensure a pleasant experience or avoid harm. When the brain associates a behavior with this reward, dopamine is also released in future scenarios, reinforcing the behavior. This habit-forming cycle, known as the reward system, motivated prehistoric humans to perform activities that met their daily needs, such as finding food. Today, dopamine signaling is often suppressed in patients with clinical depression, suggesting that dopamine imbalance causes certain behavioral symptoms, including lack of motivation. However, little is known about how the brain regulates dopamine.

“We hope these studies provide new insight into the neural processes that contribute to major depressive disorders, as well as identify novel therapeutic treatments to help prevent and treat clinical depression,” says Cai.

Joined by NYITCOM’s Randy Stout, Ph.D., assistant professor of biomedical sciences, and Emmanuel Pothos, Ph.D., associate professor at Tufts Medical School, the three researchers contend that brain cells called astrocytes play a key role in dopamine regulation. Unlike some other brain cells, astrocytes do not emit electrical signals, but the team theorizes that they pose a critical role in setting the stage for dopamine release. They hypothesize that astrocytes release the energy-carrying molecule adenosine triphosphate (ATP), which delivers messages to nerve cells, enhancing dopamine production.

During stressful situations, Cai posits that astrocyte-nerve cell communication may be lost, hindering dopamine production and contributing to the development of major depressive disorders. If his theory holds, the findings could help to find new treatments for these conditions. Interestingly, Cai has previously shown that insulin stimulates astrocytes to release ATP, an act that is often impaired in diabetes patients. Accordingly, this new study may also explain why these patients are prone to depression.

Cai and his fellow researchers will test his theory in mice with astrocytes that are unable to release ATP. The team will monitor for correlations between ATP levels and dopamine signaling, as mice experience mild but aversive and unpredictable environmental stressors, such as abnormal lighting and background noises. The researchers will also observe whether mice display a lack of motivation when astrocytes cannot initiate the process that ultimately enhances dopamine release. In other words, the animals’ behavior will likely mirror that of humans with clinical depression.

“Identifying new treatments is particularly important because not all available medications are effective for patients living with depression, despite the prevalence of the condition and its tremendous social and economic burden,” says Cai.

The NIH, part of the U.S. Department of Health and Human Services, is the largest biomedical research agency in the world. First-year funding for this project totals $327,572. This grant was supported by the National Institute of Mental Health under Award Number R01MH125903. The content is solely the responsibility of the authors and does not necessarily represent the official views of the NIH.