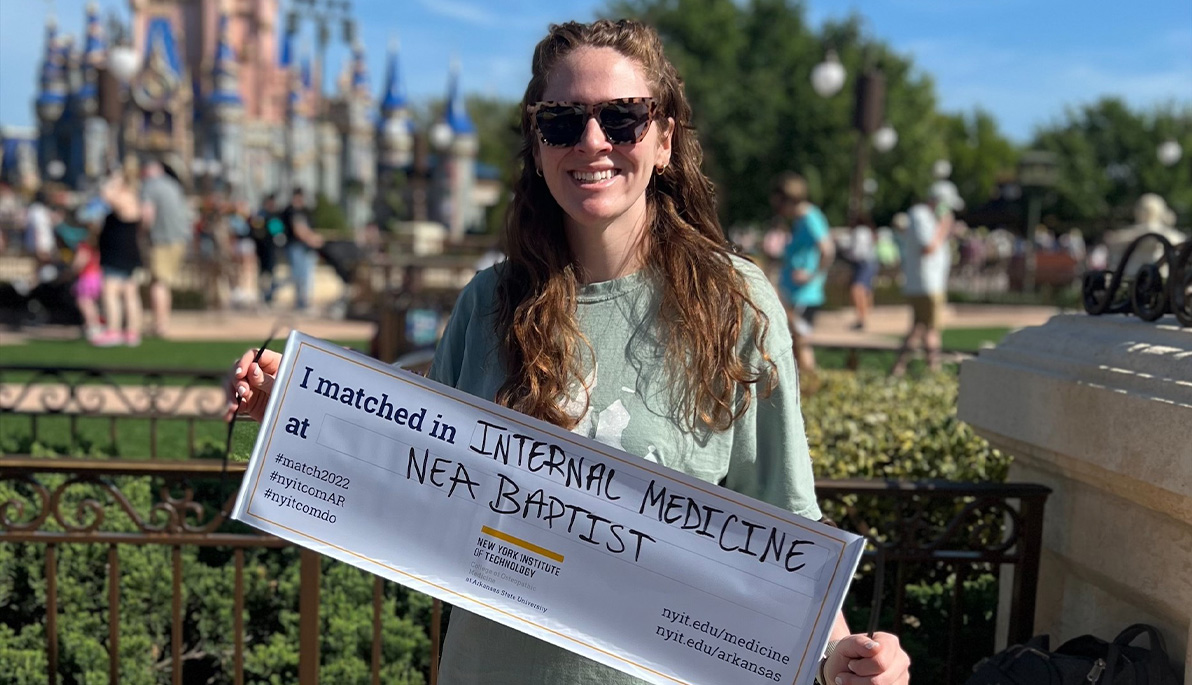 When it came time to decide where she’d pursue her medical degree, Taylor Rutherford recalled a simple question from a friend that solidified her choice.

“I remember someone asking me, ‘Where do you want to practice medicine?” Rutherford recalls. “I quickly responded, ‘Arkansas,’ and my friend said, ‘Then why would you even think about going somewhere else?’ They were right, and I’m so grateful for that conversation.”

Rutherford, who grew up in Searcy, chose to attend the first osteopathic medical school founded in her home state, and on May 25 she will earn her Doctor of Osteopathic Medicine degree from NYITCOM-Arkansas.

“I’m a person of faith, and I believe everything happens for a reason,” Rutherford says. “I feel like I was destined to be here. I got a great education, made lifelong friendships, and I met my future husband while in Jonesboro. I will always be so thankful for NYITCOM.”

For Rutherford, graduation marks the culmination of a lifelong dream of becoming a physician. It started after a pediatrician visit when she simply thought the doctor was “cool.” Her passion for becoming a doctor grew after shadowing healthcare professionals through a program her high school offered.

“I vividly remember one day in the emergency department when a patient was having a heart attack,” Rutherford says. “The physician was as calm and collected as making breakfast on a Sunday morning as he orchestrated the nurses and staff on what needed to be done while they stabilized the patient. Out of all these people in this room, I knew I wanted to be that one.”

While she was committed to becoming a doctor, it was another experience in high school that helped Rutherford determine what type of physician she wanted to be. Her mother was battling an ongoing gastrointestinal issue. Repeated visits to the clinic left them without answers until one physician went the extra mile to find a solution.

“We finally went to the ER and saw a doctor that really listened to her and came up with some unique ways to try to diagnose her,” says Rutherford. “She had emergency surgery within three hours, and her issue was resolved. I saw a physician that took his time and had the ability to understand that the patient knows more about themselves than we do. That set my goal on fire.”

“They talked about listening to your patient, and I recalled that situation with my mom,” Rutherford said. “They also discussed how osteopathic training helps address structural issues, and they discussed the holistic approach to medicine that osteopathic physicians take. At that point, I decided that I was only going to apply to osteopathic medical schools.”

At the time, there were no osteopathic medical schools in Arkansas, but that changed while Rutherford was completing her undergraduate degree. Rutherford visited NYITCOM’s Arkansas campus while she was completing a Master of Biomedical Sciences in Mississippi, and after spending some time in Jonesboro, something just felt right.

“During my visit to NYITCOM, I got that feeling. I could tell the support and community were there, and all of that turned out to be true. It was a great experience,” she says.

Much to her pleasure, Rutherford will remain in her home state upon graduation from medical school. In July, she’ll begin her internal medicine residency at NEA Baptist Health System in Jonesboro, and she’s thrilled with the opportunity to serve in a region where the need for quality healthcare is so significant.

“I love Arkansas,” Rutherford said. “There’s such a need for physicians and for patient education and engagement. I know the reason we rank so poorly in so many areas is in large part because of the physician shortage. There are so many patients you come across that don’t even know why they should take insulin and what would happen if they don’t, or they don’t understand the significance of their cardiovascular disease. I feel like just one more physician that cares to get to the core of patient issues can make a difference, and I’m committed to doing just that.”