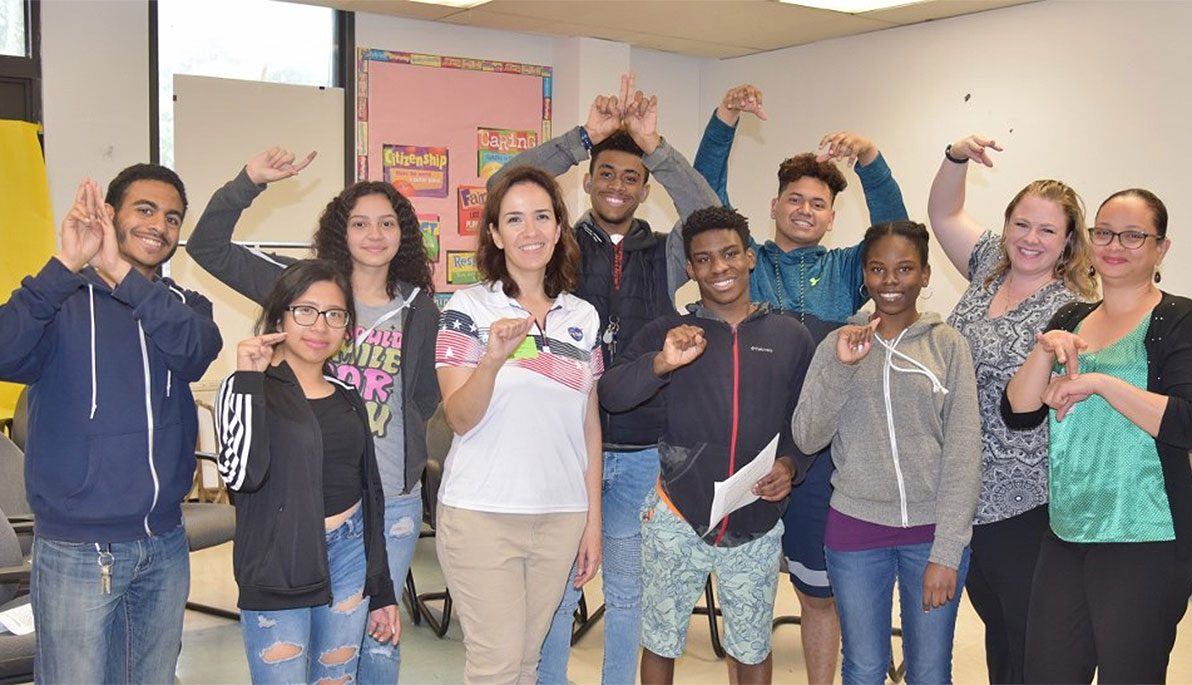 Pictured: Rosalba Giarratano (center, in white) with students she has worked with as part of NASA GLOBE US Air Quality Student Research Campaign. Credit: Cindy S. Casson, Lexington School for the Deaf.

A year after beginning her graduate studies at NYIT, Rosalba Giarratano received an email from NASA Glenn Research Center saying she had been nominated by NYIT to apply for a week-long professional development course at the Cleveland-based facility. “When I first read the email, I suspected it was a phishing attack!” she recalls. “I immediately called Dr. Shiang-Kwei Wang [her professor]. She confirmed the email was legit.” Giarratano stayed up late that evening writing an essay; she found out four weeks later that she was one of four NYIT students who had been accepted into the program. “We learned a lot about implementing STEM hands-on lessons using NASA resources,” she adds.

The experience with NASA Glenn led to a semester at NASA Kennedy Space Center in Florida, where Giarratano developed an online professional development module about space plant growth, and another semester at NASA Langley Research Center in Virginia, where she assisted with the Global Learning and Observations to Benefit the Environment campaign for air quality research. She later brought that program to a school in her New York neighborhood, and she continues to work for Langley remotely.

Giarratano earned a B.S. in electronics and communications engineering in her native Mexico City and was eventually transferred to New York for her job as an IT project manager with a Swiss financial company. When she decided to pursue a master’s degree in education, she found that NYIT offered the ideal situation. “NYIT allowed me to study online late at night after I was done with my full-time job and once I had put my son to sleep,” Giarratano explains. NYIT also places a strong emphasis on integrating technology into education, she notes. When she earns her degree, Giarratano looks forward to melding her previous business skills with her current experiences.

Giarratano offers this advice for other NYIT students: “Actively look for opportunities that interest you and work super hard to get them. Do not be afraid to take risks, talk to people, email people. Like my mom says: You already have the ‘no.’ You might as well try for the ‘yes.’”