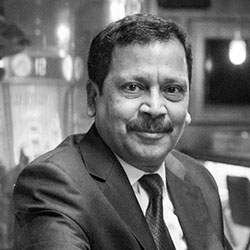 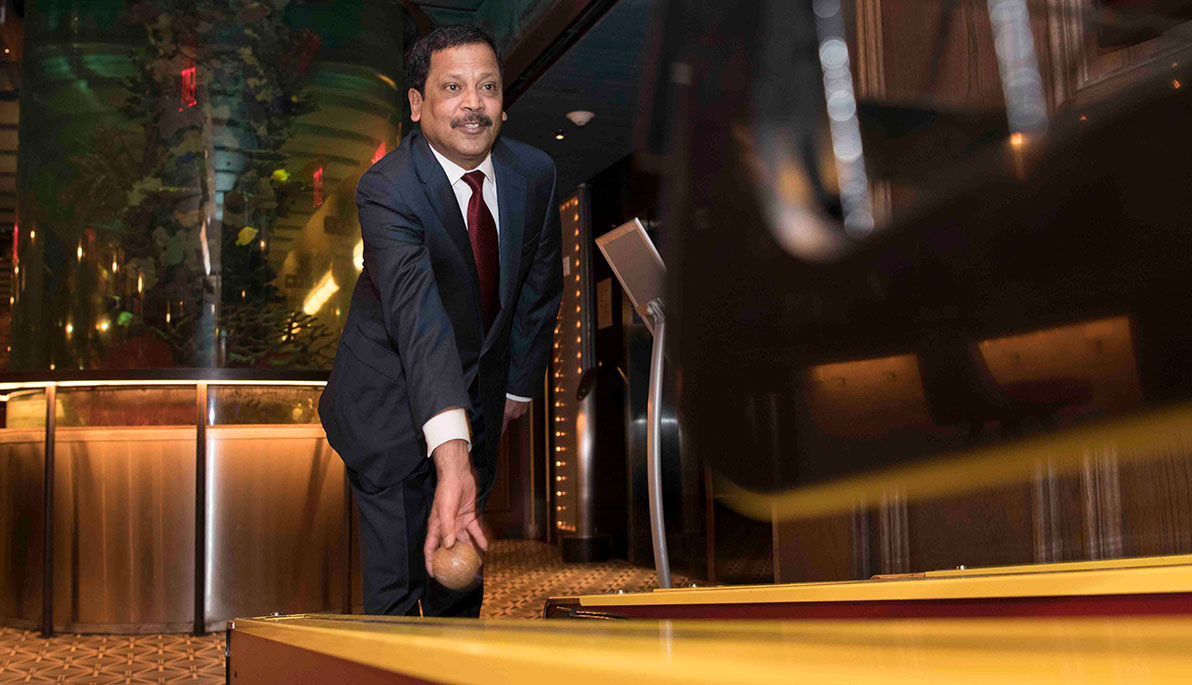 “I look back and see where I started, and I look up to the sky and thank God for where I am today,” says Riyaz Akhtar (M.B.A. ’91). As executive vice president of the Dream Hotel Group (DHG), Akhtar oversees human resources for the upscale lifestyle hotel brand and management company, which operates hotels all over the world. (Akhtar is pictured above bowling in the très cool Fishbowl Bar, Lounge, and Game Room at Dream Midtown NYC, 210 W. 55th St.—just six blocks from the Manhattan campus.) “I also oversee all real estate that belongs to DHG and head the management of all facilities owned and operated by DHG,” he says. He is immensely grateful for his success, a feeling that has inspired him to give back to others, including NYIT students.

Akhtar was born and raised in India. When he was a child, his father couldn’t afford to send him to school. His elementary and secondary schooling was paid for by the Christian Children’s Foundation (CCF) through a sponsor from Chicago. Each year, she would send him $10 at Christmas and $10 on his birthday. That money was enough for him to buy clothes for the entire year. “When I came to the U.S., I asked to speak to her. I wanted to thank her for what she did in my life. I would not be here today,” he says. “I sent her a letter and never heard from her. She could have been very old; she could have died. I now [sponsor] CCF children all over the world to pay back what she did for me. I feel very strongly about helping people who do not have the means to pursue an education.”

In 1978, after getting degrees in accounting and law with scholarships from the Indian government, Akhtar was working for a conglomerate in Calcutta. He was tasked with bringing his 4-year-old nephew (who had lived with Akhtar for most of his life) to the United States. Once they arrived, his nephew did not want Akhtar to return to India. Akhtar decided to look for ways to stay. He met with Marvin Weiss, then dean of NYIT School of Management, and enrolled in the M.B.A. program—student visa in hand.

“Dr. Weiss was my mentor,” says Akhtar. “He helped me navigate customs, cultures, part-time jobs.” Later, Akhtar’s wife and one of his daughters also received degrees from NYIT. In 2012, the Riyaz Akhtar Family Scholarship was created, and in 2015, the Riyaz Akhtar Endowed Experiential Education Program was established, which gives students in NYIT School of Management opportunities to “learn through experience,” a crucial aspect of their learning process and road to success.

Helping the next generation has brought his own career path full circle. “One candle lights another candle,” Akhtar says. “Now that I’m better off in life, I can do my part to help others with financial difficulties.”