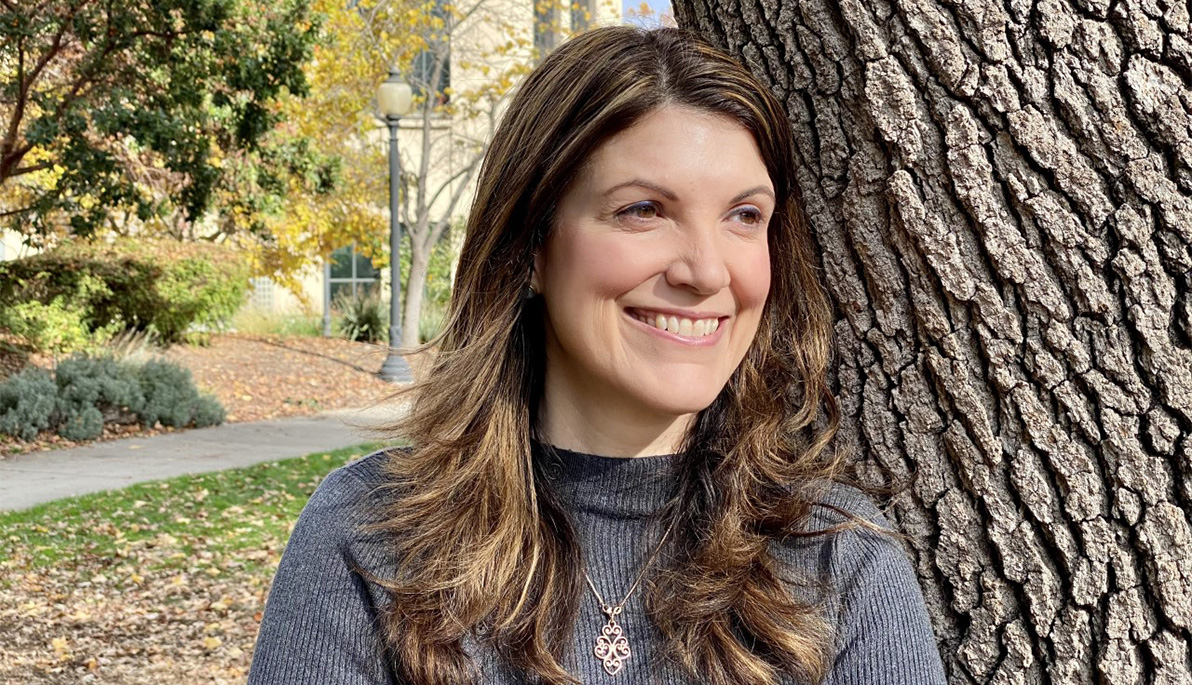 A seasoned communications professional and a former television news anchor/reporter for stations across the country, Lenka Wright (M.S. ’12) has specialized in local government over the last 13 years. In fall 2020, she became the first chief communications officer for the City of Mountain View in California, overseeing external and internal communications, including public information, media relations, marketing, branding, digital engagement, and the Multilingual Community Outreach Program. She sat down with The Box to talk about her long and successful career and where she finds her inspiration.

Tell us a bit about your background.
I now reside in Silicon Valley, California, but I am originally from Long Island, New York. My father raised me as a single dad from when I was a toddler after my mom died unexpectedly. To this day, he has always supported my dreams, no matter how far-fetched they may have seemed at the time, along with my educational endeavors. Growing up, I was naturally curious—a good trait for any future communicator—and always asked him why things were the way they were. He helped me realize my journalism pursuits, whether it was driving me to conduct my first interview as a seventh-grader with a pharmacist or, years later, recording my hosting of mock TV shows I produced for a couple of high school projects, to moving me out to Wyoming for my first full-time, on-camera TV news job.

Wha attracted you to New York Institute of Technology?
I chose New York Tech because of the high caliber graduate-level programs that prepared students with the appropriate professional skills for getting hired in a competitive job market. These programs included the now-defunct Long Island News Tonight that provided real-world experience in a TV newsroom environment for up-and-coming student journalists and skill-building classes such as website design.

You have worked in local news all over the country. Did you notice differences between different cities? Were there similarities no matter where you went?
Yes, I’ve worked at TV stations in Florida, New York, South Dakota, Texas, and Wyoming.

The country has much to offer beyond the states that I consider home, California and New York. I have met wonderful people in the places where I lived and been given unparalleled access to tell their stories. As a journalist, I had experiences that I never imagined would be possible as a kid growing up on Long Island, experiences like heading overseas to Bosnia-Herzegovina to see the work being accomplished there by the South Dakota National Guard, climbing to the top of Mount Rushmore with the U.S. National Park Service, and covering PGA golfers in their prime at the Players Championship in Ponte Vedra Beach, Florida. I have interviewed high profile newsmakers like former U.S. Secretary of State Hillary Clinton and retired U.S. Marine lieutenant colonel turned political commentator Oliver North, and celebrities including actor Kevin Costner, rapper/TV host Rob Van Winkle a.k.a. Vanilla Ice, and best-selling author Dean Koontz. The audiences may vary and the communities may have different priorities, but the one mainstay is the public has always appreciated good storytelling that is factual, compelling, and relevant.

There were several factors at play in my decision, but the primary one was that my husband was on active duty in the Air Force and, for my family, I chose to follow where his career led him as a pilot. I always had a great interest in government and politics, having been president of my high school’s Youth and Government Club as well as double majoring in political science and telecommunications in my undergrad studies at Indiana University. When we moved to Abilene, which is home to Dyess Air Force Base, an amazing opportunity became available with the City of Abilene. The position involved communications, including overseeing the city’s government channel and its programming, and ignited my passion for public service. As the program administrator for the communications program, I told the city’s story by tapping into my journalism skills and, among other duties, produced videos to show how the city was making a positive impact in the community through the people who provided these programs and services.

What are the aspects of your job that you find the most interesting or challenging?
As our country becomes more diverse, my role as a communicator can influence how we can bring the government closer to the people we serve. As the daughter of an immigrant, I understand how intimidating government can be and continually look for ways to make it more accessible through communications.

Similar to working in broadcasting with breaking news, I still get an adrenaline rush working in public sector communications as you never know what the day may bring. It’s been exciting to see how technology, including social media, has created so many avenues for the public to become more engaged in their community. Nowadays, local government can connect with community members wherever they are and without a trip to City Hall in order to provide useful information about city initiatives, programs, and services.

How has your work and industry been affected by the pandemic?
Effective communication has never been more needed than during this global health emergency. Cities, states, and countries around the globe have been forced to respond quickly and implement technology swiftly to provide essential services in a socially distanced environment.

I lead our strategic communications team in providing timely, important emergency information to residents, businesses, employees, and other stakeholders. We learned how to work remotely effectively and continue to put in tremendous hours to make sure the public is well-informed about what they need to do to reduce their risk from COVID-19.

What is one thing about you people might be surprised to find out?
I was an extra on a two-part episode of the TV show Friday Night Lights in which I played a reporter. As you can imagine, this role was a natural fit for me.