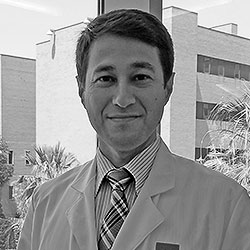 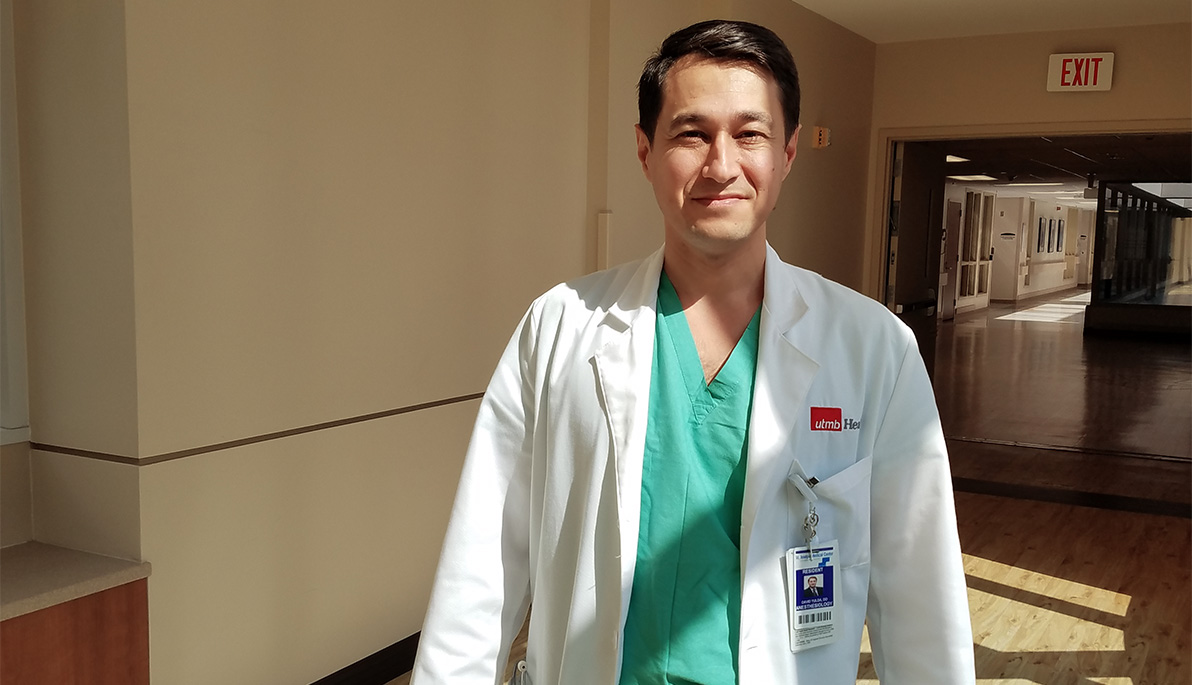 When David Yulda, D.O., Ph.D., had the chance to leave Siberia and move to the United States, he took it. Already a trained doctor specializing in otolaryngology, he and his wife chose to base themselves in New York City. That’s when he discovered NYITCOM’s unique Émigré Physicians Program, which invites foreign physicians to become D.O.s in the United States. The experience also gave him a chance to pursue a long-postponed dream of practicing anesthesiology. Yulda sat down with The Box to talk about his journey.

You have an amazing story. Tell us a little bit about your background and how you came to practice medicine here.
I was born in a former Soviet Union state. I wanted to practice anesthesiology, but after graduating from medical school and completing an internship in general medicine, there was a shortage of the specialty positions and I was not able to get one. I had the opportunity to do an otolaryngology residency position instead, followed by a completion of a research project and my Ph.D. degree.

Believe it or not, I ended up living in Siberia for almost two years where I practiced as an ENT physician. Yes, there was lots and lots of snow! I will never forget when one day, we had a large amount of snowfall...in late May.

One of my dreams was to live in the United States, as it always seemed like the land of opportunity and freedom. I have had this dream since my childhood. In the late 1980s, which was still the time of “the iron curtain,” my father visited the United States for a short time as part of an exchange program for engineers. He told us what an eye-opening experience it was, and he said if I ever had an opportunity to move, I should do so without hesitation.

When my wife and I had the chance to leave Siberia to legally move to the United States, we took it. In hindsight, I can see what a huge risk we took. Neither of us spoke a word of English, and I left behind a successful practice. We basically abandoned everything and stepped into a completely new, unknown life.

I will admit, it was a challenging decision to permanently move to the United States. I was advised not to resign from my Siberian hospital, but just take a leave of absence, try living in America, and see if it was for us. But I have always been an open-minded person, and I had a feeling our bright future was going to be found here, so we decided to move without the plan to return back to Russia.

Why did you choose NYIT? On a friend’s suggestion, we decided to settle in New York City. After the initial cultural shock passed, I started to see this society close up, and I began to recognize that people around here are united by common values and driven by freedoms: freedom to express themselves, freedom to speak their native language without being afraid to be harassed, and freedom to keep their cultural identity up and alive. I loved it. My wife shared the same feeling. It was then we realized that it was the right call to plan to stay here permanently and make our own way in this wonderful country of freedom and opportunity.

I realized that the best plan would be for me to get a U.S. medical degree. First I had to learn English (that took me over a year). Then, I found information about this amazing school, NYITCOM, and the unique Émigré Physician Program, which accepted former foreign physicians.

The curriculum was completely different from what I trained for in Russia. There were huge amounts of information to be “digested” within a short time frame followed by exams. Still, four years sounded so long at the start, but looking back now, the years passed by so quickly.

I am so proud that NYITCOM is my alma mater. The facilities are very well-developed and the faculty is extremely supportive and encouraging. All my knowledge and skills I have now were gained during my time at NYITCOM. Applying the philosophy of osteopathic medicine and the holistic approach in a treatment will definitely help my future patients.

Tell us about what you are doing now—what is your title and what are your general duties?
I am a first-year anesthesiology resident at the University of Texas Medical Branch in Galveston, Texas. The first year includes rotations such as Internal medicine, emergency medicine, and surgery. Then the next three years will include studying and practicing anesthesiology.

What excites you most about your field of study?
In general, it is a privilege for medical professionals to take care of another person using his/her best knowledge. This is why medicine is a life-long learning profession—there are new changes and improvements every day. Medicine is unique in the way it offers opportunities to work in different areas of medicine with diverse populations. And for me, it is a joy to do the job I love. Specializing in anesthesiology puts me on the cutting edge of the medical knowledge and allows me to utilize the best treatment options in critical situations with fast results.

Can you describe a challenge you encountered recently?
When I was accepted to my residency position in Houston, I had to find a way to move my family with all our stuff across the country. Since I love to travel, I decided to buy a big cargo van and drive it all the way to Houston. I encountered so many beautiful places on my way: seeing the crop fields of New Jersey and Pennsylvania, driving along the Appalachian mountains, and crossing the Mississippi River. I tried the unique cuisines of each state I have visited. Overall, the three-day “mission” of driving through 12 states gave me a chance to see the country in a way I have never before experienced!

What advice would you give students who are thinking of coming to the U.S. to study and practice medicine?
Be bold and discover the United States in their own way, it is absolutely worth it. Learn the culture and the system, and work hard to achieve your dreams, even if it means having to start from scratch. Even though at the time it may seem impossible, remember that what might be impossible in other countries may be truly possible in the United States.