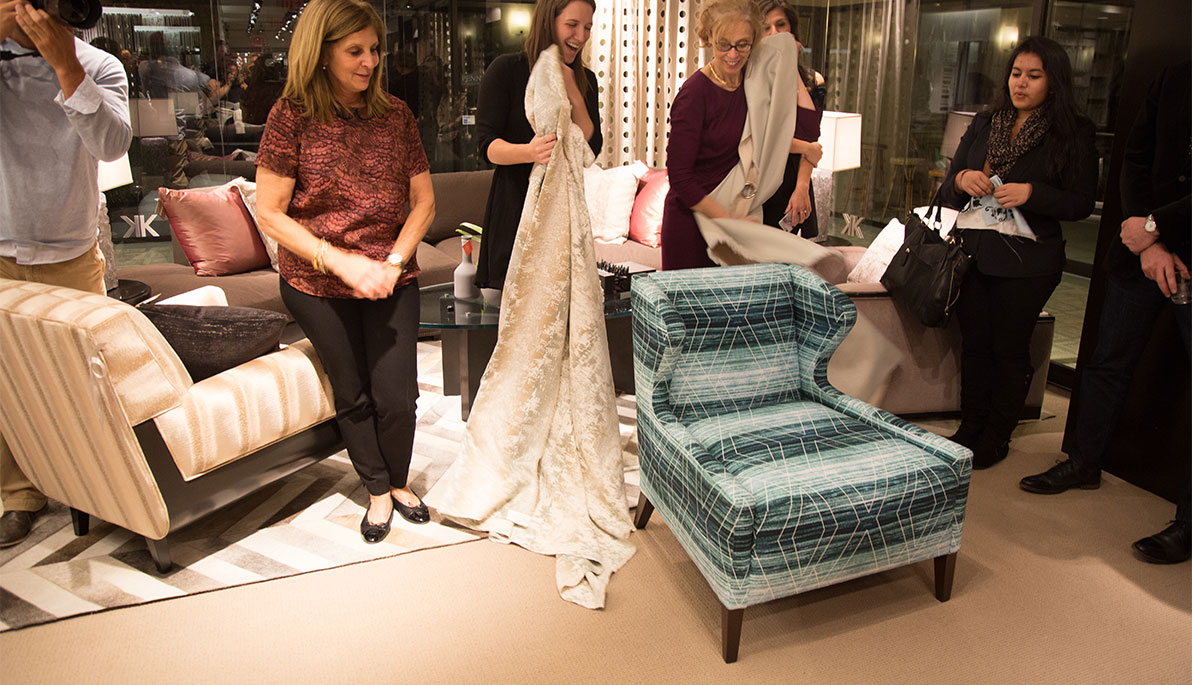 Following a day of intense action, NYIT students edged out tough competition to emerge as champions. It sounds like the set up for a hackathon or a sports victory, but the three students in question are interior designers, and together, they were recently named winners of the prestigious Imagining Textiles 2016 Student Design Challenge.

Sponsored by home furnishings manufacturer Kravet and the American Society of Interior Designers, the competition pairs each competing team, comprised of students from the New York metropolitan area, with a design mentor, and challenges them to create a textile based on a country and its culture assigned to them (in this case Armenia, Bali, France, Ghana, India, and Uzbekistan).

The winning team, which included Victoria Rouse, Destiny Bates, and John Sanchez (who also received a 2016 Angelo Donghia Foundation scholarship), was assigned India. “India’s textiles are largely based on embroidery, which is a hand-stitched embellishment. My teammates and I were fascinated by this and used it to inspire our design,” said Bates. Their goal was to create an abstract version of stitches and thread. “A white zig zag pattern portrayed the stitch and a blue ombre pattern that ran horizontally portrayed the thread,” explained Rouse.

The teams had just one day to complete the challenge. “The all-day process was intense, fast-paced, educational, nerve racking, and fun,” said Bates. “Within a day, we went from creating a sketch, to turning it into an AutoCAD (computer-aided design software) line drawing, developing it into a Photoshop version, and presenting our final design.”

“Through the Kravet Design Grad program, Kravet proves its commitment to supporting the growth and creativity of the future of the industry” said Ellen Kravet, executive vice president of marketing. “With the Imagining Textiles Student Design Challenge, Kravet is able to offer students the opportunity to cultivate worldly exposure to the unique craft of textile making.”

Following the competition, the winning design was reproduced by Kravet and upholstered on a chair. The winner was revealed at a special event two weeks later. The students were thrilled with the result and even more thrilled that their design won first place. “When the chair was revealed, we were shocked and amazed that we won,” said Rouse. “We worked extremely hard during such an intense competition…everybody did an amazing job.”

The chair will be on display in the Kravet showroom at the New York Design Center (one of the interior design industry’s premier resources) until the spring when it will be auctioned off for charity to benefit the Kips Bay Boys and Girls Club. “Knowing that is even more rewarding than winning the competition,” said Rouse.

“The Kravet textile challenge provided a wonderful opportunity for students on so many levels,” said Martha Siegel, associate professor and chair of Interior Design. “It reinforced their understanding of textiles and their use as upholstery fabric, how concept drives a design, and the importance of pattern repeat and scale. It gave them the opportunity to work in teams, network with students from other schools, and meet professionals who served as mentors.”