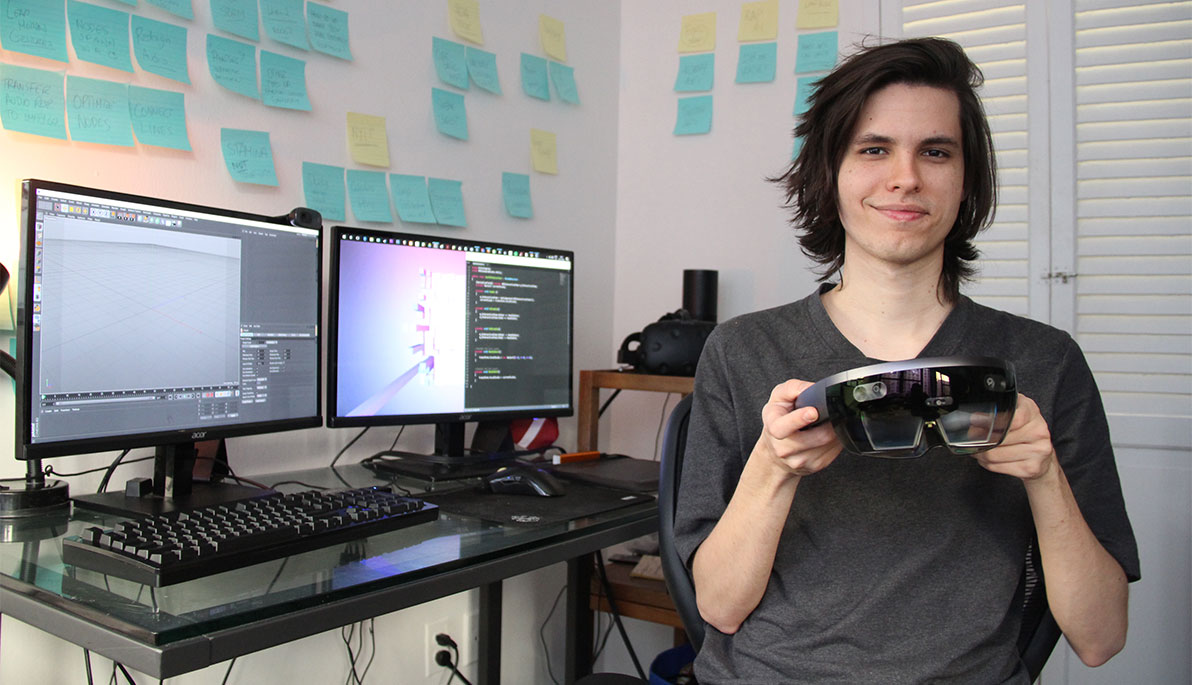 As a computer science major, Lucas Rizzotto (B.S. ’18) began experimenting with Virtual Reality (VR) projects early. Now, the recent graduate is blowing the minds of heavy hitters in the VR industry with his Oculus Rift project Where Thoughts Go: Prologue. The “intimate social virtual-reality experience” received its world premiere at the 2018 Tribeca Film Festival Virtual Arcade on April 18 and won Best in Show: VR at the 2018 Auggie Awards.

In an interview with Oculus.com, Rizzotto said: “I wanted to use virtual reality to create a safe place where anyone could openly share pieces of themselves—a place where you could learn about the minds that make up the world, where openness, kindness, and vulnerability were the base social standard. So I combined my passions for technology, storytelling, and people to create the emotional journey that Where Thoughts Go: Prologue is.”

Watch the trailer and read our original interview with Rizzotto from January 2017 below.

Lucas Rizzotto, a computer science major, is working on Virtual Reality (VR) and Mixed Reality (MR) projects that may one day help us see the world in a new way. Rizzotto sat down with The Box to discuss his research, studies, and what he plans to do after graduation.

The Box: Why did you choose NYIT?
I’m originally from Brazil and always dreamed of working with technology and interaction, but for that I needed to move into the United States. NYIT provided me with a lot of support and a generous scholarship, so that’s what brought me here. It’s been a good experience so far. I’ve had the opportunity to meet some very engaging people, especially in the Manhattan Association for Computing Machinery (ACM) club.

Beat It
Imagine a world that is ruled by the beat of a song. Watch Lucas Rizzotto at HackNY 2016 present SoundScape—a Virtual Reality app that immerses the individual in a world where as a song plays, various elements come alive. See his work in action.

To see more of his work, visit Rizzotto’s website. lucasrizzotto.com

Can you talk about some of your software applications?
ThoughtSpace (an immersive VR experience where you can physically interact with other people’s thoughts in an unknown world) and SoundScape (an immersive VR app that creates a virtual world where as a song plays, various elements come alive using the song’s beat, tempo, frequency, and volume) were developed for two Hackathons: HackNY and HackCooper. Moodia (a puzzle game controlled by the player’s emotion) was developed in my free time.

Do you have plans to market the software you’ve developed?
Good question. The software I’ve been building is very experimental by nature, especially since I'm trying to figure out what unique types of interaction work in the Virtual/Mixed Reality space. So while I don’t plan to market them individually as they are now, a lot of what I’m learning from these projects will carry over into future marketable products I create.

How do you think Virtual and Mixed Reality technologies will be used in the future?
Oh, it’ll change everything! I foresee that every device you own today with a screen (computers, smartphones) will be substituted by MR devices within the next decade. These technologies present an entirely new way of interacting with information that’s fully experiential. I recently wrote an article for Medium.com where I talk about what the near future may look like with these technologies and it’s all very exciting. It’s an entirely new way to perceive the world! I don’t think people realize how close we are to living in a place where you can basically decide what your reality looks like. It’s really the science of magic, and it’s a great time to be part of tech.

How have your studies at NYIT helped you develop these projects?
NYIT is providing me with a strong theoretical foundation in computer science. However, because most of the relevant subjects to MR and VR development are so new, I’ve also been teaching myself as well as others. I started a Virtual Reality Development workshop with other students to fill in those gaps, and we’ve been having great results with it so far.

What new projects are in the works?
Many! I’m currently engaged in a VR research project at NYIT, I’m starting my own mixed reality company, and I have been going to several Hackathons to experiment with new ideas. The list of projects I want to do is vast, and they’re mostly geared around re-envisioning the world with MR technology or creating new ways to learn and teach using these new media.

To see more of his work, visit Rizzotto’s website.

This interview was originally written by Jenny Cheng and has been edited and condensed.