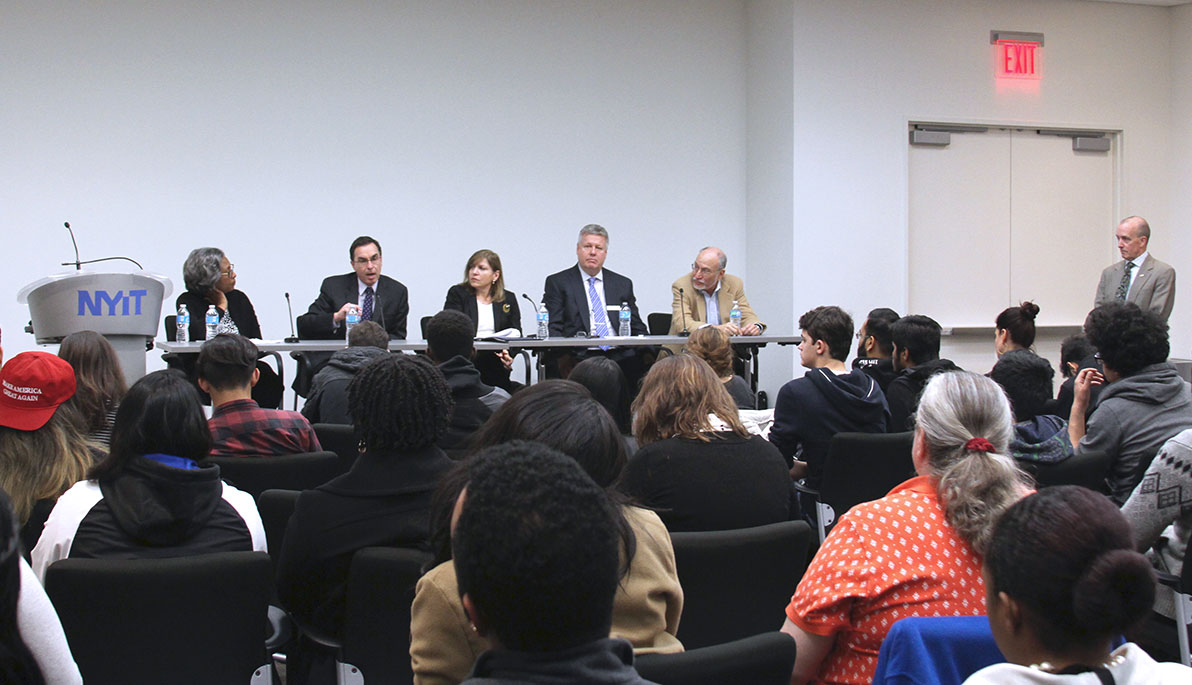 The 2016 election is over, and the results saw Donald Trump coming away with a stunning victory and the Republicans keeping the majority in the House of Representatives and the Senate. On November 9, NYIT faculty members and senior leaders discussed the election at the event The Wednesday After.

Amy Bravo, senior director of international and experiential education, organized the event and opened it by sharing the results of a mock election (see sidebar) held for international students and students under 18 years old. “NYIT students aren’t apathetic, but many simply don’t know enough about politics or how to make the change they wish to see,&rdquot Bravo said to the standing room-only crowd on the Manhattan campus. &ldquotHigher education has a responsibility to help students successfully navigate these two challenges, in and out of the classroom.&rdquot

“Perhaps we’ll come out of this with a better understanding of how to move forward,” said Patrick Love, Ph.D., vice president for student affairs, who moderated the panel.

“There’s something to be said for a new broom sweeping clean,” added James Simon, Ph.D., dean of NYIT College of Arts and Sciences. “We really saw the triumph of social media over traditional media.” Simon, a former journalist for the Associated Press, noted that while Trump reached millions of followers through Twitter, Hillary Clinton far outspent her opponent on television ads.

“The candidates proposed very different agendas,” said Nada Marie Anid, Ph.D., dean of NYIT School of Engineering and Computing Sciences, when asked about Trump's platform. She also raised questions about the future of climate change legislation as well as current proposals for affordable college tuition and funding for education and research. When asked about career prospects for students interested in renewable engineering, Anid reassured the audience that “engineering is here to stay. It’s not political.” She then listed cybersecurity, infrastructure, and telecommunications as important fields that will thrive regardless of the political climate.

Jerry Balentine, D.O., vice president for medical affairs and global health, agreed with Anid that the country currently has a limited idea of Trump’s policies. “Hopefully he’s open to making policies independently,” said Balentine, who added that Trump is not necessarily tied to either party’s platforms. When asked what healthcare will look like in four years, Balentine noted, “[Trump] said he was against the Affordable Care Act, but he hasn’t said ‘no insurance.’”

Richard Pizer, Ph.D., professor of life sciences, voiced his concern that the House Committee on Science, Space, and Technology has subpoenaed scientists and organizations working on climate change. He said that scientists have expressed concern about the increased emphasis on politics in scientific decision-making and research. However, he also compared this contentious election to the election of 1968 and the Great Depression. “I think, historically, as time passes, you put a little more in context,” said Pizer.

Zenna Sewell, senior director of campus life, noted that Trump has no official higher education platform but discussed comments made by his campaign co-chair, Sam Clovis. She mentioned Trump’s remarks that “colleges should have more skin in the game” and that they needed to take on more of the financial risks and responsibilities for student loans and scholarships, including giving more consideration to students pursuing majors with higher earning potential.

After the discussion, the panel addressed student concerns about the potential impact the Trump administration might have on them, and encouraged them to get involved and make their voices heard. Anid and Love recommended joining advocacy clubs and starting new student groups around issues of concern. Pizer and Balentine suggested going to local representatives’ offices and meeting them in person.

The panelists also encouraged students to take advantage of the classroom environment to have open discussions and learn how to filter news. “Faculty members need to let the students know that this is an open space,” said Sewell. “Our tendency is to recede into the background once we’ve voted. You are the ones who make things happen. You are the electorate.”

Love echoed Sewell’s sentiments about the NYIT community. “The work that we do here is for you. You inspire us,” he said. “We are stronger together, all of us, despite our differences.”