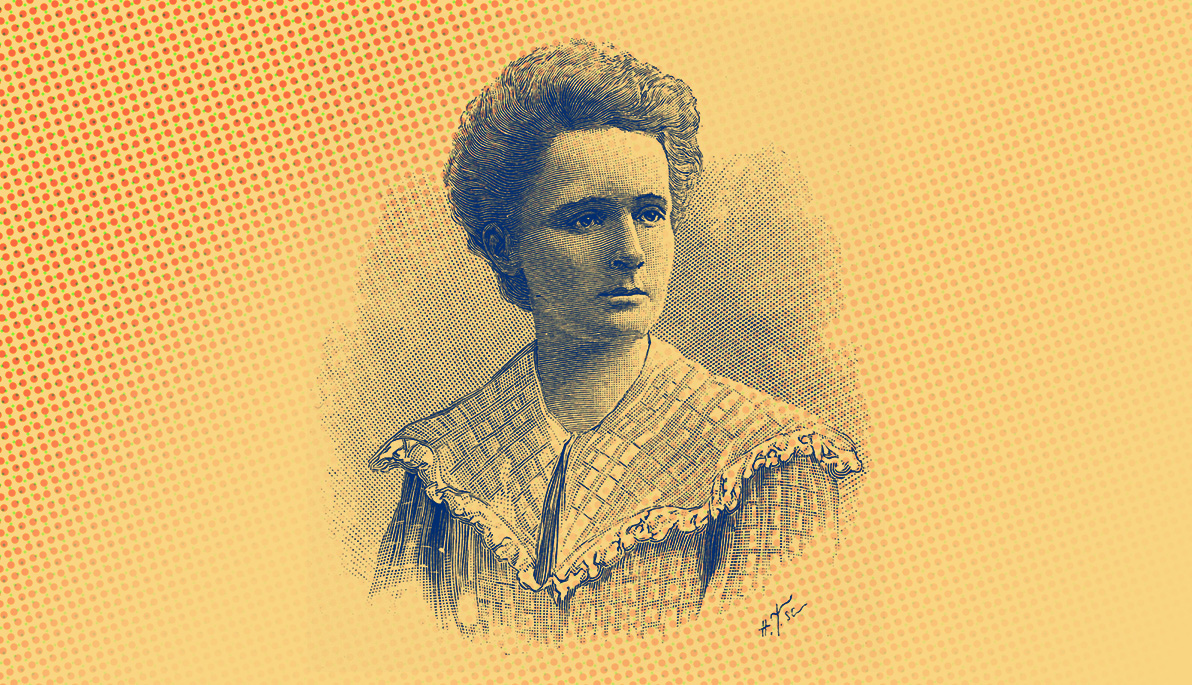 At “Marie Curie’s Life and Work,” part of the Spring 2021 Dean’s Digital Café series, Edward Sierra (M.S. ’91), project engineer at Brookhaven National Laboratory and NYIT College of Arts and Sciences advisory board member, and Elizabeth Donaldson, Ph.D., associate dean of the College of Arts and Sciences, spoke about Curie’s career, her pioneering work, and how Curie paved the way for women in STEM.

Sierra, a history enthusiast, found himself researching Marie Curie in 2017, the 150th anniversary of her birth. Since then, he has become familiar with Curie’s personal and scientific life and has dubbed her the “most iconic female scientist.” Throughout the discussion, he shared fascinating facts about Curie, her family, affairs, and life’s work.

The March 4 event, held during Women’s History Month, highlighted Curie’s many accomplishments as a woman in a male-dominated field. At the age of 24, she enrolled in Sorbonne Université in Paris, France, and was one of the few women enrolled at the school. In 1893, she graduated first in her class with a degree in physics. One year later, she graduated with a degree in mathematics, second in her class. In 1906, Curie became the first female professor to teach at the Sorbonne. She took over her husband Pierre Curie’s position after his untimely death, much to the dismay of her male colleagues, who believed she should retire after being widowed.

Today, women continue to strive for equal representation in STEM fields. According to the American Association of University Women, women make up only 28 percent of the workforce in STEM fields. Despite accounting for more than half of the college-educated workforce, women in the United States make up only 29 percent of those employed in science and engineering occupations. The gender gaps are particularly high in some of the most in-demand and fastest-growing fields, such as computer science and engineering, and the contrast is especially stark for women of color, who account for just 14.1 percent of the nation’s STEM-related bachelor degree recipients. Furthermore, on average, women in computer, engineering, and science occupations were paid an estimated 80.7 percent of men’s annual median earnings.

“Marie Curie made trailblazing scientific discoveries: she is the first woman to win a Nobel Prize and the only person to win the Nobel in two different fields. But what is really remarkable is that she pursued her research at a time when she was often the only woman in the room,” said Donaldson. “She reminds us of the importance of diversity and representation in STEM fields. When science is inclusive of people from a diversity of identities and backgrounds, we can all benefit.”

In her personal life, Curie did not allow social and beauty standards to hinder her self-confidence or commitment to work. Sierra shared that when Curie got married, she requested a plain, dark gown so that she could re-use it and wear it in the lab.

She did much of her work in a small shed, exposing herself in extended periods to radiation as she worked on her studies, but finding it all worth it as she made discoveries and received her Ph.D. on “Researches on Radioactive Substances” in 1903. Throughout her career and time working in the shed, Curie discovered Radium, Polonium, and radioactivity, even coining the term radioactive. She won Nobel Prizes in both Physics (1903) and Chemistry (1911), and at first, was not going to receive her first Nobel Prize. Instead, her husband was going to, but he insisted that she got her credit as the studies were Marie’s ideas, shared Sierra.

Through all of this, she also raised two daughters, one of whom followed in her footsteps to become a Nobel Prize-winning scientist. Curie was able to have both a career and a family, something that was almost unimaginable for women at the time. She passed away from aplastic pernicious anemia, the result of radiation exposure, at age 66 in 1934. Even in death, Curie broke boundaries, becoming the first woman to be buried at France’s Panthéon on her own accord.

Considering the gender gap that persists today, Curie’s crack in the glass ceiling—made more than 100 years ago—is even more impressive. Though a great many strides must still be made, many would agree that the journey for improved representation may not have been possible without Curie’s earlier steps.