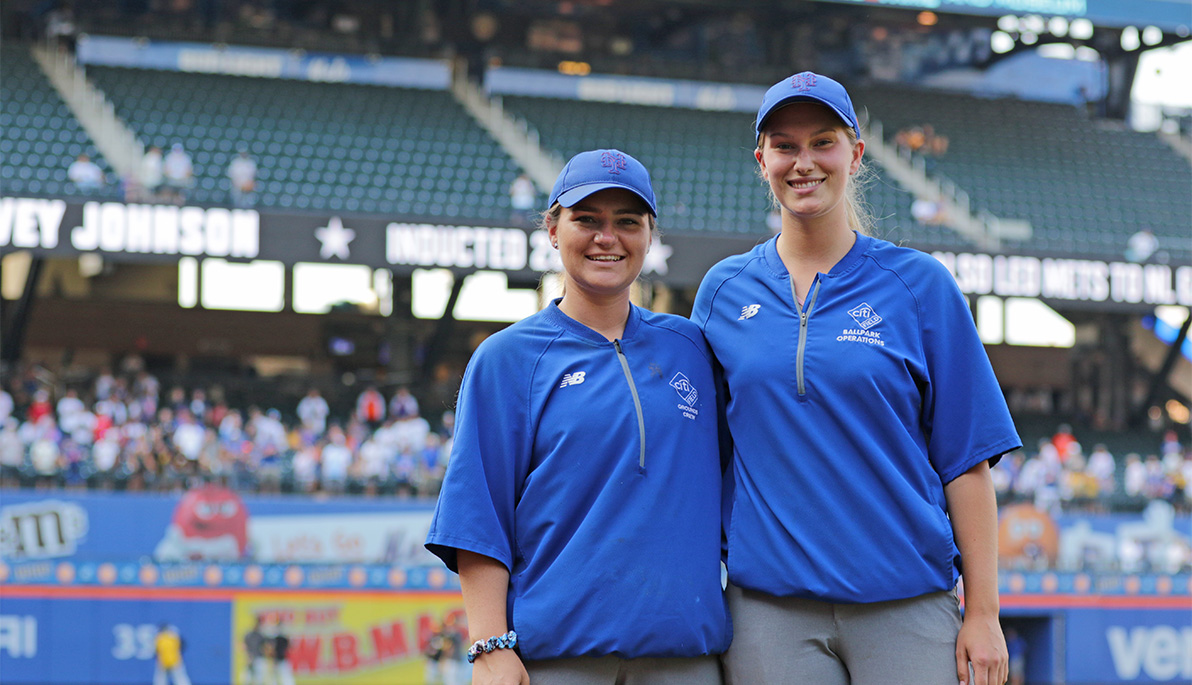 Two members of the New York Tech softball team are getting an up-close look at Major League Baseball this summer.

Infielders Sydney Kratzert and Brooke Scherer are working with the New York Mets grounds crew at Citi Field, rolling the tarp during rain delays, preparing the bullpen mounds pregame, and assisting with getting the batting practice equipment including the screens and used bases off the field before the first pitch.

“I wanted to stay in New York over the summer and get an internship. And this is a once-in-a-lifetime experience,” said Kratzert, who was raised in Arizona and now lives in Florida. “How often do you get to be on a Major League Baseball field, and be a part of it? It’s kind of cool. The people you see coming on and off the field is the best part.”

Added Scherer, “I always knew that I wouldn’t be able to play professionally, so getting to be on the grounds crew is the next best thing for me. I’ve been a Mets fan for life, so it’s awesome being there. And I love the physically demanding part of the job. I’ve worked desk jobs during the summer before, and it’s incomparable to working for the Mets.”

They are the only two women on the Citi Field grounds crew this season, although there was one female member last year who “set the bar high,” according to Kratzert.

“There are times it’s hard,” Kratzert said. “It’s physically demanding. It’s like doing [medicine] ball slams over and over and over again. Even with that part, it’s fun because we’re used to it. We’ve played softball our whole lives. Sometimes the tarp can be a whirlwind. If you don’t know exactly what’s going on, you’re going to get hurt.”

Kratzert is doing double-duty in Flushing, N.Y. During the day she works as an accounting intern with a brewery at Citi Field, then changing for her evening grounds crew work. Kratzert, who hit .281 with two homers and 24 RBIs last season, is an accounting major entering her senior year in the fall.

Her highlight so far has been the Subway Series, in part because she could make her Yankees-fan father jealous. “My father is a huge Yankees fan,” Kratzert said. “Seeing Aaron Judge and Gary Sanchez up close was great … [as well as] getting to rub it into my father’s face a little bit.”

Scherer, also a rising senior from Westbury, N.Y., earned second-team All-East Coast Conference honors in the spring after hitting .289 with two homers and 10 RBIs in 31 starts.