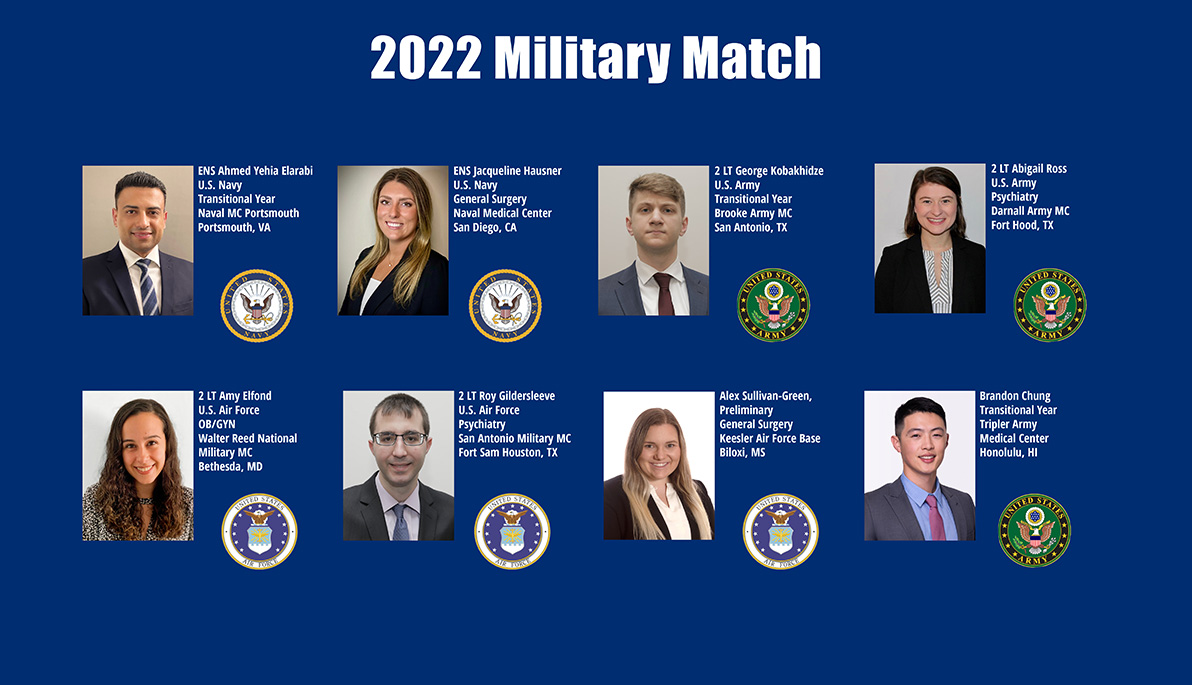 Upon completing medical school, physicians must complete a residency training program and obtain a medical license to practice in the United States and become board certified in a specialty. Medical residencies last three to five years for primary care physicians, with other specialties requiring additional years. While the “civilian” match will take place on Friday, March 18, 2022, medical students, including those at NYITCOM, who committed to military service for their residency are matched a few months earlier.

After graduation from NYITCOM, the future physicians will begin their Graduate Medical Education (GME) in conjunction with service to their country. They will take the military oath of office at NYITCOM’s 2022 hooding ceremonies this spring.

Physicians enlisted in the military deliver healthcare services to military personnel and their families and work in a variety of settings, including hospital ships and international medical centers, among others. Much like civilian doctors, their daily responsibilities include treating patients, diagnosing illness, and prescribing medicine. Military physicians may also participate in international relief and humanitarian efforts, helping to care for the victims of natural disasters and other events requiring medical stability assistance.

“My active-duty residency experience will prepare me for a future career in medicine because I will be trained in some of the best skills any doctor can carry forward with them: flexibility and teamwork,” said Alex Sullivan-Green of NYITCOM-Arkansas, who will be the first military member in her family. “Serving as a military officer in addition to being a doctor demands just as much character and leadership development as it does medical and clinical skills, and for this upcoming opportunity, I am so grateful.”

In November, NYITCOM alumni also shared their experiences serving in the military. They spoke about the difference between medical training in the military system and civilian standards, how the experience has impacted their careers, and specific benefits of being trained by the U.S. Armed Forces. Learn more.