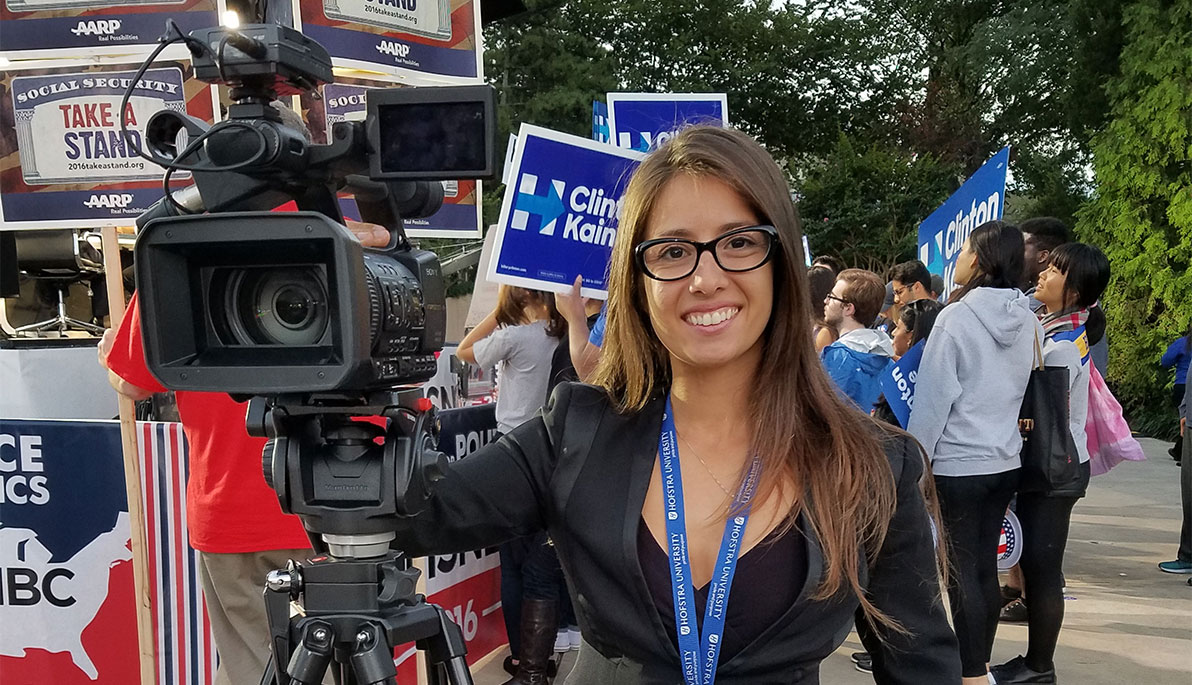 While most of us watched the presidential debate between Hillary Clinton and Donald Trump on September 26 from the comfort of home, one NYIT student got a front row seat. Just four days before the event, Maylan Studart, a communication arts major, was asked to cover the debate for PATV Long Island, a local public access television station. (She had worked for the station as a news anchor this past summer.) The budding journalist, currently interning at the Department of Public Information at the United Nations (U.N.), spoke with The Box about her experience and what she took away from attending this historical event.

The Box: Tell me about your experience at the debate.
Maylan Studart: Being at the epicenter of the most important conversation in the United States was a dream come true. As a political and news junkie, I was living my dream covering the first presidential debate for PATV Long Island. I enjoyed taking the pulse of our Long Island community by interviewing them for PATV’s election coverage and it just strengthened my thought that I want to be a political journalist.

How did your studies at NYIT help you prepare for covering the presidential debate?
Taking the Globesville class expanded my knowledge of what goes into reporting—from working in the field to the newsroom. Globesville is a class where you create your own show with a team. You brainstorm and write, and execution comes in the form of producing, directing, editing, and presenting. Going through the pains of creating a news show gave me a better understanding of how to deal with technical difficulties, what to expect, and how to create the best program—which helped in my reporting on the debate.

What was the most important thing you learned?
That my career in journalism is not the monster I thought it would be. I had a lot of doubts and questions, but now that I have seen that I can do the job, I am much more confident in pursuing bigger positions. I learned that all reporters are trying to do a good job and nothing will ever be perfect.

Was there anything that surprised you at the debate?
Yes. The fact that even Long Island is split down the middle in terms of who to vote for, Trump or Clinton. I also found that a lot of people are undecided, and that was somewhat surprising. It seems to me that there is no predicting this election and it will all depend on which voters turn out to cast their ballot.


What have you taken from this experience?
I lived my dream this week. First, I worked for the U.N. General Assembly, where I got the chance to meet Obama and Biden and all the world players I’ve read about. Then, I got the call to report on the first presidential debate for PATV. Two years ago, I would never have imagined that I would be inside the U.N. General Assembly hall or reporting on the debate alongside CNN reporters. I got immense experience from this, from learning about preparation, to logistics, to presenting. I believe I have grown professionally after this experience.